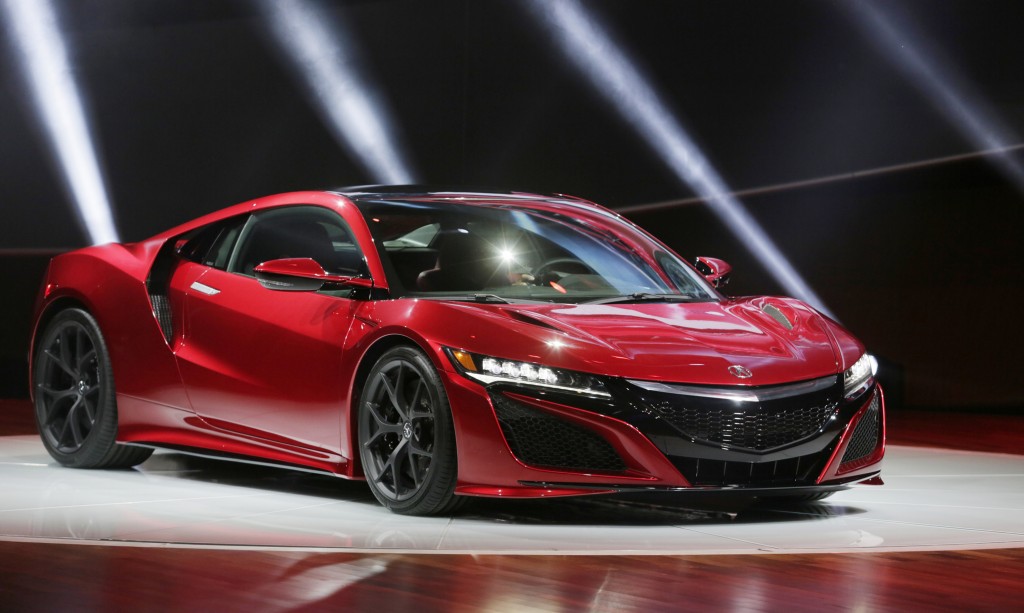 Acura is moving to reinvent itself with the reintroduction of its Ferrari-fighting NSX supercar at the North American International Auto Show in Detroit on Monday.

Once a sporty and innovative brand, Acura has in recent years churned out a string of sedans and SUVs not all that distinctive from the Accord and Pilots sold by its Honda Motor Co. corporate parent.

But the low-slung NSX that made its debut Monday is as arresting as Acura’s original NSX that debuted more than two decades ago.

Technologically, however, they are generations apart.

The first generation was a rear-wheel-drive sports car sold from 1990 to 2005. The 2016 NSX is an all-wheel-drive hybrid supercar.

It features a twin-turbocharged V-6 nestled behind the two-seat cockpit. The gasoline engine is paired with a suite of electric motors — one mounted near each of the front wheels and a third housed in the transmission and supplements power going to the rear wheels. The drivetrain produces 550 horsepower.

The old NSX was renowned for its sublime handling — courtesy of a lightweight aluminum body — and a smooth-revving 270-horsepower V-6 engine. It gave Acura an image as an upstart Japanese automaker that could go head-to-head with the blue-blooded European sport cars.

But Acura didn’t follow up with other sporty models. Instead, it fell into a pattern of producing reliable and predictable sedans and sport-utilities, but little that struck a chord with driving enthusiasts.

“Acura focused on playing it safe and not pushing the envelope when other luxury brands have performance divisions which help enhance their sporty images,” said Jessica Caldwell, an analyst at car-shopping company edmunds.com.

Reviving the NSX demonstrates that Acura is looking once again to tie its fortunes to performance cars.

“Bringing back a passion project like the NSX is a bold move, and one Acura needed to show that the brand can still step outside its comfort zone,” Caldwell said.

Not only will the new car bring Acura attention, it also will trigger a cascade of technology and design knowledge into the automaker’s other products.

“The technology car can trickle down to your other projects,” Accavitti said. “The person buying an ILX (Acura’s entry-level sedan) can think there is a little bit of the NSX in their car.”

Acura said the car will start in the $150,000 range when it comes to market later this year, similar to competitors like the Porsche 911, Audi’s R8, Mercedes-AMG’s GT S and Aston Martin Vantage.

The NSX was designed at Acura’s Torrance design studio while the powertrain was developed in Japan. It will be built at a dedicated factory in Ohio.

During the design process, the engine changed from a transverse mounted, normally aspirated V-6 seen in the first concepts to a longitudinal, 75-degree twin turbocharged twin-turbo V6 mated to a 9-speed dual clutch transmission.

The change forced the exterior designers to alter the body so that the engine could get the proper air flow. The result is a design that is more aggressive and exotic compared with a concept car because it has more and bigger vents woven into the body and front grille.

One of the car’s most distinctive features is the flying c-pillars at the rear of the cabin that direct air onto the rear deck to create a downward force on the vehicle to improve handling.

Still, the new model holds over design cues from the previous version, including the all-black roof and tail light that spans the rear.

It needed to be light but powerful, he said. It needed technology that aided the driver but didn’t interfere with the driving experience. It needed a center of gravity as low to the ground as practical to provide the road handling characteristics expected of a super car.

“The driver is the smartest part of the car,” Klaus said.

The NSX won’t be a big seller. But Honda, which sells Accords, Civics and CR-Vs by the hundreds of thousands, doesn’t need the NSX to reap billions of dollars in sales.

Rather, it is looking at the car as the ultimate expression of the Acura brand, Klaus said.

Although she still needs to drive the car, Caldwell believes the NSX is likely to achieve that goal.

“This move will breathe life into Acura, as the vehicle is iconic and its reintroduction will undoubtedly generate a lot of buzz,” Caldwell said.