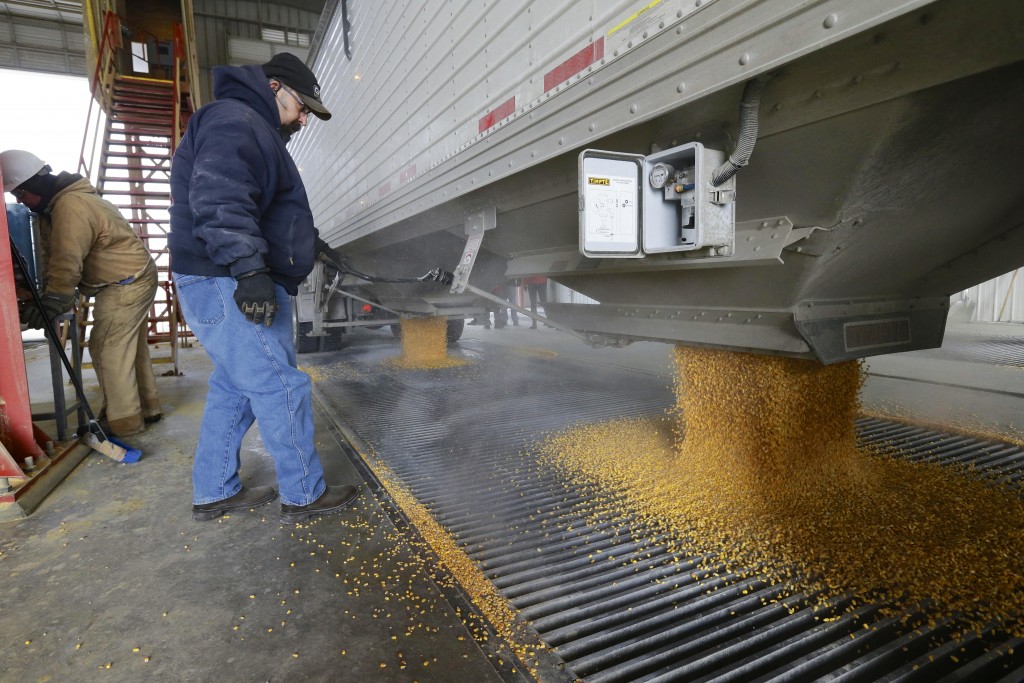 Roughly 100 grain trucks a day filled with corn continue to flow into the Green Plains ethanol plant in southwest Iowa – even as crude-oil prices continue to collapse.

Oil prices may have dipped below $50 a barrel for the first time since April 2009, but ethanol plants across the nation continue to operate at a brisk pace in order to satisfy a domestic and export demand that hasn’t weakened.

The cheap oil will likely cut into ethanol profits, because refiners will want to pay less for the corn-based fuel additive, but the industry is somewhat shielded by a federal biofuel mandate and the need to boost octane in gasoline. Plus, ethanol producers could thrive beyond the current strong demand if exports or gasoline consumption grow more than expected.

Ethanol accounts for about 10 percent of U.S. gasoline and remains cheaper than anything else refiners could use to deliver the octane varieties drivers expect at the pump such as premium gasoline.

“I think we have a permanent place in the fuel supply,” said Todd Becker, CEO of Omaha, Nebraska-based Green Plains.

But the federal biofuels standard, which plays an important role in the ethanol market, could change sometime this year. The Environmental Protection Agency has suggested it might relax some of the targets that Congress has set, such as lowering the 2014 corn-based ethanol standard from 14.4 billion gallons to 13 billion gallons. Yet, industry experts think it’s unlikely the standard will be reduced significantly from current levels.

Even with the unknowns, ethanol producers can count on domestic demand of about 13.5 billion gallons as long as gasoline consumption remains around 135 billion gallons a year, University of Illinois agricultural economist Scott Irwin said. That could grow if consumers – spurred by low gas prices – decide to drive more or invest in larger vehicles, but Irwin noted that generally only happens once consumers believe the cheaper gas prices are permanent.

Another factor is the export demand, with other countries buying about 400 million to 500 million gallons annually to meet their own renewable-fuel requirements, Irwin said.

Historically, ethanol’s price has rarely exceeded the price of the petroleum blend that refiners use to make gasoline, but ethanol has recently been selling for nearly 1.4 times the price of the blend stock.

Ethanol plants also find profitability through selling a byproduct called distillers grain that’s used as a livestock feed – a market that could grow, as China recently relaxed restrictions on importing the feed.

The oil-price slide has been relatively abrupt, as a barrel sold for $107 as recently as last June. If the cheap oil prices prompt oil producers to scale back their operations in the Bakken region of North Dakota and Montana, it might become easier and cheaper for ethanol producers to deliver their product, Becker said.

As it stands, much of the oil from that region is shipped in railroad tank cars, making it more expensive for ethanol companies to lease tank cars.

“There are a lot of pieces in the equation, and I don’t think the story is written yet,” said Becker, who runs the fourth-largest ethanol producer in the U.S.

But even if the ethanol industry sees smaller profits in 2015, it is in a better position to withstand a lean period than it was during the severe drought of 2012 or the Great Recession. Ethanol producers have consolidated, reduced debt and improved their operations, and several of the biggest ethanol producers have other business interests, such as agribusiness giant Archer Daniels Midland and refiners Valero Energy and Flint Hills Resources.

The ethanol companies around today know how to operate plants efficiently and can better handle the cycles of the market, according to Todd Sneller, administrator at the Nebraska Ethanol Board.

“I think the industry has really matured and positioned itself to operate at times when margins are small.”