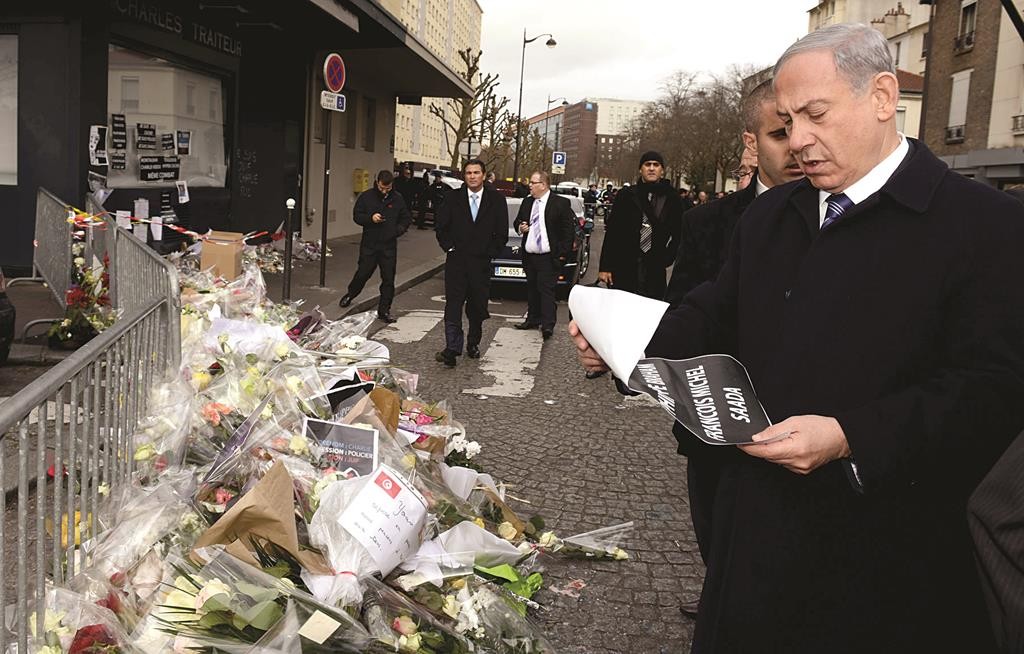 Israeli Prime Minister Binyamin Netanyahu made a brief visit to the Hyper Cacher kosher market in Paris, the site of the attack where four French Jews were murdered.

Netanyahu said he expected the world leaders who marched against terrorism in the streets of Paris on Sunday to fight terror “even when it is directed at Israel and the Jews.”

“There is a direct line between the attacks of the Islamic extremists around the world and the attack here at the center of Paris.”

A small crowd of French Jews greeted Netanyahu near the site, waving Israeli flags and singing songs such as Yerushalayim shel Zahav (Jerusalem of Gold).

Afterward, the prime minister flew back to Israel.

Earlier in the day, Netanyahu answered critics who said that his trip to Paris was unnecessary and politically motivated, coming as it did in the midst of an election campaign at home.

Preparations were being made for the levayah of the four Kedoshim, Hy”d, on Tuesday.

The bodies of the four, along with members of their families, are due to land at Ben-Gurion International Airport on Tuesday morning. The levayah is scheduled for 12:00 p.m. at the Givat Shaul Cemetery in Yerushalayim.

Culture Minister Limor Livnat chaired a special meeting on Sunday night to work out details with relevant government offices, including the Cabinet Secretariat, the Foreign Ministry, the Defense Ministry, the Finance Ministry, the Interior Ministry, the Religious Services Ministry, the Airports Authority, the Police, the Jewish Agency, the President’s Residence, the National Information Directorate and the Yerushalayim Municipality.