Israel Murdered Jews to Be Buried in Yerushalayim
Israel 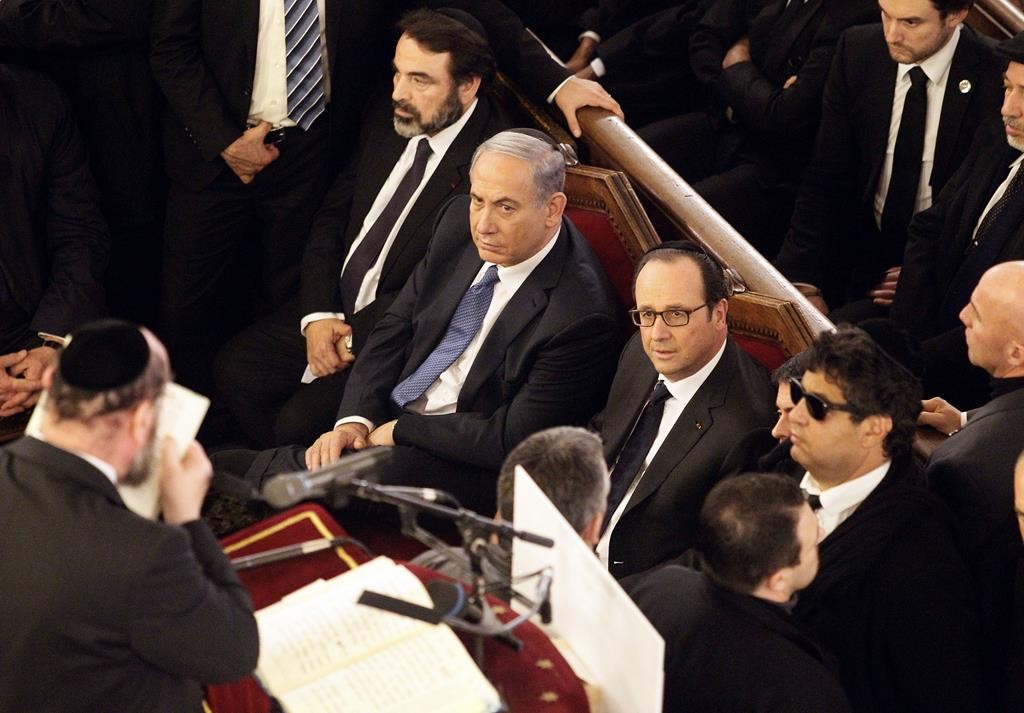 Prime Minister Binyamin Netanyahu announced on Sunday that the four victims of the massacre in a Parisian kosher market will be buried in Israel, at the request of the families.

The prime minister led a delegation of Israeli officials in the historic march for solidarity against terrorism in Paris on Sunday, where he walked in the front row, linked arm-in-arm with French President Francois Hollande, German Chancellor Angela Merkel, former French president Nikola Sarkozy, among dozens of leaders from around the world.

In a statement issued from Paris, Netanyahu said he had “acceded to the request of the families of the victims of the murderous terror attack” and directed “all the relevant government bodies” to assist in bringing the bodies to Israel. The levayah for Yohan Cohen (22), Hy”d, Philippe Braham (40), Hy”d, François-Michel Saada, Hy”d (believed to be in his 60s), and Yoav Hattab (21), Hy”d, was tentatively set for Tuesday. It was reported that at least three of the Kedoshim would be buried on Har Hazeisim.

Soon after the tragedy occurred, Netanyahu spoke with French President Francois Hollande and with French Prime Minister Manuel Valls. Netanyahu began the conversation in French and told President Hollande, “The entire people of Israel are with you.” He added, “Our hearts are with the families of the victims. Israel offers any assistance that France needs.”

“I commended the determination with which the French authorities eliminated the terrorists, these murderers, and I also commended the courage of the French security services. But this is not enough. In order to fight terrorism, it is essential to strike at its sources of financing and at the centers of incitement that encourage these murderous acts throughout Europe. It is also essential to take action against countries that give support, shelter and passage to terrorism,” Netanyahu said in a statement released by his office.

Netanyahu recounted that he had spoken by telephone with Celine Shreki, a hostage who survived the nightmare and is recovering. “She told me about the terrorist’s inconceivable cruelty and of the heroism of the young Jewish man who attempted to seize his weapon and shoot him; he was shot by the terrorist and died about 45 minutes later.”

Netanyahu asked Hollande to maintain heightened security at Jewish institutions even after the return to routine.

After the march, Hollande and Netanyahu went to the Grand Synagogue in Paris for a memorial ceremony. The synagogue had closed its doors on Leil Shabbos, the first time since World War II that the landmark of Jewish life in Paris was shuttered on Shabbos, according to the Orthodox Union.

There Netanyahu lauded France’s “firm position” against the “new anti-Semitism” and terrorism; but he again reminded the Jewish population that they are welcome in Israel.

He also thanked Lassana Bathily, a Muslim worker at the Hyper Cacher supermarket who saved the lives of six people by hiding them in the store’s walk-in freezer.

However, a call by the Israeli prime minister for French Jewry to leave for Israel en masse in the wake of a “rising tide of anti-Semitism,” although nothing new, has because of the timing, been greeted with dismay in some quarters.

An Israeli governmental committee is to convene in the next few days to examine ways to facilitate Jewish immigration from France and other European countries.

“If 100,000 French people of Spanish origin were to leave, I would never say that France is not France anymore. But if 100,000 Jews leave, France will no longer be France. The French Republic will be judged a failure,” Valls said on Sunday.

“Jews were sometimes marginalized in France, but this was not Spain or other countries — they were never expelled, and they play a role in the life of France that is central,” Valls said, adding, “To understand what the idea of the republic is about, you have to understand the central role played by the emancipation of the Jews. It is a founding principle.”

Valls conceded that “there is a new anti-Semitism in France” but said that it stems from economic frustration and political anger at Israel: “This new anti-Semitism comes from the difficult neighborhoods, from immigrants from the Middle East and North Africa, who have turned anger about Gaza into something very dangerous. Israel and Palestine are just a pretext. There is something far more profound taking place now.”

Meanwhile, over the weekend, an information fair about immigration to Israel sponsored by the Jewish Agency drew hundreds of participants. The event, in central Paris, took place under heavy security. It had been planned in advance of the past week’s tragic events.

Agency chairman for Israel, Natan Sharansky, who accompanied Netanyahu to Paris, attended the fair and said: “We embrace the French Jewish community at this difficult time and extend our full support by helping to provide for the physical security of Jewish communities across France, increasing our assistance to any individual who wishes to immigrate to Israel, and working to ease immigrants’ integration into the Israeli workforce and Israeli society.”

In Yerushalayim, hundreds of people, mostly from the French-Israeli community, gathered under the auspices of the municipality at City Hall on Sunday.

They held black placards reading “Israel is Charlie,” “I’m a Jew from France” and “Yerushalayim is Charlie.”

Mayor Barkat echoed Netanyahu’s call for French Jews to come to Israel, and said that he was setting up a special situation room manned by French-speaking volunteers to help in absorbing the wave of French immigrants.

Barkat also announced plans for a memorial in Paris, and the hanging of 1,500 municipal, French and Israeli flags around Yerushalayim.

At a gathering in Tel Aviv, Rabbi Eytan Sitbon, said: “There are occurrences in life that are private tragedies, but what happened yesterday was not a private incident. The entire nation of Israel was hurt, and because of this we are all here and everyone must wake up and see themselves as though our brother was wounded there and build upon this pain.”