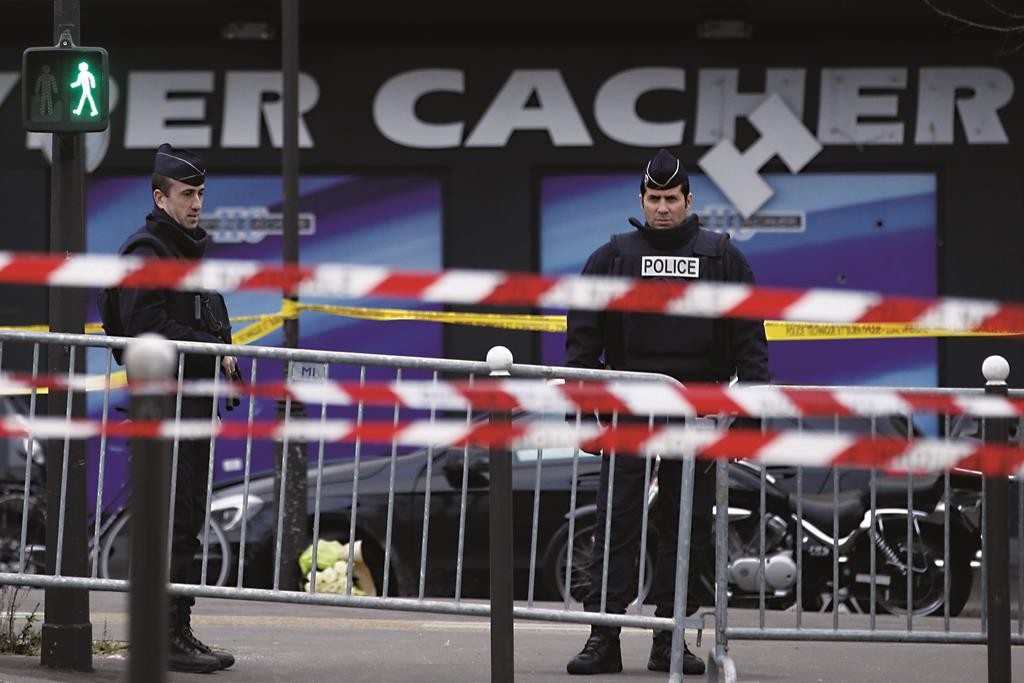 France vowed to combat terrorism with “a cry for freedom” after three days of bloodshed that horrified the world.

The three days of terror began Wednesday when brothers Said and Cherif Kouachi stormed the newsroom of Charlie Hebdo, killing 12 people including two police officers. On Thursday, police said Amedy Coulibaly killed a policewoman and the next day he seized hostages at Hyper Cacher kosher supermarket at Porte de Vincennes in east Paris while the Kouachi brothers were in a standoff with police at a printing plant near Charles de Gaulle airport.

It all ended at dusk Friday with raids that left the three terrorists dead. Four hostages at the market were killed early in the attack, while 15 others were freed.

Five people held in connection with the attacks were freed over the weekend, leaving no one in custody, according to the Paris prosecutor’s office. Coulibaly’s widow, last seen near the Turkish-Syrian border, is still being sought.

France remains on high alert while investigators determine whether the attackers were part of a larger extremist network. More than 5,500 police and soldiers were deployed on Sunday across France, guarding marches, shuls, mosques, schools and other sites.

That attack Wednesday was the first act in France’s worst terrorist attacks in decades.

While the prime minister called Sunday’s march a “cry for freedom,” a witness to the kosher market massacre said the country isn’t taking the Islamic extremist threat seriously enough.

“We’re a country at war,” said Daikh Ramdan, 28, manager of a nearby service station. “We haven’t understood.”

Meanwhile, French radio RTL released audio Saturday of Amedy Coulibaly, speaking by phone from the kosher supermarket where he killed four hostages, in which he lashes out over Western military campaigns against extremists in Syria and Mali. He describes Osama bin Laden as an inspiration.

The focus of the police hunt is on Coulibaly’s widow, Hayat Boumeddiene. Police named her as an accomplice of her husband in the shooting of a policewoman and think she is armed.

But a Turkish intelligence official told The Associated Press on Saturday that a woman by the same name flew into Sabiha Gokcen, which is Istanbul’s secondary airport, on Jan. 2, and that she resembled a widely distributed photo of Boumeddiene.

Turkish authorities believe she traveled to the Turkish city of Sanliurfa near the Syrian border two days later, according to the official, who added: “She then disappeared.”

He spoke on condition of anonymity because he was not authorized to speak on the record.

The French president held an emergency security meeting Saturday and Interior Minister Bernard Cazeneuve said the government is maintaining its terror alert for the Paris region at the highest level while investigators determine whether the attackers were part of a larger extremist network.

Five people are in custody in connection with the attacks, and family members of the attackers have been given preliminary charges.