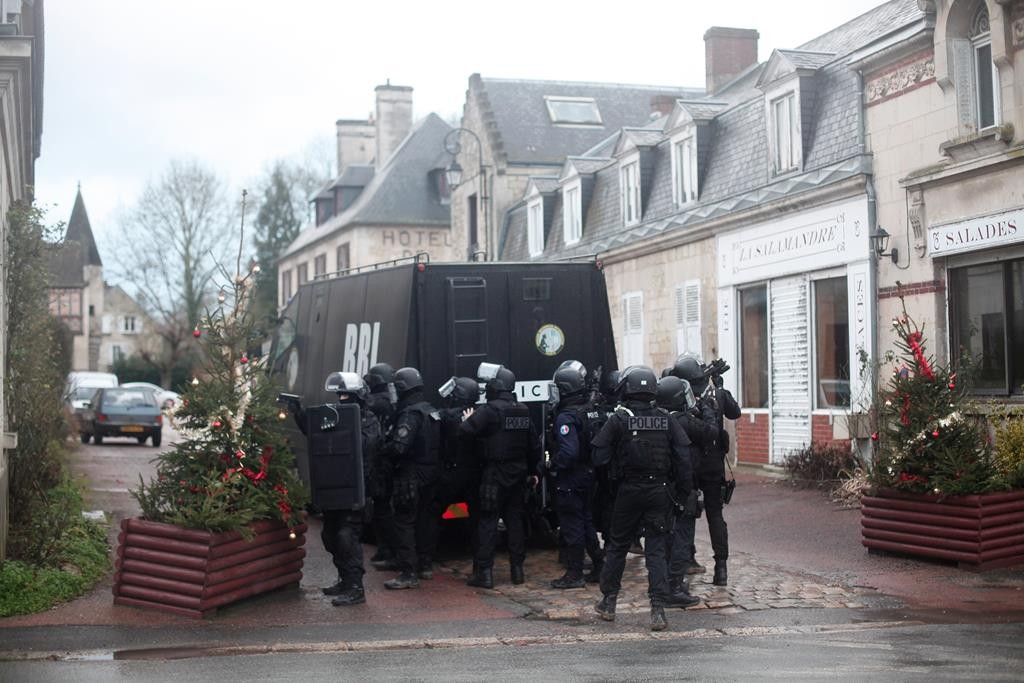 Armed and masked anti-terrorism police swooped on woodland villages northeast of Paris on Thursday in a manhunt for two brothers suspected of being the Islamist terrorists who killed 12 people at a French satirical weekly.

A day after the Paris attack, officers carried out house-to-house searches in the village of Corcy, a few miles from a service station where police sources said the brothers were sighted in ski masks. Helicopters flew overhead.

The fugitive suspects are French-born sons of Algerian-born parents, both in their early 30s, and already under police surveillance. One was jailed for 18 months for trying to travel to Iraq a decade ago to fight as part of an Islamist cell. Police said they were “armed and dangerous”.

In Paris, a policewoman was killed in a shootout with a gunman wearing a bulletproof vest on Thursday morning, setting a tense nation further on edge. Police sources were unable to say whether that incident was linked to the previous day’s assault at the weekly paper, but the authorities opened another terrorism investigation.

Bewildered and tearful French people held a national day of mourning. The paper had been firebombed in the past for printing cartoons that poked fun at Islam and some that mocked the founder of Islam.

Two of those killed were police posted to protect the paper.

Police released photographs of the two suspects, Cherif and Said Kouachi, 32 and 34. The brothers were born in eastern Paris to Algerian parents who died when they were still children.

The younger brother’s jail sentence for trying to fight in Iraq a decade ago, and more recent tangles with the authorities over suspected involvement in terrorist plots, raised questions over whether police could have done more to watch them.

Cherif Kouachi was arrested on Jan. 25, 2005 preparing to fly to Syria en route to Iraq. He served 18 months of a three-year sentence.

In 2010 he was suspected of being part of a group that tried to break from prison Smain Ali Belkacem, a terrorist jailed for the 1995 bombings of Paris train and metro stations that killed eight people and wounded 120. The case against Cherif Kouachi was dismissed for lack of evidence.

A third person wanted by police, an 18-year-old man, turned himself in to police in Charleville-Mézières near the Belgian border late on Wednesday. A legal source said he was the brother-in-law of one of the brothers. French media quoted friends as saying he was in school at the time of the attack.

In the wake of the killings, authorities tightened security at transport hubs, religious sites, media offices and stores. Police also increased their presence at entry points to Paris.

Meanwhile, a lawyer for the magazine, Richard Malka, said it would be published next Wednesday with one million copies compared to its usual print run of 60,000.