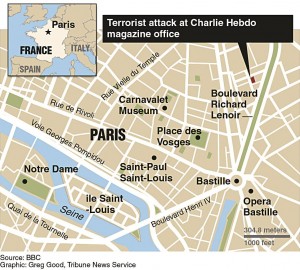 Hooded terrorists stormed the Paris offices of a satirical magazine known for lampooning Islam on Wednesday, killing at least 12 people in the most deadly terrorist attack on French soil in decades.

Police staged a huge manhunt for the attackers, who escaped after shooting dead some of France’s top cartoonists at the Charlie Hebdo weekly, which included an 80-year-old French Jew, Georges Wolinski, as well as two police officers.

One of the assailants was captured on video outside the building shouting “All-ahu Akbar!” as shots rang out. Another walked over to a police officer lying wounded on the street and shot him point-blank with an assault rifle, before the two calmly climbed into a black car and drove off.

The official described the scene in the offices as carnage, with a further four wounded fighting for their lives.

Tens of thousands joined impromptu rallies across France in memory of the victims and support for freedom of expression. The government declared the highest state of alert, tightening security at transport hubs, religious sites, media offices and department stores as the search for the assailants got under way.

Charlie Hebdo (Charlie Weekly) is well known for courting controversy with satirical attacks on political and religious leaders of all faiths and has published numerous cartoons ridiculing the founder of Islam. Jihadis online repeatedly warned that the magazine would pay for its ridicule.

The last post on its account mocked Abu Bakr al-Baghdadi, the leader of the terrorist group Islamic State, which has taken control of large swathes of Iraq and Syria and called for “lone wolf” attacks on French soil.

There was no claim of responsibility. However a witness quoted by 20 Minutes daily newspaper said one of the assailants cried out before getting into his car: “Tell the media that it is al-Qaida in Yemen!”

Supporters of Islamic State and other jihadi groups hailed the attack on internet sites. Governments throughout Europe have expressed fear that fighters returning from Iraq or Syria could launch attacks in their home countries and may now review their own security.

“Today the French Republic as a whole was the target,” President
Francois Hollande said in a prime-time evening address, declaring a national day of mourning on Thursday.

President Barack Obama described the attack as cowardly and evil, while German Chancellor Angela Merkel was among European leaders condemning the shooting.

The dead included co-founder Jean “Cabu” Cabut and editor-in-chief Stephane “Charb” Charbonnier. A firebomb attack had already gutted the old headquarters of Charlie Hebdo in November 2011 after it put an image of the founder of Islam on its cover in what it described as a Sharia edition.

This article appeared in print on page 1 of the January 8th, 2015 edition of Hamodia.