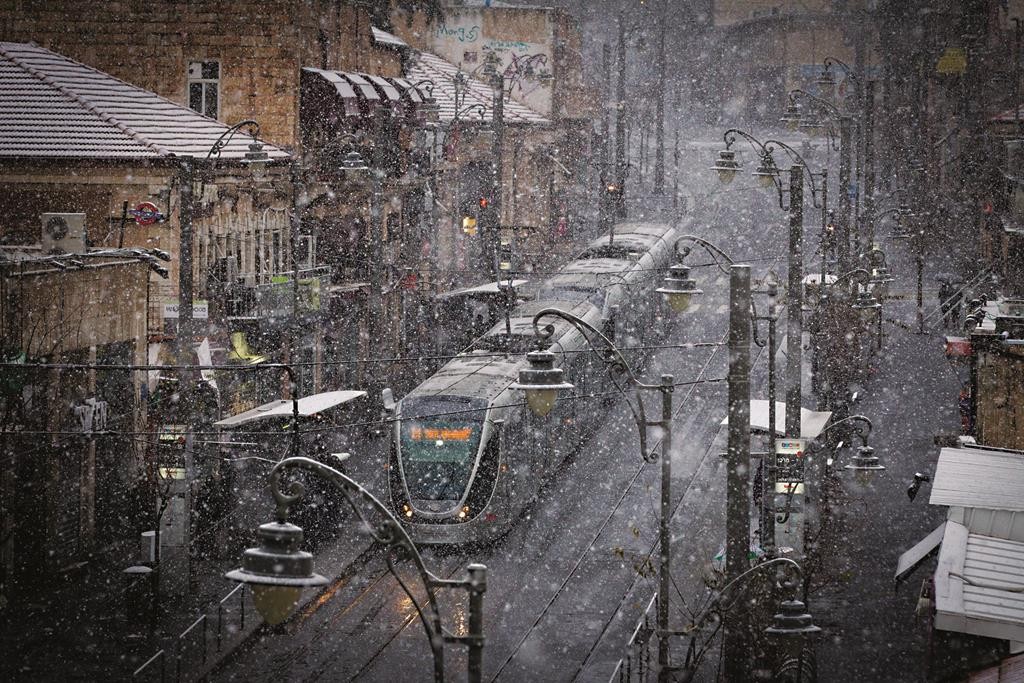 Snow, rain and hail fell throughout Israel on Wednesday, forcing road and school closings, leaving thousands of homes without electricity and slowing down operations at Ben Gurion Airport.

Although not the blizzard that had been feared, the rough winter weather was nevertheless sufficient to have justified the elaborate preparations made for it across the country. Nor was it over, as more precipitation was forecast for later in the week.

At Ben Gurion Airport, a lightning bolt struck the control tower about 2:30 p.m., damaging some of the supervisory systems, the Israel Airports Authority said.

B’chasdei Shamayim, no one was hurt and aircraft were not in danger. The tower continued to operate on subsystems, though the IAA said there might be delays of up to an hour because of it.

“At this time, technical staff members are servicing the affected systems,” a statement from the IAA said. “As stated, there is no danger or security problem in takeoffs or landings.”

Earlier in the day, a thick, white layer of hail on runways caused several cancellations and delays. However, most arrivals and departures were on schedule despite the storm.

At times during the day, Israeli police sealed off Routes 1 and 443 leading into Yerushalayim, reopening them as conditions permitted.

“We ask that citizens not take risks and heed the police’s safety instructions,” Police chief Yohanan Danino said. “In the last 24 hours, we have asked people not to come to Yerushalayim today and to avoid driving in the city. Now we are seeing fewer cars on Route 1 [connecting Tel Aviv to Yerushalayim].”

“Our goal is to avoid a situation in which people are stuck in the middle of the road without being able to enter the city or turn around,” the chief explained.

Yerushalayim wasn’t the only city to be isolated by the storm. All roads to Tzefas were closed as snow began to pile up in the north. Roads leading to the Golan Heights were also closed.

As of Wednesday evening, approximately 10,000 to 17,000 households in Israel had been hit with power outages due to the storm. The affected areas were concentrated in Netanya, Herzliya, Ashkelon and Rehovot, but also included Petah Tikvah, Afula, Yehud and certain streets in Yerushalayim and Tel Aviv, according to the Israel Electric Corporation.

In the rural areas of Yehudah and Shomron, strong winds brought down power lines. Residents reported loss of electricity in Itamar, Alon Moreh, Har Bracha, Kiryat Natafim and Yitzhar. The IEC said the average time for restoring power was about three to four hours.

In Holon, the roof of a shopping center partially collapsed, damaging some cars that had been parked in the center’s lot. Three people were treated in a local hospital for light injuries in that incident.

In Maale Adumim, the roof of a kindergarten fell in. Fortunately, classes had been cancelled and no one was injured.

School were closed in Yerushalayim and its environs, as were schools in the Shomron.

The Israel Nature and Parks Authority closed a number of parks due to the risks of flooding.