Too Cool For School in Some Parts of the Nation 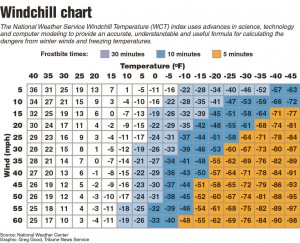 How cold is it across the U.S.? Too cool for school in many parts of the country. And so frigid in the Minnesota-St. Paul area that you could get frostbite in less time than it takes to buy car insurance.

At least the Northeast isn’t getting clobbered with snow the way it was this time last year.

A look at the blast of dangerously cold air that is dropping temperatures into the single digits and sending windchill readings below zero, even in the Deep South:

Watch Those Fingers and Toes!

With windchills plunging into the minus-30s to the minus-50s across Minnesota on Wednesday, Dr. Ryan Fey of the Hennepin County Medical Center in Minneapolis warned that serious frostbite injuries can happen in 10 minutes or less.

Wet gloves, socks or boots speed up the process. So do smoking and medical conditions that cause poor circulation, such as diabetes. And the thinner skin of elderly people and children makes them more vulnerable, he said.

You Have No Class

The arctic chill prompted school closings or delayed openings from Alabama to the Dakotas.

Many school systems decided to let it warm up a little before making children stand outside and wait for their buses. They also hoped to avoid overtaxing school heating systems and allow more time for buses to get running.

Wind-chill readings below zero were forecast in such places as Alabama and Asheville, North Carolina, along with a wide swath of the Midwest and the Plains.

In the Birmingham, Alabama, area, Jefferson County School Superintendent Craig Pouncey warned that the buses are vulnerable when the mercury falls to 20 or lower.

Hey, it Could Be Worse

Temperatures are expected to drop to zero or below in southern New England and to 7 above in New York City, with windchills getting into the minus-20s in some places. But little or no snow is forecast for most of the Northeast.

And to think: Around this time last year, parts of the region were digging out from 2 feet of snow accompanied by brutal polar air.

In fact, this season’s snowfall totals are way down from last year, one of the snowiest seasons on record.

This article appeared in print on page 4 of the January 8th, 2015 edition of Hamodia.