Business Many Recalled Vehicles Do Not Get Repaired, Posing a Safety Risk
Business 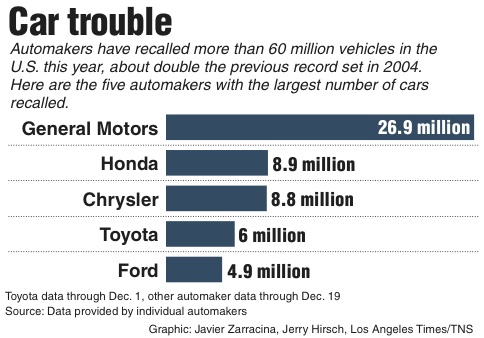 Each day, attorney Terry Harris sets out in his trusty 2002 Honda Civic, which has 150,000 miles — and has been recalled for a variety of defects considered dangerous by safety regulators.

Two are for air bags that can explode, sending shrapnel into the cabin. Another aims to fix a wiring problem that could make the headlights shut off suddenly.

“I think probability works in my favor. I don’t feel that it is urgent,” Harris said. “If I ever take the car into the dealership, I will get it fixed. But it is not at the top of my things-to-do list.”

Automakers recalled about 60 million vehicles in the U.S. in 2014, almost double the previous record set a decade ago.

But as many as 35 million of these vehicles have not been repaired, according to some estimates — even though many have defects that have been linked to multiple fatalities.

“Any vehicle that is unrepaired is a risk,” said David Friedman, the National Highway Traffic Safety Administration’s deputy administrator.

GM has repaired a little more than 60 percent of almost 2 million older cars equipped with a defective ignition switch linked to at least 42 deaths. But that leaves about 700,000 unrepaired cars on U.S. roads. At any minute, the ignition switch can shift off, causing the driver to lose control.

It’s not the only potentially deadly problem. About 14 million vehicles from Honda, Toyota, Nissan, BMW, Ford, Chrysler and other brands were recalled in 2014 because they have defective Takata air-bag inflators. In a crash, the air bags can fail to deploy correctly and will shoot metal fragments inside the car.

The problem is connected to at least five deaths, according to the Center for Auto Safety. Less than 10 percent have been fixed, said Clarence Ditlow, the center’s executive director.

Automakers have repaired only about 40 percent of all vehicles recalled in the U.S. in 2014, leaving more than 35 million vehicles with uncorrected defects, he said.

“There’s no doubt someone else is going to die,” Ditlow said.

The families of two women killed in separate crashes in 2014 — Lara Gass and Brittany Alfarone — suspect they died after defective switches caused them to lose control of their GM cars.

Both were driving recalled cars. The replacement part for Gass’s car wasn’t available when she crashed. Alfarone had attempted unsuccessfully to get a dealer to fix her car, according to the family.

“That’s even a bigger challenge for older vehicles,” Friedman said.

The GM cars with the bad switch, for example, are all from the 2003 through 2011 model years. None is still in production.

About 70 percent of recalled cars are repaired in the 18 months after the program is announced, according to Friedman. The NHTSA doesn’t track repair rates over a longer period.

Late-model cars have the highest repair rates because people tend to take them to dealers for service. Most dealers run a check of the vehicle’s identification number to see if there is a recall, then make the repairs. Automakers reimburse dealers for their work.

Some vehicles don’t get fixed because people decide their car is running well and they don’t want to take the time, Friedman said. Others never learn of the recall.

“How do you target people who don’t have English as their primary language, who are not on (social media)?” Friedman asked. “We have to start thinking about marketing recalls in the same way automakers sell new cars.”

That’s what GM is trying to do. The automaker is dealing with one of the biggest recall scandals in automotive history — and being investigated by the Department of Justice, Congress and NHTSA for not recalling the cars with the ignition-switch problem much earlier.

Judging from the $1.2 billion federal fine Toyota paid out in 2014 — after admitting that it had misled regulators and consumers about recalls — GM is likely to pay a similarly high penalty. Already, it has set up a compensation fund expected to pay hundreds of millions of dollars to those injured in crashes or to survivors of those killed.

“We have used every possible communications channel to try to motivate people to bring their vehicles in,” said Ryndee Carney, a GM spokeswoman.

First there were traditional methods: direct mail, telephone calls and asking dealers to reach out to their customers. There’s also been pervasive news coverage, including congressional hearings and NHTSA announcements.

“Over 99 percent of the people in the U.S. were aware of the recall, but we still did not have as many people as we wanted coming in to get their cars fixed,” Carney said.

GM handed the problem to its marketing team, which researched why owners weren’t responding. Many were the third, fourth or even fifth owner of the car; any dealer link to dealer service was broken several owners ago.

Many owners also didn’t know they could get a loaner car during the repairs and weren’t willing to give up their vehicle for a day. Older owners were confused by the recall process. There might not have been replacement parts available when they contacted a dealer, and they didn’t know they could try again, Carney said.

GM set up a call center with 72 agents to contact owners of unrepaired cars, who turned out to be concentrated in Los Angeles, Houston, Dallas, Chicago and New York. Because the communities with a high percentage of unrepaired vehicles have a large number of Spanish speakers, GM brought in bilingual agents.

The automaker tried to lure younger owners by offering $25 gift cards to seven national retailers if they would get their cars fixed. That program continues through January. Tens of thousands of people have taken advantage of it, Carney said.

In Dallas, GM offered tickets to the Texas State Fair and courtesy transportation back and forth from dealer repair shops. That brought in more than 700 vehicles. It tried the same in Los Angeles, with free tickets to the LA Auto Show, but fewer than 200 people responded.

The automaker also tapped “big data” to reach people. It shared owner names and car-registration data for unrepaired vehicles with Tustin, Calif., data marketing firm Acxiom. Acxiom then used the information to post messages on how to get the car repaired on the individual’s social-media page or while they were playing online games with friends, Carney said.

These efforts helped GM get 60 percent of the cars repaired in about nine months, one of the best rates among large recalls in such a time period, Friedman said.

Other strategies could get cars repaired more quickly, Ditlow said.

State departments of motor vehicles should have a digital tie-in to the NHTSA’s federal database, notifying state officials if a car being registered has an outstanding recall repair, Ditlow said. They then could force the owner to repair the car being registered, he said.

Additionally, insurance companies might look up a vehicle’s recall history when someone purchases or renews coverage, then ask owners to make repairs, Ditlow said. Requiring used-car dealers to make sure any recall work is completed before selling a vehicle would also take defective cars off the road, he said.