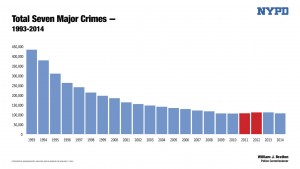 It was “disrespectful” for some New York Police Department officers to turn their backs to him during a pair of funerals for slain police officers, Mayor Bill de Blasio said Monday at a news conference with his police commissioner.

The act of protest were hurtful to the families of the two cops killed in an ambush last month, de Blasio said in his first public remarks on the officers’ protests. He also argued that the public rebuke was an offense to the city at large.

Patrick Lynch, head of the city’s rank-and-file police union, said after the deaths of Officers Rafael Ramos and Wenjin Liu that de Blasio had “blood on his hands.” Thousands of officers turned their backs on de Blasio when he delivered eulogies at Ramos’s funeral last month and again Sunday at Liu’s funeral.

Police Commissioner William Bratton, who has steadfastly supported the mayor during the widening rift with the rank-and-file, also condemned the action, saying the officers involved “embarrassed themselves.”

He called the protests a selfish act that dominated the news coverage and diverted attention from the two slain officers.

At the news conference, held at police headquarters in Manhattan, the mayor announced that 2014 saw the fewest murders in recorded city history, and had the lowest violent crime rates in the past 10 years.

This article appeared in print on page 4 of the January 6th, 2015 edition of Hamodia.