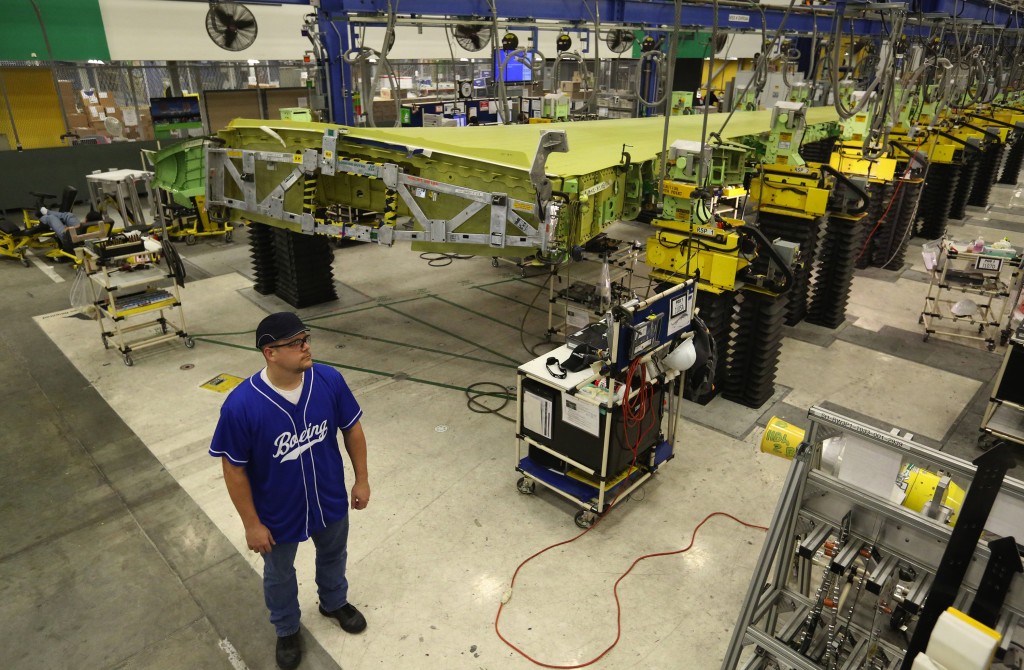 As a record production year wound down at Boeing, executives shrugged off analysts’ worries about a possible downturn and expressed full confidence in busy years ahead for Washington state’s aerospace industry.

With massive production hikes planned and a wave of worker retirements on the horizon, Pat Shanahan, Boeing vice president in charge of airplane programs, said the company expects to hire 20,000 to 30,000 people in Washington through the end of this decade.

At the same time, Boeing is making big investments in new automation equipment that promises to transform the nature of blue-collar production jobs for those future hires.

Inside the Renton, Wash., 737 jet assembly plant, where two assembly lines each pump out 21 airplanes every month, construction crews are installing the foundation for a third – the new 737 MAX line that will begin production in 2015.

On a tour in December, Shanahan predicted the Renton plant won’t miss a beat executing Boeing’s ambitious plan: “Going to 52 a month, introducing the MAX and changing our manufacturing process, all simultaneously.”

In the adjacent 737 wing facility, a shiny, new 25-foot-tall automated wing-panel fastening machine was being put through its paces to gain certification for initial operation in the spring.

Boeing is installing eight of these multimillion-dollar machines – designed and built by Electroimpact of Mukilteo – to make possible its plan for the astonishing Renton ramp-up to 52 jets per month, triple what it was a decade ago.

Meanwhile, in Everett, Wash., construction is well along on two buildings that will house production of the Boeing 777X wings and fuselage. There, too, new advanced automated systems will pump out ever more airplanes.

Barry Eccleston, President of Airbus Americas, said he sees no waning of the prolonged aviation boom.

“We’re not seeing any weakness in the order book or any slowdown in the ordering rate,” Eccleston said.

The way both prime manufacturers paint a glowing picture of the industry’s prospects was lampooned at an industry conference earlier this year by Adam Pilarski, a respected industry veteran and senior vice president with consulting firm Avitas.

Wall Street analysts have repeatedly warned that production rates for the Airbus A330 and for Boeing’s 777 may need to be cut back severely before the end of the decade if the plane builders can’t find customers for the last of their current models as major upgrades are readied.

Boeing executives brush aside such talk.

Vice president of marketing Randy Tinseth agreed that some legacy European flag carriers indeed find themselves “at a crossroads” because of competition from the Gulf carriers. But he said the company’s order book is so large and diverse – a backlog of more than 5,700 airplanes – that individual deferrals have minimal impact.

Such optimism is backed by Boeing’s stellar manufacturing and sales performance in 2014.

“This year, Boeing is probably going to outdeliver Airbus in single-aisle jets for the first time since 2002, and we’re going to smash them on widebodies,” Wojick said in December. “It’s not even close.”

Boeing eclipsed Airbus in the number of airplanes delivered in 2014.

Thanks to yet another all-time-high production year from local factories – and for the first time with significant added help from Boeing South Carolina – Boeing beat Airbus in deliveries of larger widebody jets by a wide margin.

At the end of November, the U.S. jet maker had delivered 89 more widebody jets than Airbus in 2014.

Still, Airbus can point to significant strategic progress in 2014.

In the smaller-airplane segment, its A320neo family of jets continues to outsell Boeing’s 737 MAX family.

Eccleston said the Airbus advantage there is primarily due to its largest model, the A321neo, outselling the largest Boeing model, the 737 MAX 9.

Many analysts see the A321neo as the superior plane in this specific matchup. It carries more passengers and has better takeoff performance.

Boeing’s Wojick insisted that the vast majority of sales will go to the respective medium-sized variants – the 737 MAX 8 and the A320neo – and said Boeing wouldn’t be planning to build 52 jets a month if not totally confident in the MAX.

“This race has a long way to go,” said Wojick.