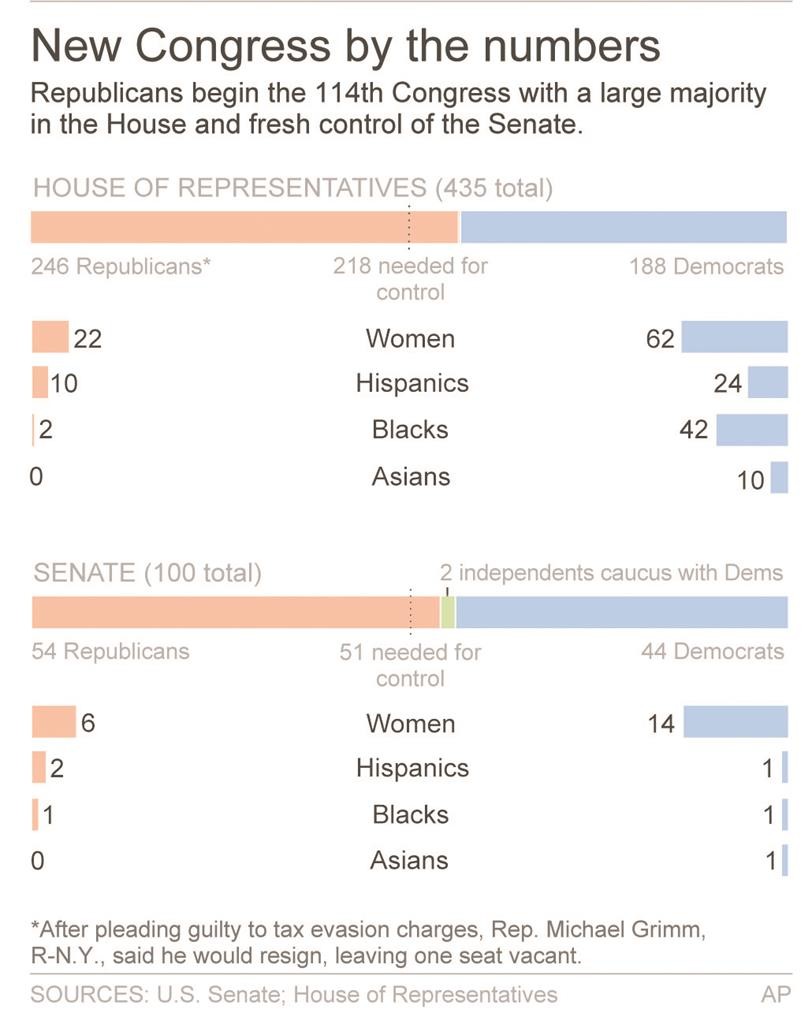 Congress’ approval rating hovers around 15 percent, but there’s one group of people excited about the institution: the newly elected lawmakers who are about to join its ranks.

The House will welcome 58 freshmen this coming week, including 43 Republicans and 15 Democrats, pushing the GOP majority to 246 members, the most since the Great Depression.

In the Senate, 13 new lawmakers, all but one of them Republican, will be sworn in, flipping control of the chamber to the GOP with a 54-vote majority.

The incoming classes will bring new gender and racial diversity to Capitol Hill, with 104 women in the House and Senate and close to 100 black, Hispanic and Asian lawmakers. The newcomers include the youngest woman elected to Congress, 30-year-old Elise Stefanik of New York, and the first black Republican woman, Mia Love of Utah.

As the new members prepared to arrive on Capitol Hill, several said they brought hopes of curbing the often partisan atmosphere in Washington, showing the public that they really can govern and, just maybe, getting Congress’ approval rating back up past 20 percent.

“This election was not an endorsement of either party, it was a condemnation of, yes, the president’s policies, but also of government dysfunction,” said GOP Rep.-elect Carlos Curbelo, who defeated a Democratic incumbent in Florida. “I hope we can be different. … I hope we focus on getting things done.”

Stefanik, a Republican, is one of several young new faces bringing fresh blood to Capitol Hill, where many lawmakers, especially senators, are in their 70s or even older. Others are Democrats Seth Moulton of Massachusetts, who is 36, and Ruben Gallego of Arizona, who’s 35. The three all graduated from Harvard University and have friends in common, Gallego said.

Gallego said the three have already discussed areas of cooperation.

“We have talked actually a lot, and I can definitely see us working together,” Gallego said.