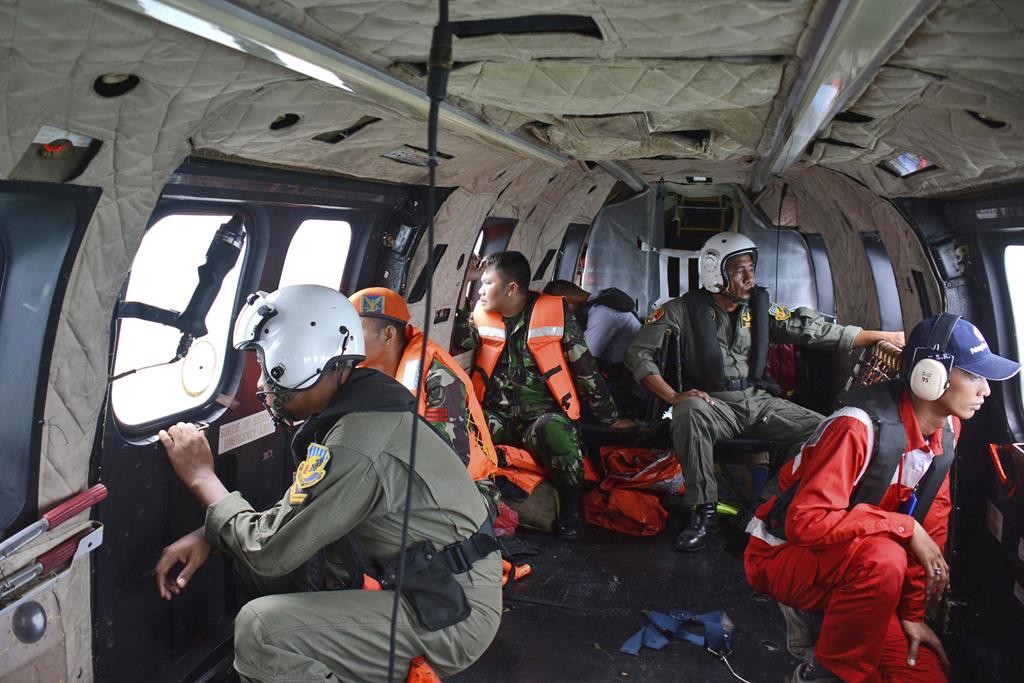 Heavy seas stopped divers from reaching the possible wreck of an AirAsia Indonesia jet off Borneo on Thursday and an aviation official said it could be a week before the black box flight recorders are found.

Nine bodies have so far been recovered from the Airbus A320-200, which crashed on Sunday en route to Singapore from the Indonesian city of Surabaya with 162 people on board.

The bodies were brought in numbered coffins to Surabaya where relatives have gathered for identification. AirAsia Indonesia’s CEO Sunu Widyatmoko was seen weeping when authorities handed over the body of the first victim, Hayati Luthfiah Hamid, to family members at a Surabaya hospital.

A search and rescue pilot has spotted a large shadow in the sea, which rescuers believe may be the wreckage, but they have made clear the sighting is not yet confirmed.

“Until now, there hasn’t been a confirmed finding or sonar image of the plane body under water,” Soelistyo said.

Forty-seven divers are on standby to investigate.

“I am hoping that the latest information is correct and aircraft has been found,” airline boss Tony Fernandes said on Thursday. “Please all hope together. This is so important.”

Toos Sanitiyoso, an air safety investigator with the National Committee for Transportation Safety, said it could take a week to find the black box. Committee head Tatang Kurniadi said the focus of the search, once the waters had calmed as expected in five days, was around the shadow.

“We are backtracking from where the wreckage was found to where the plane had its last reading and that is the focus of our search,” Kurniadi said. “The depth around here is 50 meters. No specialist equipment [is required]. Divers can go get it.”

Investigators are working on a theory that the plane stalled as it climbed steeply to avoid a storm about 40 minutes into the flight.

The plane was traveling at 32,000 feet and had asked to fly at 38,000 feet to avoid bad weather. When air traffic controllers granted permission for a rise to 34,000 feet a few minutes later, they received no response.

A source close to the investigation said radar data appeared to show that the aircraft made an “unbelievably” steep climb before it crashed.

“It appears to be beyond the performance envelope of the aircraft,” he said, noting that more information was needed to come to a firm conclusion.

Online discussion among pilots has centered on unconfirmed secondary radar data from Malaysia that suggested the aircraft was climbing at a speed of 353 knots, about 100 knots too slow, and that it might have stalled.