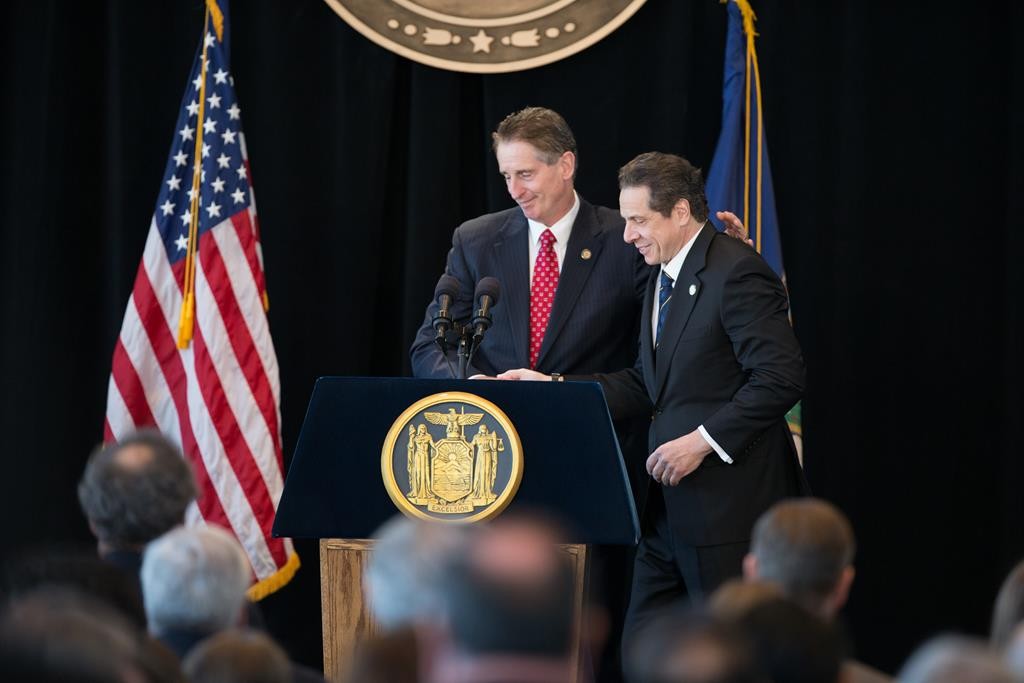 As we went to press, we learned that Mario Cuomo, who served three terms as governor of New York, died Thursday. He passed away six hours after Andrew Cuomo, his son, was formally sworn in for a second term.

In Governor Andrew Cuomo’s inauguration speech, he urged New Yorkers to lead by example through some of the nation’s worst times.

“It’s time to be bold, my friends, because there are no small solutions to big problems,” said Cuomo, a Democrat, in his inaugural speech.

Speaking from the symbolic heights of the newly completed One World Trade Center, Cuomo aimed high with his rhetoric, touching on national issues sure to trigger questions about his political ambitions while also hinting that he may firmly insert himself into the imbroglio that has roiled the nation’s largest city.

“We work harder and we earn less. Income inequality is at the highest point in over a century. While American capitalism never guaranteed success, it did guarantee opportunity,” Cuomo said. “For too many, the dream of economic of mobility has been replaced with a nightmare of economic stagnation.”

Cuomo said these frequently troubled times are “a uniquely New York moment because when things are at their worst, New York is at its best.”

The governor lurched to the left on issues such as the protests against police that have swept the nation since grand juries failed to indict police officers in the deaths of black men.

“The world saw an African-American man in Staten Island die and people are confused, disgruntled and angry,” Cuomo said. He argued that “today, sadly, too many people are questioning if the blindfold is still intact or does the justice system now see black and white or black and blue or rich and poor.”

The resulting protests have driven a wedge between Mayor Bill de Blasio and New York City police unions, which have claimed that the mayor has helped create an anti-NYPD atmosphere that led to the fatal shooting of two police officers on Dec. 20.

“Law enforcement officials have been wrongfully targeted and even assassinated. It must stop,” Cuomo said, before calling the two sides to work harder to find common ground. “Everyone is talking but no one is listening.”

De Blasio, whose relationship with Cuomo has at times been rocky, and the head of the largest police union were both in attendance at the inauguration but did not speak.

The Democratic governor — who has been mentioned as a possible 2016 presidential candidate — took the oath of office in a private ceremony at the governor’s mansion on Wednesday afternoon, alongside incoming Lt. Gov. Kathy Hochul.

The 57-year-old Cuomo, who defeated Republican Rob Astorino 54 percent to 40 percent to secure his second term, later traveled to Buffalo — Hochul’s home — to make another inaugural speech in the late afternoon.

During his half-hour speech in Manhattan, Cuomo said he wanted to focus his second term on continued efforts to revitalize upstate New York, overhaul public education and make government fairer and more effective.

He said the state had made great strides in advancing a liberal agenda since he took office, but it needed to replicate reforms occurring in Buffalo throughout the upstate region and address chronic high poverty with higher wages so “you don’t have to choose between paying the rent and putting food on the table.”

Cuomo said he went through his speech with his father, who quipped that it was “good, especially for a second-termer.”