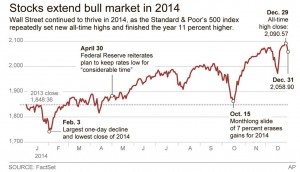 Even with the losses, the Standard & Poor’s 500 index finished the year up 11.4 percent, or 13.7 percent when dividends are included. It was the sixth straight year of gains for the stock market.

Oil, by contrast, had its worst annual performance since 2008, ending down 45 percent for 2014 after a sharp slump in the second half of the year.

The market’s annual gain exceeded even most optimistic forecasts made at the beginning of the year. Most strategists believe the stock market will also rise in 2015, but they expect more modest gains of between 4 percent and 6 percent.

There was no major catalyst for Wednesday’s selling. Trading has been slow all week because of the vacation break and most fund managers have closed their books for the year. However, some investors do reshuffle their portfolios in the last few days of the year for tax purposes.

Roughly 2.6 billion shares were traded on the New York Stock Exchange, compared with the 3.6 billion traded on an average day.

Energy stocks edged lower as the price of oil fell. Benchmark U.S. crude dropped 85 cents to $53.27 a barrel in New York. Oil has plunged by half since June amid abundant supplies and weak global demand.

Oil drillers fell the most Wednesday. Diamond Offshore was the biggest decliner in the S&P 500, declining 3.6 percent. The energy component of the S&P 500 is down 10 percent this year

U.S. markets will be closed Thursday for New Year’s Day and will reopen on a normal schedule on Friday.

Prices for U.S. government bonds rose. The yield on the 10-year Treasury note edged down to 2.17 percent. Bonds were an unexpected strong spot for the market in 2014. The 10-year note started 2014 at around 2.99 percent. Bond yields fall as prices rise.