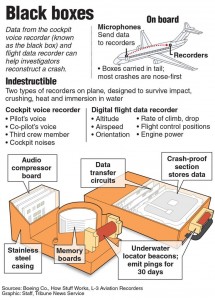 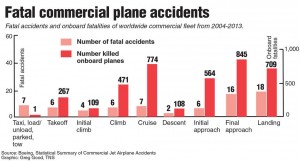 The first proof of the fate of AirAsia Flight 8501 emerged Tuesday from the shallow, aqua-colored waters of the Java Sea, confirming that the plane crashed with 162 people aboard in an area not far from where it dropped off radar screens.

Two days after the jet vanished, searchers found as many as six bodies and debris that included a life jacket, an emergency exit door and a suitcase about 10 miles from the plane’s last known coordinates.

The airliner’s disappearance halfway through a two-hour flight between Surabaya, Indonesia, and Singapore triggered an international hunt for the aircraft involving dozens of planes, ships and helicopters. It is still unclear what brought the plane down.

Images of the debris and a bloated body shown on Indonesian television sent a spasm of anguish through the room at the Surabaya airport where relatives awaited news.

The first sign of the jet turned up about 10 miles from its last known coordinates. Parts of the interior, including the oxygen tank, were brought to the nearest town, Pangkalan Bun. Another find included a bright blue plastic suitcase, completely unscratched.

“I know the plane has crashed, but I cannot believe my brother and his family are dead,” said Ifan Joko, who lost seven relatives, three of them children, on board the plane. “We still pray they are alive.”

The first body was later picked up by a navy ship. Officials said as many as six others followed, but they disagreed about the exact number.

Supriyadi was on the aircraft and saw what appeared to be more wreckage under the water, which was clear and a relatively shallow 20 to 30 meters (65 to 100 feet).

When media broadcast an image of a body floating in the water, many of the family members screamed and wailed uncontrollably. One middle-aged man collapsed and had to be carried out on a stretcher.

Their horror was captured by cameras on the other side of windows into the waiting room. Officials blacked out the glass later Tuesday evening.

Around 125 family members were planning to travel Wednesday to Pangkalan Bun to start identifying their loved ones. Body bags and coffins have been prepared at hospitals there. Dozens of elite military divers will join the massive search. They were desperate to search the water  ahead of approaching rough weather.

Nearly all the passengers and crew were Indonesians, who are frequent visitors to Singapore.

AirAsia group CEO Tony Fernandes, the airline’s founder and public face and a constant presence in Indonesia since the tragedy started unfolding, said he planned to travel to the recovery site on Wednesday.

“I have apologized profusely for what they are going through,” he said of his contact with relatives. “I am the leader of this company, and I have to take responsibility. That is why I’m here. I’m not running away from my obligations.”

The jet’s last communication indicated the pilots were worried about bad weather. They sought permission to climb above threatening clouds but were denied because of heavy air traffic. Four minutes later, the jet disappeared from the radar without issuing a distress signal.

The plane’s cockpit voice and flight data recorders, or black boxes, have yet to be recovered.

The United States said it was sending the USS Sampson destroyer, joining at least 30 ships, 15 aircraft and seven helicopters in the search for the jet.

This article appeared in print on page 4 of the December 31st, 2014 edition of Hamodia.