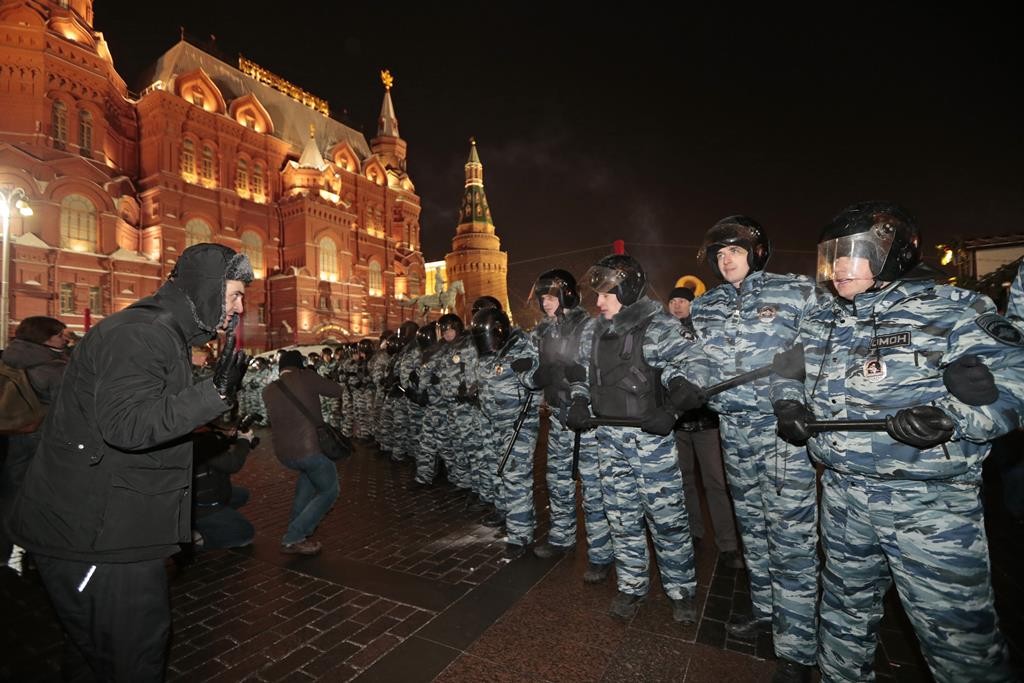 President Vladimir Putin’s chief political foe was convicted along with his brother on Tuesday in a fraud case widely seen as a political vendetta by the Kremlin, triggering one of Russia’s boldest anti-government demonstrations in years.

Police allowed a few thousand protesters to gather just outside Red Square for about two hours — a
show of relative restraint for Russian authorities, who have little tolerance for dissent — before moving in to break up the unsanctioned rally by pushing the demonstrators toward subway entrances.

The rally came hours after anti-corruption campaigner Alexei Navalny was found guilty of what activists said were trumped-up charges and given a suspended sentence of 3 1/2 years. His younger brother was sent to prison, a move that drew comparisons to the Stalin-era practice of punishing family members of enemies of the state.

The 38-year old Navalny, a lawyer and popular  online pundit, rose to prominence with his investigations of official corruption and played a leading role in organizing anti-Putin demonstrations in Moscow in 2011 and 2012 that drew hundreds of thousands.

Navalny, who has been under house arrest since February, violated its terms to attend the rally and was rounded up by police as he approached the site. He later posted online that .police drove him home and blocked him from leaving his apartment.

The protesters, who gathered on the Manezhnaya Square outside the Kremlin, chanted: “We are the power!” and “Russia without Putin!” Some shouted slogans of support for Ukraine, which saw its Crimean Peninsula annexed by Russia in March and has faced a pro-Russia insurgency in the east.

The Russian authorities usually move quickly to break up opposition protests, and the unusual delay this time may reflect Kremlin concerns about fueling public anger amid the country’s economic woes.

The ruble has lost about half its value this year, and the economy is heading into recession under the combined weight of Western sanctions and slumping oil prices.

Police said they detained about 100 protesters, while activists claimed up to 250 were rounded up. Russian law requires demonstrators to get official clearance for rallies. Violators can face prison sentences and heavy fines.