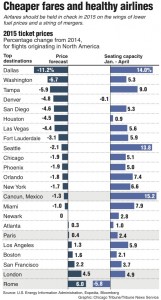 The airline industry in 2015 is likely to be healthy again because of mergers and falling jet-fuel prices, and while consumers might be stuffed into slimmer seats in coach, at least they will be able to enjoy new and upgraded planes and more onboard amenities, such as wi-fi and streaming video.

“2015 is poised to be one of the best, if not the best, years for the U.S. airline business,” said Henry Harteveldt, a travel-industry analyst with Atmosphere Research Group. “It’s not an entirely positive picture, of course. Uncertain economic climates in parts of Europe and Asia could affect U.S. airlines’ international profitability. But overall, 2015 should be a year that makes airline CFOs happy.”

Here’s what to expect in 2015 for fliers and for the airline industry:

Fares: Globally, airfares are expected to fall 5.1 percent, according to the International Air Transport Association, although many experts do not predict that kind of price drop in the U.S.

Why aren’t fares falling faster in the U.S. given airline profitability and fuel prices that have plummeted in recent months to the lowest levels in more than four years?

U.S. Sen. Charles E. Schumer, D-N.Y., has called for a federal investigation into what he describes as “extremely high” fares, citing a 10 percent increase during the past five years. He suggests that airline mergers and reduced competition might be inflating fares.

But Airlines for America, the U.S. airline industry group, is fond of pointing out that fares have been growing far slower than inflation for more than a decade. Besides, the group argues, since when is making a profit from lower costs a bad thing?

“When the price of coffee beans falls, no one asks Starbucks why his or her latte does not cost less,” the airlines group said in a recent statement.

Onboard amenities: Airlines are putting some profits back into their businesses. John Heimlich, chief economist for Airlines for America, said airlines are upgrading their airplanes and the airports they use at the highest spending rate in 13 years.

Onboard wireless internet access is not new, but it also will become nearly ubiquitous in 2015, even on regional jets that fly passengers to network hubs.

Delta was an early adopter of wi-fi for all planes, but others are catching up. American said this month that it will equip 250 of its regional jets with onboard wireless internet access. Weeks earlier, United announced that it would put wi-fi on more than 200 of its larger United Express regional jets by next summer.

United, American and Southwest Airlines will be big providers of streaming video in 2015.

Providing streaming video is a move away from video entertainment on seat-back screens, instead allowing passengers to stream videos, often free, to their iPads and laptops.

Airlines also are adding power outlets to seats, even in coach, to keep those devices charged.

The entertainment upgrades could help distract economy-class fliers from their cramped quarters. Leg and elbow space in airplane seats is shrinking as airlines try to make more money by cramming more seats in the back while selling upgrades for extra legroom.

Airlines are trying to mitigate the pain of economy class by installing slimmer seats, which fliers have reported can be uncomfortable. But even that will change for the better in 2015, Gwosdof said. “We’re seeing certain slim-line seats having the same level of comfort as the traditional ones did,” he said. “It’s not now universally a bad thing.”

Overall in 2015, look for better availability — for a cost, of course — of the “business-traveler trifecta.” That’s a flight offering wi-fi, in-seat power and seat pitch (essentially legroom) of 32 inches or more. “When you put them all together, it really creates a climate where a business traveler can get things done on the plane,” Gwosdof said.

Airline shuffling: American Airlines is likely to undergo the most change in 2015, as it integrates with US Airways.

The carrier announced this month that it will spend more than $2 billion on customer-related improvements. In 2014, the airline took delivery of 100 planes, and it expects 112 more next year, giving it claim to having the youngest fleet among U.S. network carriers.

Behind the scenes, American will seek FAA approval of a single operating certificate, allowing American and US Airways to operate as a single entity, although ongoing labor-contract negotiations will affect its ability to realize full benefits of that.

Just as important, American will combine its reservations systems, the backbone of an airline.

That move has been perilous for other airlines, notably United in 2012 when the combined system experienced glitches. Compounded by poor employee training, the switch-over resulted in months of widespread delays and cancellations, and led to defections by business customers.

At United, perhaps the biggest development most consumers will notice in 2015 is a revamped website, although the airline has not set a date for launch.

United will take delivery of new planes, finish installing wi-fi on its mainline fleet and introduce new food and beverage menus, which it promises will be a significant upgrade.

Expect Southwest Airlines, which carries more total passengers from Chicago than any other airline, to continue improving its lousy on-time rate, which has been especially poor at Midway Airport, where it has the most departures in the country. Its on-time rates improved after the airline built more time into its schedule between planes arriving and departing.

Delta Air Lines said that as of March 1 it will have five classes of seats, including a bare-bones selection to compete with low-cost carriers.

Frequent fliers: In 2015, United and Delta will add spending requirements for elite status — those gold and platinum members who get free seat upgrades, free checked bags and early boarding, among other benefits. Delta’s shift to the revenue-based system takes place Thursday; United’s on March 1.

The changes are meant to reward big-spending corporate travelers, an airline’s most profitable customers. American resisted a similar move next year as it combines frequent-flier programs with US Airways. However, American said this month it will award bonus frequent-flier miles to customers who buy the pricey seats in the first-class and business-class cabins, beginning Thursday.

Not only will recent changes mean fewer top elite fliers vying for those upgrades, but airlines are aggressively selling seat upgrades at the time of booking or even when checking in. That shrinks the pool of first-class seats left to be awarded to elite-status travelers.

This article appeared in print in the December 30th, 2014 edition of Hamodia.