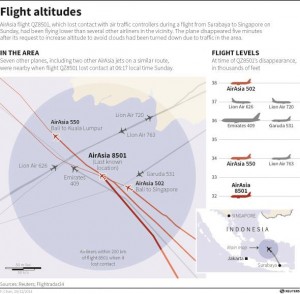 The plane sought permission to climb above threatening clouds. Air traffic control couldn’t say yes immediately — there was no room. Six other airliners were crowding the airspace, forcing AirAsia Flight 8501 to remain at a lower altitude.

Minutes later, the jet carrying 162 people was gone from the radar without ever issuing a distress signal. The plane is believed to have crashed into Indonesia’s Java Sea, but broad aerial surveys on Monday turned up no firm evidence of the missing Airbus A320-200.

Searchers spotted two oily patches and floating objects in separate locations, but no one knew whether any of it was related to the plane that vanished Sunday halfway into what should have been a two-hour hop from Surabaya, Indonesia, to Singapore. Officials saw little reason to believe the flight met anything but a grim fate.

Based on the plane’s last known coordinates, the aircraft probably crashed into the water and “is at the bottom of the sea,” Indonesia search-and-rescue chief Henry Bambang Soelistyo said. Still, searchers planned to expand their efforts onto land on Tuesday.

The twin-engine, single-aisle plane was last seen on radar four minutes after the last communication.

When planning a route prior to takeoff, pilots try to avoid thunderstorms. But if one pops up during the trip, or crews encounter rough turbulence, they routinely ask to fly around it or move below or above the turbulence.

A storm alone isn’t going to bring down a modern plane designed to withstand severe weather. But weather paired with a pilot error or a mechanical failure could be disastrous.

Pilots rely on sophisticated weather-radar systems that include a dashboard display of storms and clouds, as well as reports from other crews, to steer around dangerous weather.

At least 15 ships, seven aircraft and four helicopters were looking for the jet, Indonesian search-and-rescue spokesman Jusuf Latif said. Most of the craft were Indonesian,  but Singapore, Malaysia and Australia contributed to the effort. Aircraft from Thailand were awaiting clearance to join the search.

The State Department said Monday that Indonesia had asked for help locating the jet, and American officials were reviewing the request. The Pentagon said any assistance could include detection equipment deployed by air, surface and sub-surface.

An Associated Press photographer flew in a C-130 transport carrier with Indonesia’s Air Force for 10 hours Monday over a large section of the search area between Kalimantan and Belitung. The flight was bumpy and rainy at times. It flew low, at 1,500 feet, easily spotting waves, ships and fishermen, but there was no sign of the plane.

This article appeared in print on page 1 of the December 30th, 2014 edition of Hamodia.