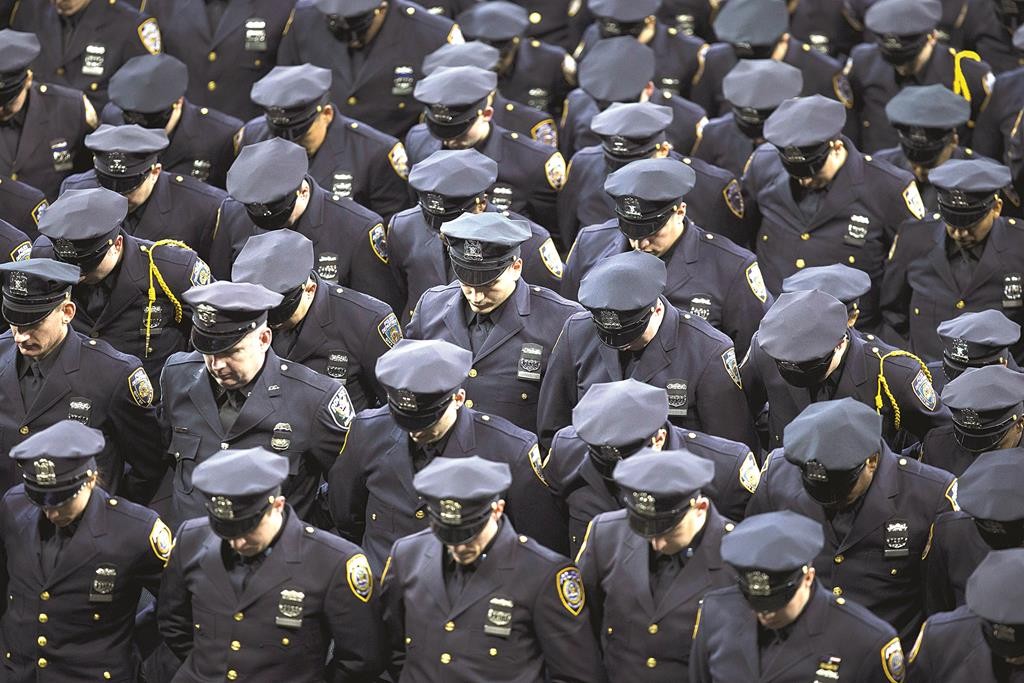 Mayor Bill de Blasio received some boos and heckles Monday at a police graduation ceremony, the latest chapter in his tension-filled relationship with the nation’s largest police force.

The rift between de Blasio and much of the rank and file has grown considerably in recent weeks, and the leaders of the police union have blamed the mayor for fostering an anti-NYPD atmosphere they believe contributed to the ambush slayings of two officers earlier this month.

Twice in a week — including at the funeral for one of the officers — officers turned their backs to de Blasio, adding an air of acrimony to the normally celebratory graduation ceremonies, which were held Monday morning at Madison Square Garden.

The 884 new officers sat stoically in their seats when de Blasio was introduced and many in the audience tepidly cheered. But boos could be heard from some in the crowd in the seats reserved for cadets’ family and friends.

About a dozen or so people in the stands stood with their backs turned to de Blasio, emulating the searing pose of disrespect that thousands of officers struck at Officer Rafael Ramos’ funeral on Saturday.

De Blasio, a Democrat elected last year on the promises of keeping crime low while reforming the NYPD, effusively praised the new officers.

But as he drew a breath to continue, a shout could be heard from the crowd: “You did!”

That heckle was met with laughter and some applause from the crowd and briefly flustered de Blasio, who had been speaking at a quicker-than-normal pace, seemingly to eliminate any pauses that could have been filled with boos.

But he continued praising the officers and received polite applause when he finished speaking, though the cheers were not as loud as the ones that followed for Police Commissioner William Bratton. The ceremony also included several tributes to the fallen officers, Ramos and Wenjian Liu.

He is far from the first mayor to be booed at a NYPD graduation: both Rudolph Giuliani and Michael Bloomberg, who were largely pro-cop, received some jeers during the midst of contract negotiations with the police unions. But de Blasio’s relations with the police are particularly perilous.

Earlier Monday, de Blasio oversaw a swearing-in ceremony for probationary firefighters. There were no overt signs of protest.