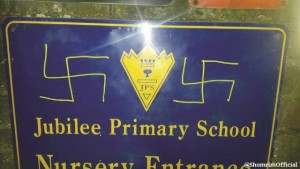 Residents of London’s Stamford Hill neighborhood awoke Monday morning to the site of over 20 cars daubed with swastikas.

“We will not tolerate anti-Semitism or racism of any kind, said Police Inspector Jeoff Bull.  “We are doing our utmost to trace and bring to justice the suspects involved in this racist graffiti as well as reassure all of our communities.”

Similar graffiti has appeared in the heavily Orthodox area several times recently. The Jubilee School, a non-Jewish elementary school in the same vicinity, was defaced with swastikas, bearing the same appearance twice in the last few weeks.

“We presume it’s the same person,” Chiam Hochhauser, Supervisor of Stamford Hill Shomrim told Hamodia. “We have no idea who it is and there is no video. He could be someone from the area and hopefully we’re going to catch him.”

Both local and national officials have been steadfast in their commitment to fight anti-Semitic and racist acts.

“We as a community are delighted with the rapid response and supportive nature of MPS Hackney [police] officers in support of the community and investigation of this crime, said community-police liaison, Moishe Friedlander. “Extra reassurance patrols will be forthcoming.”

This article appeared in print on page 2 of the December 30th, 2014 edition of Hamodia.