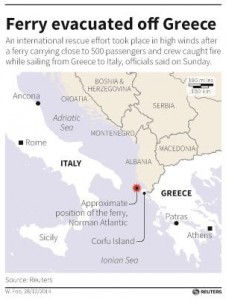 Italian and Greek military and coast guard rescue crews battled gale-force winds and massive waves Sunday as they struggled to rescue hundreds of people trapped on a burning ferry adrift between Italy and Albania. At least one person died and two were injured.

The Italian Navy said 190 of the 478 people on the ferry, sailing from the Greek port of Patras to Ancona in Italy, had been evacuated by late Sunday night. Most were airlifted by helicopter to other merchant vessels sailing nearby.

He said 10 merchant ships were in the area assisting rescue efforts, and that those who had already taken on dozens of passengers from the stricken ferry would remain in the area until the operation was over. The fire broke out before dawn Sunday on a car deck of the Italian-flagged Norman Atlantic, carrying 422 passengers and 56 crew members. Passengers huddled on the vessel’s upper decks, pelted by rain and hail, passengers told Greek media by phone.

Italy and Greece sent navy and coast guard vessels and helicopters to the extensive rescue operation, while nearby merchant ships lined up to form a barrier to protect the ferry from towering waves. As darkness fell, Italian Defense Minister Roberta Pinotti said rescue operations would continue through the night.

This article appeared in print on page 2 of the December 29th, 2014 edition of Hamodia.