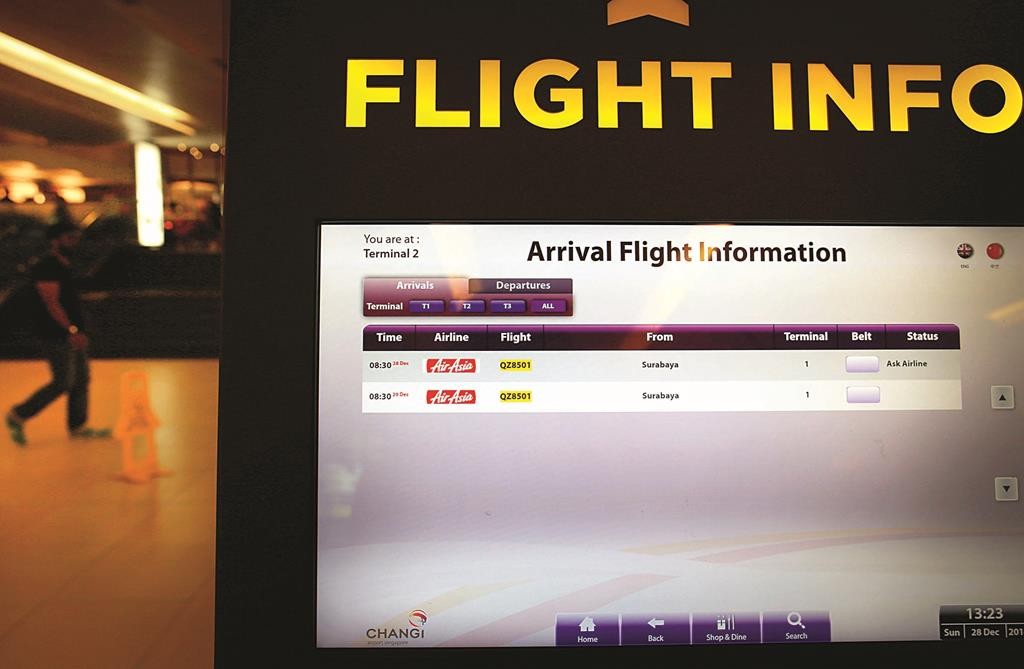 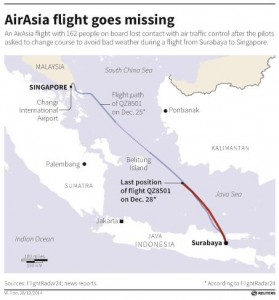 An astonishingly tragic year for air travel in Southeast Asia turned worse Sunday when an AirAsia plane carrying 162 people disappeared over stormy Indonesian waters, with no word on its fate despite several hours of searching by air and sea.

AirAsia Flight 8501 vanished in airspace thick with storm clouds on its way from Surabaya, Indonesia, to Singapore. Searchers had to fight against heavy rain.

At the Surabaya airport, passengers’ relatives pored over the plane’s manifest, crying and reacting emotionally. Nias Adityas, a housewife from Surabaya, was overcome with grief when she found the name of her husband, Nanang Priowidodo, on the list.

The 43-year-old tour agent had been taking a family of four on a trip to Singapore, Malaysia and Indonesia’s Lombok island, and had been happy to get the work.

Nearly all the passengers and crew are Indonesians, who are frequent visitors to Singapore, particularly for vacation periods .

The Airbus A320 took off Sunday morning from Indonesia’s second-largest city and was about halfway to Singapore when it vanished from radar. The jet had been airborne for about 42 minutes.

There was no distress signal from the twin-engine, single-aisle plane, said Djoko Murjatmodjo, Indonesia’s acting director general of transportation.

The last communication between the cockpit and air traffic control was at 6:13 a.m., when one of the pilots “asked to avoid clouds by turning left and going higher to 34,000 feet,” Murjatmodjo said. The jet was last seen on radar at 6:16 a.m. and was gone a minute later, he told reporters.

Indonesia, Singapore and Malaysia launched a search-and-rescue operation near Belitung island in the Java Sea, the area where the airliner lost contact with the ground.

AirAsia group CEO Tony Fernandes flew to Surabaya and told a news conference that the focus should be on the search and the families rather than the cause of the incident.

“We have no idea at the moment what went wrong,” said Fernandes, a Malaysian businessman who founded the low-cost carrier in 2001. “Let’s not speculate at the moment.”

Malaysia-based AirAsia has a good safety record and had never lost a plane before.

But Malaysia itself has already endured a catastrophic year, with 239 people still missing from Flight 370 and all 298 people aboard Flight 17 killed when it was shot down over rebel-held territory in Ukraine.

The plane had an Indonesian captain and a French co-pilot, five cabin crew members and 155 passengers, including 16 children and one infant, the airline said in a statement. Among the passengers were three South Koreans, a Malaysian, a British national and his 2-year-old Singaporean daughter. The rest were Indonesians.

AirAsia said the captain has a total of 6,100 flying hours, but Fernandes later said the number is more than 20,000. The first officer has 2,275 flying hours.

The A320 family of jets, which includes the A319 and A321, has a good safety record, with just 0.14 fatal accidents per million takeoffs, according to a safety study published by Boeing in August.

Flight 8501 disappeared while at its cruising altitude, which is usually the safest part of a trip. Just 10 percent of fatal crashes from 2004 to 2013 occurred while a plane was in that stage of flight, the safety report said.