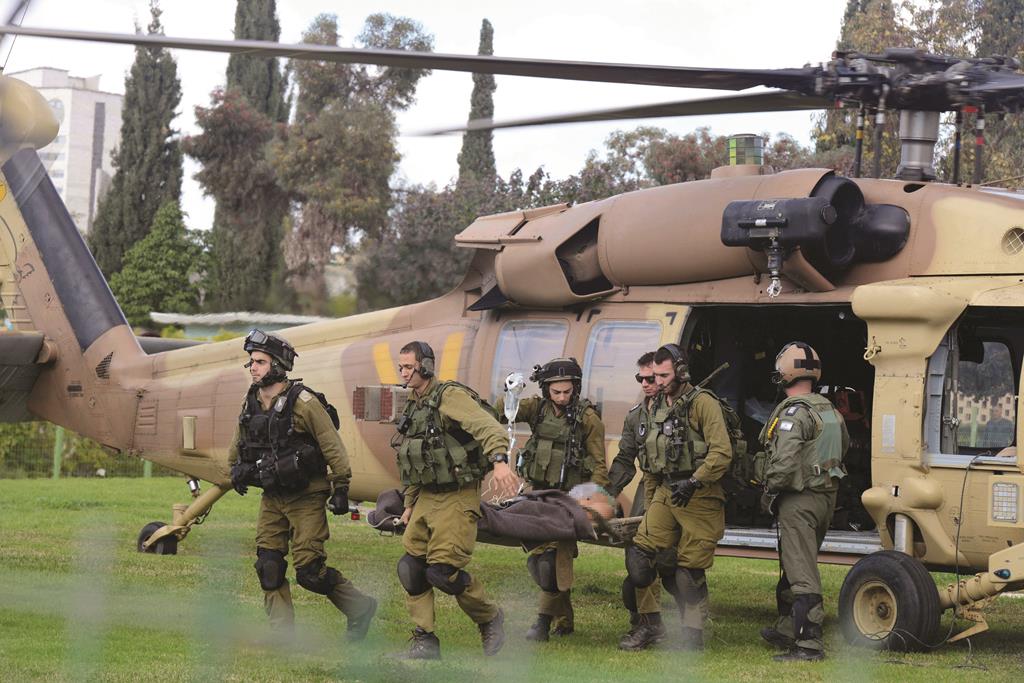 An IDF soldier was shot and seriously wounded by Palestinian terrorist sniper fire near the Gaza border on Wednesday morning.

He was part of a unit guarding work on the security barrier with Gaza near Kibbutz Nirim and Nir Oz when gunfire erupted from inside the Hamas enclave.

The wounded soldier underwent battlefield surgery that saved his life, and was then evacuated to Soroka Medical Center in Be’er Sheva and his family was notified. Doctors were consulting Wednesday night about the need for another operation.

“As a result of the attack, an IDF combat soldier from the Bedouin Reconnaissance Battalion suffered a severe chest injury,” an army statement confirmed.

Other soldiers in the unit immediately returned fire. According to Palestinian sources, a heavy exchange of fire ensued, including tank and air strikes by the IAF.

Tayseer al-Ismary, 33, head of the surveillance unit in Hamas’s “armed wing” Al-Qassam Brigades, was reported killed in the retaliatory action, and two other Gazans were wounded.

IDF spokesman Peter Lerner denounced the attack as “an outrageous act of aggression.”

“The IDF will continue to protect its forces and the border area,” Lerner added, and noted that the IDF had instructed Gazan farmers to stay away from the border area “for their own safety.”

Initial evidence pointed to Hamas as being behind the shooting, though the group denied responsibility for it. Hamas officials were reportedly angry at the Israeli reaction, arguing that they have kept their word on reigning in rogue terrorist groups in the territory.

Sources in the Israeli defense establishment noted that it would mark a departure from Hamas policy since the end of Operation Protective Edge, which has been to abide by the ceasefire and keep the lid on rogue terrorist factions, who have fired into Israel several times since then.

Meanwhile, there are continuing signs of a Hamas military buildup. Besides the recent test firing of missiles into coastal waters, Israelis living near the Gaza border have reported the construction of military infrastructure.

Rresidents of Netiv HaAsara have spotted dirt hills, fortifications, and ramps in northern Gaza only several hundred feet from their homes. Photographic evidence of the Hamas construction, complete with their green flag, was obtained.

“Hamas has been busy recently in gathering intelligence and in observation. We have noticed that the new lookout posts were manned at all hours of the day and even for parts of the night,” residents say.

IDF Chief Benny Gantz said on Wednesday: “I don’t see a war developing,” but as always the military will be on its guard for such a possibility.