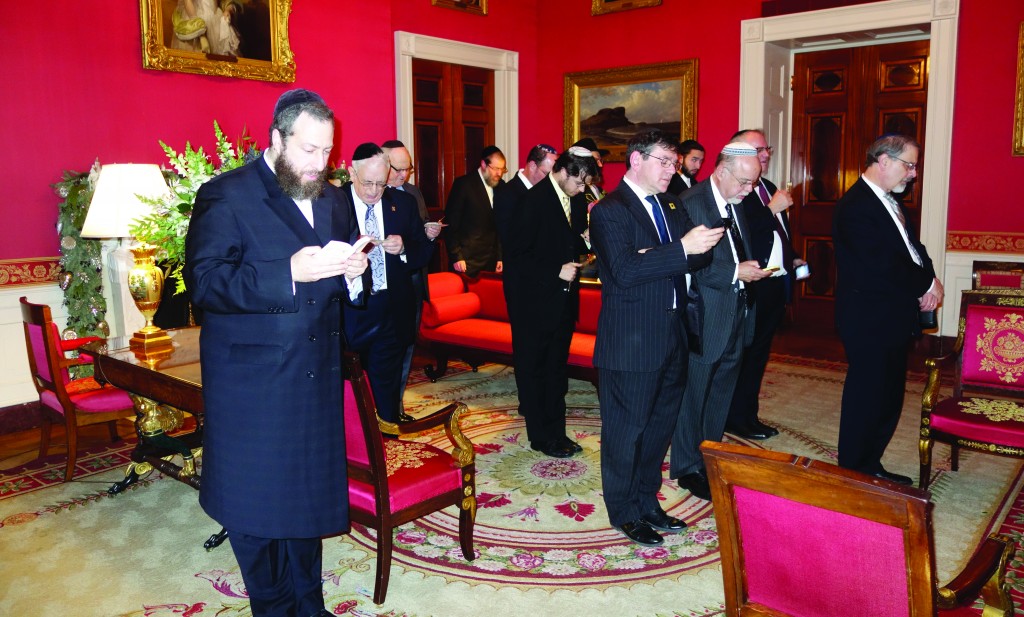 “You’re going to see the president?”

The words, spoken in a slow trill as if I had just discovered the cure, were uttered by a colleague of mine, no fan of Barack Obama but someone who grew up in the shadow of John F. Kennedy and Lyndon Johnson.

I wasn’t so keen about taking a day off — on Chanukah, at that — for a visit to Washington. But the way my friend reacted to news of my invitation convinced me otherwise.

Yes, I went to see the president, a man whose belief system and politics are contrary to everything I consider prudent. But he is the president, holder of the office which symbolizes America as much as the flag and the anthem do. And he lives in the White House, the most singular symbol of power the world will have.

The trip, my first ever to the White House, was an experience for the ages. Just walking in the footsteps of the founding fathers, standing in the famed Blue Room where John Adams received foreign diplomats, squatting at the fireplace where Franklin D. Roosevelt gave his legendary fireside chats, seeing the china used by Jefferson as he hosted who-knows-whom, was for the history buff in me a once-in-a-lifetime opportunity.

Riding the train to DC, I sat next to a husky fellow, whose demeanor, clothes and confidence bespoke wealth and influence. Indeed, his business card identified him as an investment researcher.

In between his tales of trips to the Far East, his brother’s close relationship with Henry Kissinger and his Jewish friend was a telling story of an African-American friend of his whom he once brought to the White House. The gentleman was overawed.

“My great-grandparents were slaves,” he said. “And to think that I’m now standing in the White House!”

It was that sentiment shared over and over again at Obama’s annual Chanukah party.

I stood near the president as he attempted to announce that he had just done the “mitzvah” of “pidyom shevuyim” with the release of Alan Gross from Cuban incarceration. But the heroes of Holocaust Hatzalah would have given years of their lives to get a former president’s ear and whisper into it the value of pidyon shevuyim in any language.

The reception was the stately one you would expect from the people’s mansion. Waiters milled around with glasses of beverages, offering to refill any glass that clinked close to empty. Scrumptious buffets of glatt kosher food abounded as the White House threw open its doors to its Jewish citizens. It was easy to forget that this was the iconic State Dining Room where this was taking place. Or that the foyer to enter it was the fabled East Room. Or that guests wanting to talk could retire to the celebrated Green Room, where a huge painting of John Adams stared down at the intruders.

Minchah in the Red Room, where at least one president was sworn into office? What’s next, a Daf Yomi shiur in the Oval Office?

The hundreds of years of history and layers of tradition I witnessed during my visit were truly mind-blowing. It once again emphasizes the medinah shel chessed that America has become since 1945.

The White House welcome for George Washington’s “Sons of Abraham” serves as a moment to ponder how far we have come since those bleak days when Europe’s Kingdom of Darkness threw its shadow across the Atlantic.

We will never know the answer to “what if?”

However, as Mrs. Ruth Lichtenstein, Hamodia’s publisher noted, some 400 Rabbis stood on those steps 70 years ago seeking to tell the president of the horrific murders going on in Europe — and were denied entry.

Mrs. Lichtenstein, who attended the White House reception, has spent many years bearing witness to the history of the Holocaust, including the U.S.’s failure to save Europe’s Jews, as head of Project Witness. To be given three hours of free rein in the East Wing, she says, is symbolic of how far we have come as a community.