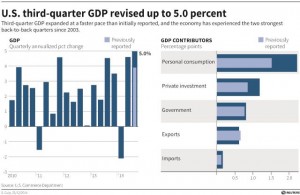 A surge in U.S. economic growth lifted stocks Tuesday to record highs and showed that the United States is putting distance between itself and struggling economies around the world.

Fueled by hiring gains, cheaper gas and rising confidence, consumers and businesses drove growth to a sizzling 5 percent annual rate last quarter. Though the economy is likely cooling a bit, its solid pace is brightening hopes for 2015.

The government’s third and final estimate of growth for the July-September period was the strongest for any quarter in 11 years. The result cheered investors. The Dow Jones industrial average ended the day up about 64 points to 18,024, the first time it’s surpassed 18,000.

In its report Tuesday, the government sharply upgraded third-quarter growth from its previous 3.9 percent estimate. Much of the increase came from consumer spending on health care and business spending on structures and software.

The economy has been benefiting from sinking energy prices, which have helped keep overall inflation ultra-low. Gas prices have fallen for 88 straight days, according to AAA, the longest consecutive decline on record. Cheaper gas has acted like a tax cut to free up money for Americans to spend on other items, including cars, clothes and appliances.

Last quarter’s growth was the fastest since summer 2003, and it followed a 4.6 percent annual rate in the April-June quarter. The government separately reported Tuesday that in November, consumer spending rose the most in three months and income by the most in five months. Both figures brightened hopes for the 2015 economy.

“After four years of rocky recovery the U.S. economy is now hitting its stride with a notable acceleration in growth,” said Gus Faucher, senior economist at PNC Financial Services Group. “Growth should remain good next year, with lower gasoline prices a big plus for consumers.”

Sal Guatieri, senior economist at BMO Capital Markets, said he now expects healthy consumer spending to fuel economic growth of 2.6 percent in the current October-December period. And Guatieri foresees solid growth of 3.1 percent next year. That would be the best performance since the economy grew 3.3 percent in 2005, two years before the Great Recession began.

Since the recession officially ended in June 2009, the economy has struggled to regain full health. Five years of growth have averaged an anemic 2.2 percent.

Tuesday’s figures are sure to be closely studied by the Fed. Last week, the Fed ended a policy meeting by saying it would be “patient” in deciding when to raise rates because the economy wasn’t yet fully healthy. Many investors concluded that no rate hike was likely before mid-2015 at the earliest, and they drove stocks to record highs.

Unexpectedly strong expansion, though, could escalate pressure on the Fed to raise rates, even though inflation remains well below its 2 percent target. One reason the Fed has kept its benchmark short-term rate near zero since 2008 has been to try to lift inflation from excessively low levels.

The government’s figures Tuesday showed that the inflation gauge the Fed most closely watches has risen just 1.2 percent over the past 12 months. Partly as a result, few analysts think Tuesday’s figures will prompt the Fed to raise rates in early 2015.

And when the Fed does begin raising rates, Handler and others think the increases will be gradual and have only a slight effect on growth.

Also on Tuesday, the University of Michigan said its index of consumer sentiment found that U.S. consumers were more optimistic about the economy than at any other point in the past eight years, buoyed by more jobs and falling gas prices.

Two other reports Tuesday were more cautionary: The government said sales of new homes fell in November, evidence that job gains have yet to boost the housing sector. And it said factory orders for long-lasting manufactured goods slumped last month.

Still, the overall U.S. economy is showing resurgent strength and separating itself from others around the world. Europe is struggling to grow. So is Brazil. Japan has slid into recession. China is straining to manage a slowdown. Russia envisions a recession next year.

Many economists think U.S. growth will continue to strengthen as more businesses grow confident enough to hire. The country is on track to have its healthiest year for job growth since 1999. In November, employers added 321,000 jobs, the sharpest one-month increase in three years.

With more people working and having money to spend, solid gains are expected in consumer spending, which accounts for about 70 percent of the economy.

For the third quarter, consumer spending grew at a 3.2 percent annual rate, the best showing this year and a full percentage point above the government’s estimate a month ago. The upward revision was driven by higher spending on health care.

Business investment spending rose at a 7.2 percent annual rate, 2.1 percentage points above the government’s previous estimate. Much of the new strength came from investment in structures and computer software.