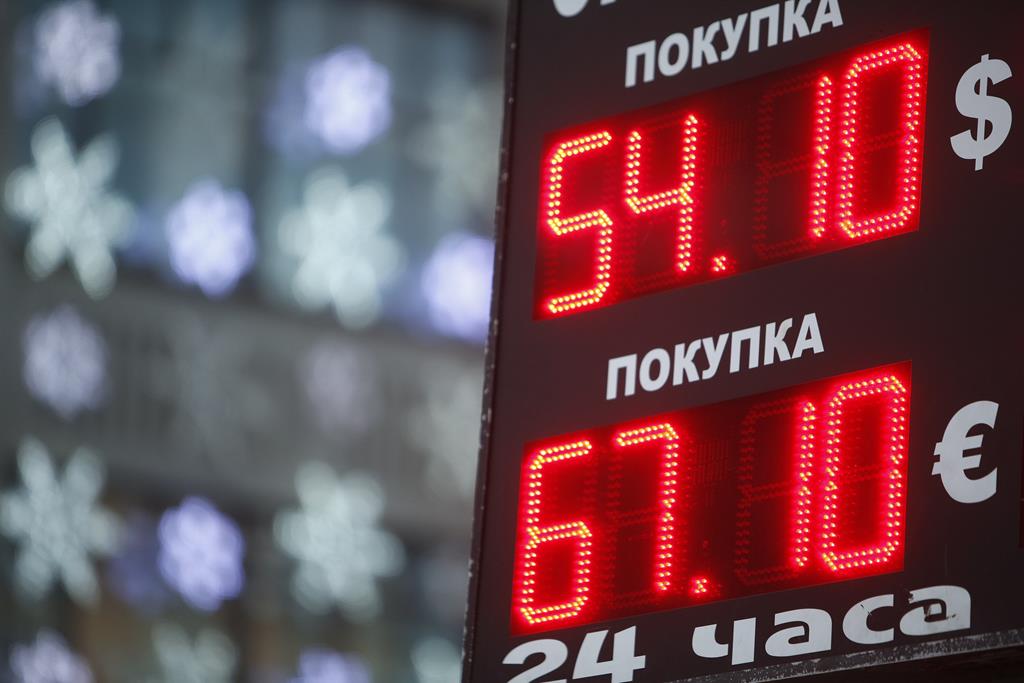 With its economy spiraling toward recession following Western sanctions and a dramatic fall in the price of oil, Russia took another step Tuesday to shore up the value of the ruble, which has been one of the world’s worst-performing currencies this year.

Russia’s energy-dependent economy has suffered a severe economic shock over the past few months, largely because oil prices have tanked — the benchmark New York rate has fallen by around a half since June to stand at not much more than $55 a barrel.

Because the Russian economy remains hugely reliant on energy revenues, that spells trouble. Credit rating agency Standard & Poor’s put the country on notice that it may face a downgrade following “a rapid deterioration of Russia’s monetary flexibility and the impact of the weakening economy on its financial system.”

S&P said it plans to make an announcement by mid-January. Any cut from the current BBB- would push Russia’s debt rating into so-called “junk” status.

Russia’s woes could also pose problems for the global economic recovery. It is one of the major uncertainties heading into 2015, particularly for the 18-country eurozone.

In a move Tuesday to contain the ruble crisis, the government instructed five of the country’s biggest state-controlled exporters to reduce their foreign currency assets to October levels and to not raise them again until March. The companies targeted were gas giant Gazprom, oil companies Rosneft and Zarubezhneft ,and diamond producers Alrosa and Kristall.

With Russia heavily dependent on imports, jittery consumers rushed to buy cars and emptied shelves at electronics and home appliances stores to pre-empt the price rises. Others besieged bank offices to withdraw their deposits and buy dollars or euros — the panic that raised the threat of a full-fledged banking crisis if it’s not contained quickly.

John J. Kirton, professor of political science at the University of Toronto, said the EU economies would face a drop in their exports to Russia and could also be hit by its banking crisis.

“I think there is a clear and present danger, today or tomorrow, because of a financial crisis that is already under way in Russia and that is affecting Europe in ways we don’t yet understand,” he said.

In response to the falling ruble, Russia’s central bank last week increased its key interest rate to a whopping 17 percent. Though that may help ease the selling pressure on the ruble by encouraging traders to hold onto the currency in anticipation of big returns, it is going to hobble Russian businesses and households if maintained at that level for too long.

Russian Prime Minister Dmitry Medvedev promised that the interest rate will be reduced once the ruble stabilizes, but acknowledged that the country faces the risk of a “deep recession.”

Medvedev said Russia’s current economic difficulties were exacerbated by Western sanctions, pointing that “a number of countries are effectively hampering the development of our economy.”

“There are hopes to turn Russia into a pariah and reduce it to lower ranks in the ratings,” Medvedev said. “This will never happen.”

The U.S. and the European Union have slapped a series of sanctions on Russia over its annexation of Ukraine’s Crimean Peninsula and support for a pro-Russian insurgency in eastern Ukraine. The closure of Western capital markets for Russian companies and banks has been particularly painful, raising pressure on the ruble.