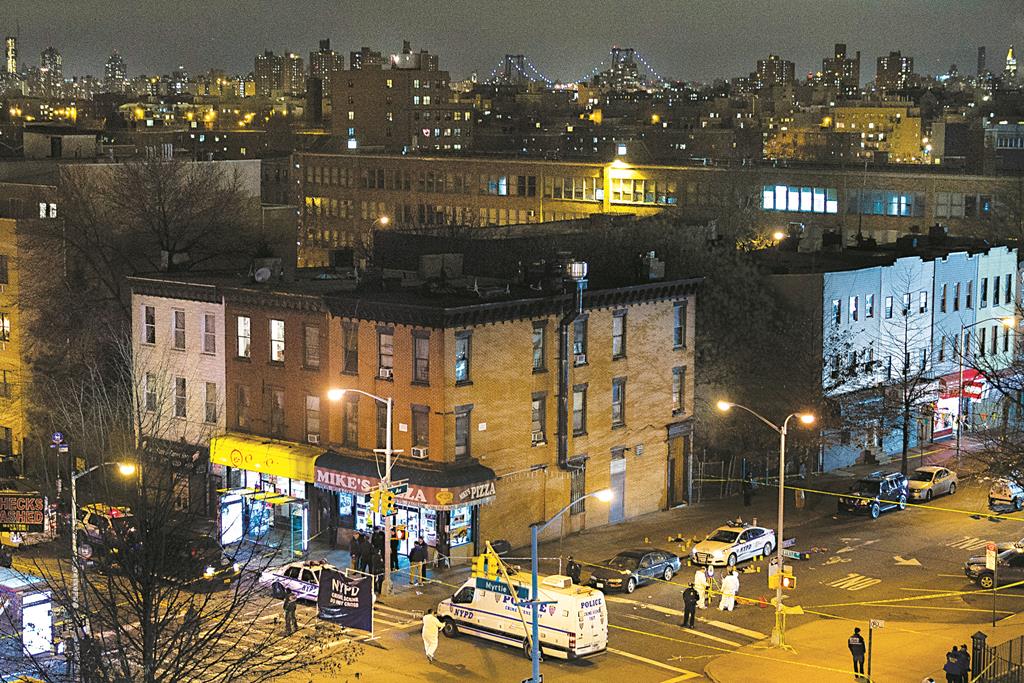 New York City leaders tried to tamp down the strong emotions coursing through their city on Monday after the shooting deaths of two police officers, calling for unity and urging protesters to refrain from anti-police demonstrations until the officers are laid to rest.

In an emotional speech at a sometimes heated news conference, Mayor Bill de Blasio declined to address the swirling controversy over whether his vocal efforts to reform the police department contributed to Saturday’s execution-style slaying of Officers Wenjian Liu and Rafael Ramos. He instead appealed for calm, visited the officers’ family members and urged residents to “put aside political debates and protests” for now.

Police Commissioner William Bratton met with the heads of the city’s police unions, including one who had accused de Blasio of having blood on his hands.

“They are standing down in respect for our fallen members until after the funerals,” said Bratton, who also acknowledged that the mayor has “lost the trust of some officers.”

It was unclear whether the efforts to promote peace will succeed. A coalition of protest groups released a statement blasting both Bratton and the police union, accusing them of trying to link the protests to the officers’ shootings as a way of silencing the demonstrations.

Calvin Butts, an influential New York City pastor, also objected to the call from both de Blasio and Bratton for protesters to stay home.

“To say we ought to stop protesting really does not touch on the fact that not only are the families of the police officers grieving, the family of Eric Garner is grieving,” Butts told CNN, referring to the Staten Island man who died during an arrest attempt. “The protests are a separate matter from this heinous crime that’s been committed against these New York City police officers.”

With the recent events, de Blasio is confronting his most serious crisis since he was inaugurated earlier this year on a promise to take the city in a new, more liberal direction — an effort that has attracted national attention. In a city accustomed to larger-than-life leaders, de Blasio now appears isolated and adrift, as even his allies acknowledged on Monday.

Liu and Ramos were shot Saturday as they sat in their patrol car in the Bedford-Stuyvesant neighborhood of Brooklyn, on the outskirts of Williamsburg. The shooter, 28-year-old Ismaaiyl Brinsley, led other officers on a chase after the shootings into a subway station, where he was found with a gunshot wound that appeared to be self-inflicted, police said.

After examining several thousand images on Brinsley’s cellphone and on his social media account, authorities said Monday that it was clear that he hated police and the government, citing, for example, a Nov. 25 posting. “He goes on quite extensively about America and its inequities,” said Robert Boyce, the NYPD chief of detectives, who described the post as a “tirade.”

Authorities had previously said that just three hours before Saturday’s shootings, Brinsley had declared his intention on his Instagram account to kill police officers as retribution for the killings of Garner and Michael Brown in Missouri. For the first time, police said the Brooklyn-born Brinsley had attended — and filmed on his cellphone — one of the recent anti-police protests in New York City.

Boyce cited other postings that talked about not only Brown but also Trayvon Martin, the 17-year-old African-American from Florida whose 2012 shooting death at the hands of a neighborhood watch volunteer also triggered widespread protests.

“We know that he was a very troubled young man,” Boyce said at an afternoon news conference. “He was enraged with police officers. That seemed to be the issue — anti-government, anti-police.”

Bratton also said Tuesday that  investigators are looking into how Brinsley had money despite not appearing to have a job or a home. He seems to have had cash — in $100 bills — though he lived on friends’ couches and doesn’t appear to have been employed.

Born in Brooklyn, Brinsley attended high school in New Jersey, with his mother telling officers that he was violent growing up and that she feared him.

Shortly before he shot the officers, Brinsley approached several witnesses on the street, asked them to follow him on Instagram and said, “Watch what I’m going to do,” police said.

Funeral services will be held for Ramos on Friday in New York City. Police are working with Liu’s family to bring other family members to the United States from China before setting a funeral date.

Both funerals will be major public tests for New York’s embattled mayor.

“It’s not that he doesn’t want to do a good job,” Catsimatidis said in a phone interview. “It’s that he doesn’t know how to handle it.” He urged the mayor to seek advice from Clinton.

But Hank Sheinkopf, a veteran Democratic strategist who worked for de Blasio rival Bill Thompson, said it is unlikely that Bill and Hillary Clinton — both of whom attended de Blasio’s inaugural in January — will rally publicly to his side.

De Blasio also risks being upstaged in the combative world of New York politics by Gov. Andrew Cuomo, a fellow Democrat who also visited Liu’s family Monday, notably before the mayor did.

“I’m going to make it my personal business today to bring the temperature down all across the board,” Cuomo said afterward. He appealed “for calm and peace and unity,” adding, “and then let’s have a productive conversation after the holidays.”

De Blasio revealed his emotions at a news conference Monday. After vowing not to be drawn into politics, he blasted the city’s media.