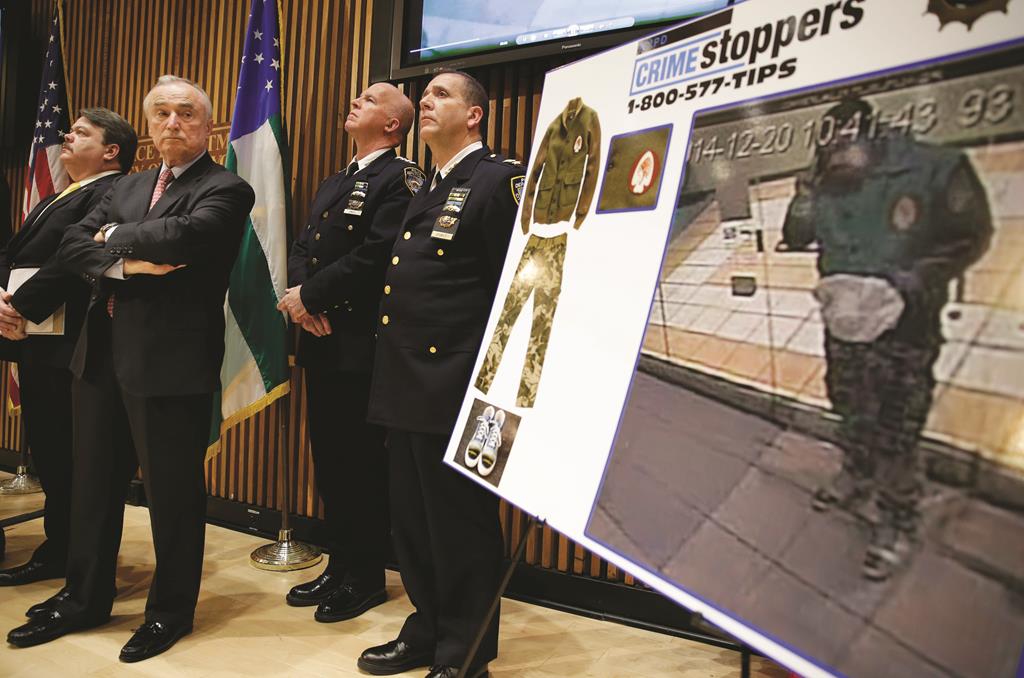 Standing outside a Brooklyn hospital after the bodies of two slain police officers were taken away, the head of the nation’s largest police union railed against Mayor Bill de Blasio for failing to support the rank-and-file, enabling protesters and creating a climate of mistrust that allowed the tragedy to happen.

“That blood on the hands starts at the steps of City Hall, in the office of the mayor,” Lynch said. “After the funerals, those responsible will be called on the carpet and held accountable.”

Such rhetoric isn’t new for the excitable, amped-up Lynch. But his ongoing war of words with the mayor in recent weeks is a notch up even for him.

Just days before Officers Wenjian Liu and Rafael Ramos were shot to death in their car, Lynch had suggested officers sign a petition barring the mayor from attending their funerals should they die on the job.

And after a grand jury’s decision not to indict a white police officer in the death of Eric Garner, Lynch was incensed when the mayor mentioned how he often fears for the safety of his biracial son in his interactions with police.

“Police officers,” Lynch said, “feel like they are being thrown under the bus.”

Lynch is the face — and the mouth — of the Patrolmen’s Benevolent Association, representing 24,000 officers. He’s stood at podiums across the city since 1999 to defend officers accused of brutality, abuse of authority and deaths in custody. He uses words like “mopes,” “mutts” and “skells” to describe those who attack police. He shakes the hand of every officer he sees. And right now, he says, the police are feeling terrible.

“It is an odd time, and it’s a very difficult time, because it seems like here in New York that the problems people believe society has are being laid at the feet of New York City police officers,” he said in an interview shortly before the shootings.

De Blasio, a Democrat serving his first term as mayor, said flatly Monday he thought Lynch’s recent comments were wrong and divisive and he did not believe all officers agreed with them. The mayor said he has a long record of support for the police and was trying to transcend the sniping and strike a unifying tone.

Lynch’s recent remarks have set off a hail of criticism online and in the streets, where people say he’s adding to the problem. But the way Lynch sees it, the all-time lows in crime in the city now give residents the luxury to criticize the police.

“People are forgetting how dangerous it was, the risks we took to make the city safe,” he said.

It wasn’t like that when he came on the job in 1984 as a patrolman in Williamsburg, then a wasteland of warehouses and crime but now among the trendiest parts of the city, with giant condominiums and expensive restaurants.

Lynch, 51, was born and raised in a traditional Irish-Catholic family in the Bayside neighborhood of Queens, the youngest of seven children. He is married with two sons, both police officers.

Lynch’s father was an MTA motorman, and he initially worked there before joining the NYPD. He became a union delegate and eventually ran for president. He is up for re-election for a fifth time next year. His mother died around the time of the Garner grand jury’s decision — he left a news conference to go to her wake.

His public battle with de Blasio, with volleys coming from both sides, is unprecedented, he says, because the mayor isn’t giving police support publicly or in continued contract negotiations. Other mayors may have criticized police or been stingy with salaries, he says, but not both at the same time. The city and police are currently in binding arbitration.

Before the shooting, NYPD Commissioner William Bratton said he knows and respects Lynch but accused him and other leaders of taking “cheap shots” at the mayor to advance their own agendas.

But Lynch said he’s speaking out for the rank-and-file, whose morale was low and has only plummeted.

“These ideas and issues aren’t created at PBA headquarters,” Lynch said. “They come from the ground up. The anger is palpable.”