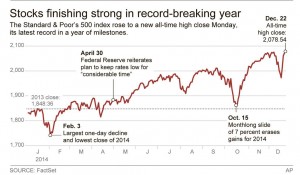 The Dow Jones industrial average and the Standard & Poor’s 500 index closed at record highs Monday as the market delivered its fourth gain in as many trading days.

Pharmaceutical and technology stocks were among the big risers, while shares in energy companies fell sharply as the decline in oil prices deepened. Discouraging data on U.S. home sales failed to derail the rally.

Trading volume was lighter than usual as many investors looked ahead to the Dec 25 holiday.

The Dow and S&P 500 are both up for the month, while the Nasdaq is down. The three indexes are up for the year.

Pharmaceutical stocks were among those making big moves Monday.

The price of U.S. oil fell on expectations of a further buildup in supplies both in the U.S. and from OPEC producers. Benchmark U.S. crude fell $1.26 to close at $55.26 a barrel in New York. Oil has plunged since peaking at $107 a barrel in June.

Natural gas fell 32 cents to close at $3.144 per 1,000 cubic feet. Natural gas has fallen 15 percent over the past three trading sessions to its lowest level since January 2013 on forecasts for milder winter weather.

Bond prices rose. The yield on the 10-year Treasury note fell to 2.16 percent.

This article appeared in print on page 8 of the December 23rd, 2014 edition of Hamodia.