Regional Shining a Light in the Darkness
Regional 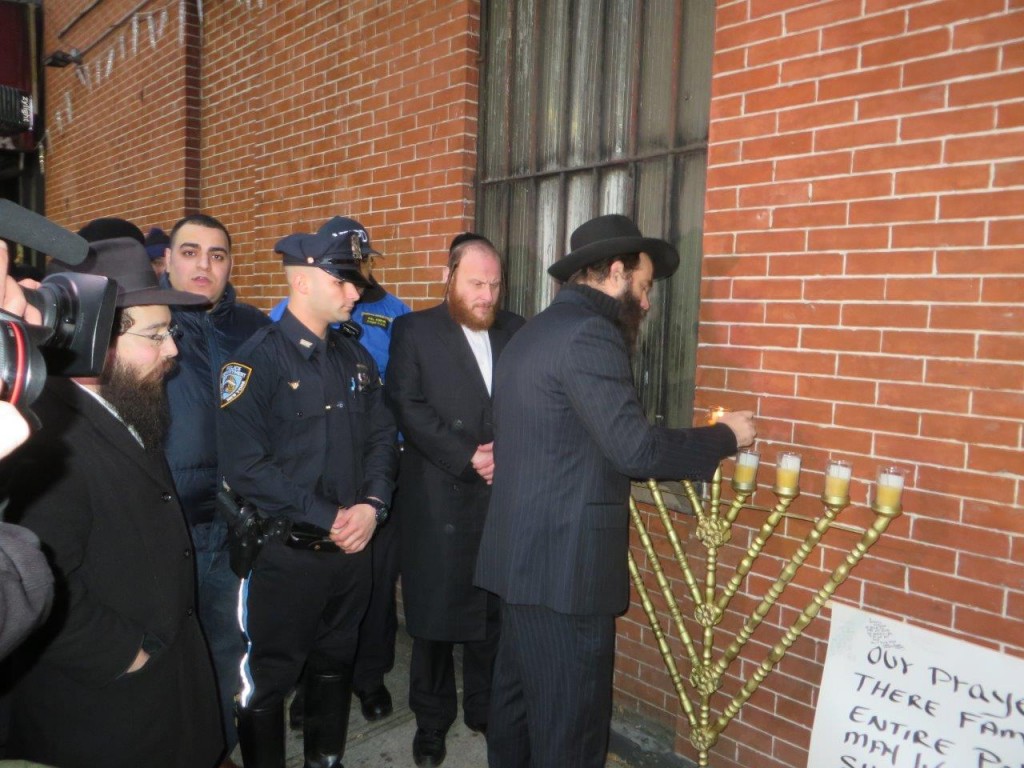 Mayor Bill de Blasio called Monday for a temporary halt to protests over police conduct as he faced a widening rift with a force preparing weekend burials for two of its own and decrying the demonstrations as a factor in the officers’ cold-blooded executions.

“I think it’s important that, regardless of people’s viewpoints, that everyone step back,” de Blasio said in a speech at the Police Athletic League. “I think it’s a time for everyone to put aside political debates, put aside protests, put aside all of the things that we will talk about in all due time.”

De Blasio’s relations with the city’s police unions have tumbled to an extraordinary new low — one not experienced by a mayor in the nation’s largest city since David Dinkins was mayor — in the aftermath of Saturday’s shooting in which the gunman claimed was retaliation for the deaths of black men at the hands of white cops. In a display of defiance, dozens of officers turned their backs to de Blasio at the hospital where the officers died.

De Blasio, in his first extensive remarks since the killings, said it was time to focus on the grieving families of Officers Wenjian Liu and Rafael Ramos. He and Police Chief William Bratton met with them earlier.

“There’s a lot of pain. It’s so hard to make sense of it — how one deeply troubled, violent individual could do this to these good families,” a somber de Blasio said. “And I think it’s a time for everyone to take stock that there are things that unite us, there are things that we hold dear as New Yorkers, as Americans.”

The police unions blame de Blasio for fostering an anti-police sentiment. Patrolmen’s Benevolent Association President Patrick Lynch declaring that there was “blood on the hands” on the “steps of City Hall and the office of the mayor.”

Sergeants Benevolent Associations head Edward Mullins refused to back down from that stance, saying in an interview Monday that “the mayor has turned his back on us — he got elected on his campaign of attacking the police all along.”

That link — strenuously denied by the de Blasio administration — was given some credence by Police Commissioner William Bratton on Monday. In an interview with NBC, Bratton said “what’s quite apparent, obvious, is that the target of these two police officers was a direct spinoff of this issue of these demonstrations.”

Even Bratton, who has steadfastly praised de Blasio, conceded that the mayor was on shaky footing with some in the NYPD. When asked if the mayor had lost the force’s trust and confidence, Bratton said, “I think he’s lost it with some officers.”

Meanwhile, a union-generated message at the 35,000-officer NYPD warned officers that they should respond to every radio call with two cars — “no matter what the opinion of the patrol supervisor” — and not make arrests “unless absolutely necessary.” The president of the detectives’ union told members in a letter to work in threes when out on the street, wear bulletproof vests and keep aware of their surroundings. At the same time, a memo from an NYPD chief asked officers to limit their comments “via all venues, including social media, to expressions of sorrow and condolence.”

Officials in New York investigated at least a dozen threats against police since the shootings, and one man was arrested at a Manhattan precinct after he walked in and said: “If I punch you in the face, how much time will I get?” and refused to leave.