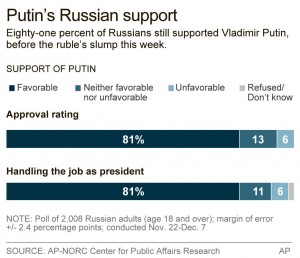 Sternly warning the West it cannot defang the metaphorical Russian bear, a confident-looking President Vladimir Putin promised Thursday to shore up the plummeting ruble and revive the economy within two years.

While he issued a litany of sharp rebukes against the West, Putin struck a conciliatory note on Ukraine, saying that the rebellious east should remain part of the country, backing a quick exchange of war prisoners and praising his Ukrainian counterpart.

The mixture of blistering anti-Western rhetoric and constructive signals appeared to indicate that Putin is eager to negotiate a face-saving solution to the Ukrainian crisis, but has no intention of conceding defeat in his standoff with the West.

In his first public appearance since the crash of the ruble’s value this week, Putin accepted responsibility for the economic crisis.

He said Western sanctions accounted for at least 25 percent of the ruble’s fall, but the main reason was Russia’s failure to ease its overwhelming dependence on oil and gas exports.

In his speech, the man who has led Russia for 15 years sought to soothe market fears, saying the country has sufficient currency reserves and would not resort to administrative controls, such as fixing exchange rates or obliging exporters to convert their Western currency holdings to rubles.

Following Putin’s performance, the Russian currency traded between 60 and 62 rubles to the dollar, roughly the same level as late Wednesday, when it rallied 12 percent after plummeting to a historic low of 80 rubles per dollar. Still, the currency has lost about half its value since January.

In Brussels, the European Union strengthened its sanctions against Russia with new measures Thursday that ban investment and discourage tourism in Crimea.

And in Washington, President Barack Obama signed legislation authorizing new sanctions on Russia but said he does not plan to impose the penalties outlined in the measure.

Putin shrugged off speculation that some members of his inner circle hurt by Western sanctions could rebel against him in a “palace coup,” citing strong public support.

An Associated Press-NORC Center for Public Affairs Research poll released Thursday backed up that view, recording his approval rating among Russians at 81 percent, a level far above typical ratings for world leaders.

Audi was the latest major company to suspend deliveries in Russia amid the ruble’s turmoil. Apple halted online sales earlier this week.

If the Kremlin fails to stabilize the ruble soon, panic could spread, triggering an even more massive run on banks and a sharp surge in inflation that could swiftly erode Putin’s support.

This article appeared in print on page 3 of the December 19th, 2014 edition of Hamodia.