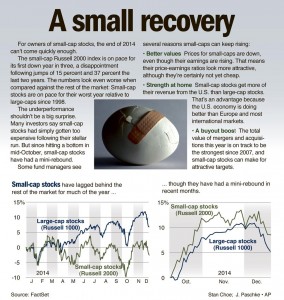 The Federal Reserve on Wednesday offered a strong signal that it was on track to raise interest rates sometime next year, altering a pledge to keep them near zero for a “considerable time” in a show of confidence in the U.S. economy.

Closing out a two-day meeting against a backdrop of solid domestic growth but trouble overseas, the U.S. central bank said in a statement it would take a “patient” approach in deciding when to bump borrowing costs higher.

In a news conference, Fed Chair Janet Yellen defined patient as “at least a couple of meetings,” meaning the Fed would not increase rates at least until April of next year. Financial markets initially interpreted the new statement as being on the dovish side, pushing expectations for an initial rate hike to October from September.

The statement “should be interpreted that it is unlikely to begin the normalization process for at least the next couple of meetings,” Yellen said. “That does not point to any preset or predetermined time.”

The central bank looked beyond economic difficulties in the euro zone, Japan, and Russia, and offered a mostly upbeat assessment of the U.S. economy’s prospects.

“Based on its current assessment, the committee judges that it can be patient in beginning to normalize the stance of monetary policy,” it said. Significantly, the Fed said it viewed that statement as “consistent” with its previous language that it would be a “considerable time” before it hiked rates.

While the growth outlook remained solid, Fed policymakers indicated they would take a slower approach to the pace of future rate hikes, a nod to the still-weak inflation picture.

The Fed dropped benchmark rates to near zero in December 2008 as it battled the financial crisis and deep recession.

Now, with the unemployment rate down to a six-year low of 5.8 percent, many economists think the Fed will begin to lift them around the middle of next year, an expectation that is already roiling global financial markets.

Updated quarterly forecasts released by the Fed on Wednesday showed policymakers expect the U.S. economy to remain on track despite a weak global environment, even though they do not envision inflation rising to their 2 percent goal anytime soon.

The projections, presented as a range that excludes the three highest and three lowest individual forecasts, foresee the economy growing between 2.6 percent and 3.0 percent in 2015, no change from September.

They expect the unemployment rate to move down to an average of between 5.2 percent and 5.3 percent toward the end of next year, a slight improvement over the prior forecast.

The Fed, however, acknowledged that headline inflation was likely to slow next year to between 1.0 percent and 1.6 percent, the result of a cratering in oil prices. Core inflation, which excludes volatile items like food and energy, is projected to dip only slightly next year and reach the Fed’s target by the end of 2016.

The median projected federal funds rate — the Fed’s main economic lever — was 1.125 percent for the end of 2015, a quarter percentage point drop from the last projection. Officials also indicated a slowing in the pace of rate increases in subsequent years.

“Economic activity is expanding at a moderate pace,” the Fed said, pointing to a recent strong jobs report as evidence that “underutilization of labor The more significant message was of the United States’ ability to stand on its own.

This article appeared in print on page 9 of the December 18th, 2014 edition of Hamodia.