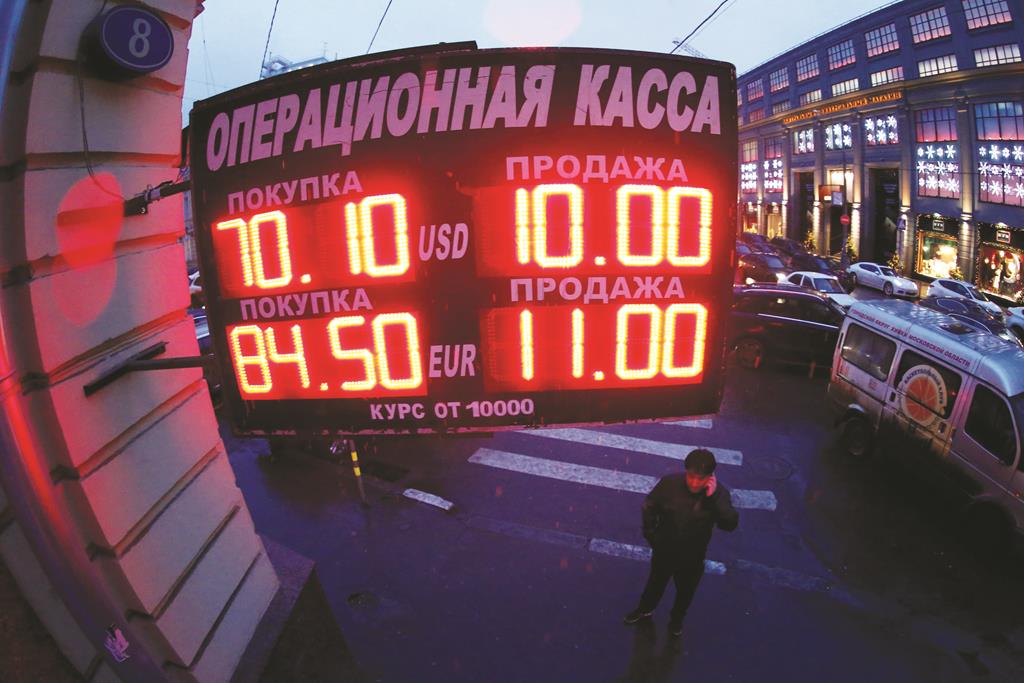 With economies in Europe, Japan, China and Latin America already ailing, fresh threats have emerged from Russia’s shriveled currency, its move to dramatically boost interest rates, and damage from plummeting oil prices and Western sanctions over Russia’s action in Ukraine.

The alarming 10 percent drop in the ruble over the past two days has amplified the economic turmoil in Russia. Investors fear that Russia may default on its foreign debt obligations — a move that would inflict hundreds of billions in losses on lenders abroad.

Some analysts also worry that tensions will further escalate between Russia and the United States and its European allies that imposed the sanctions. The White House upped the pressure Tuesday when President Barack Obama committed to approving additional sanctions.

“I do not expect him to blink,” said Ian Bremmer, president of the Eurasia Group, a political risk and consulting firm.

The financial consequences for the United States could be modest because of Russia’s diminished economic stature. Yet the geopolitical risk could ripple across continents.

Russia began the year as the world’s eighth-largest economy with a gross domestic product of $2.1 trillion, according to the World Bank. A single ruble is now worth less than two pennies, having lost about 50 percent of its value against the dollar since January.

This means Russia’s GDP has been halved in dollar terms, putting it roughly on par with Mexico and Indonesia as the world’s 15th largest economy.

Before financial markets opened Tuesday, the Bank of Russia hiked its key interest rate to protect the ruble’s value. In doing so, the bank hopes investors will find it more financially appealing to keep their money in Russia. Nevertheless, the ruble fell as much as 20 percent in trading before regaining its previous day’s value by the closing.

Russian officials have already projected that their economy will shrink nearly 5 percent next year. That will, by extension, put a slight squeeze on its trading partners in Europe and Asia.

Russia imports about $324 billion in goods annually, primarily from China, Germany, Ukraine, Belarus and Japan. Those imports have grown costlier because of the falling ruble.

One potential global risk comes from Russia seeking to retaliate against the sanctions by stepping-up cyberattacks against U.S. targets and asserting itself more aggressively in Ukraine and other nearby countries, Bremmer said.

On Tuesday, Russian Foreign Minister Sergei Lavrov argued in a French media interview that the sanctions were intended to end Putin’s regime.

Unlike during the previous ruble crash in 1998, Russia is unlikely to receive help from the International Monetary Fund and the World Bank, organizations backed by the United States and its European allies that contend that Russia has funneled direct support to rebels fighting in Ukraine.

Isolated and alone, Russia might then choose to default on some of its debt.

“Our deepest fear has been — and still is — that putting Mr. Putin in a ‘nothing-to-lose’ situation removes any constraint he might have had against reneging on his foreign debt obligations, which Russian borrowers probably cannot pay off or service now,” writes Carl Weinberg, chief economist at High Frequency Economics. Foreign lenders would have to brace for $670 billion in losses.

This possibility has sparked an investor retreat from Russia. But that pullback has also caused investors to flee other emerging market currencies that are deemed risky. They include Turkey, Brazil, South Africa and Indonesia, noted John Higgins, chief markets economist at Capital Economics.

Higgins said that oil prices are the central factor that will determine “the depth of Russia’s problems and the consequences for the global financial markets.” Should oil continue to collapse, the financial and geopolitical turbulence in Russia will worsen.

U.S. crude oil markets rose 2 cents to close at $55.93 a barrel on Tuesday, while the international counterpart fell $60 a barrel for the first time since May of 2009. Oil prices have been cut in half over the past six months.

Analysts generally attribute the plunge in oil prices to rising supplies and slowing demand as Europe and Japan falter and China’s growth weakens. But as the price drops further, fears are intensifying in financial markets that the decline is pointing to slower growth than many analysts had expected, said David Joy, chief market strategist at Ameriprise.

That could make the situation for Russia even more dire.

“Oil hasn’t found a bottom yet, so the pain is only going to get worse as the price of oil continues to fall,” Joy said.