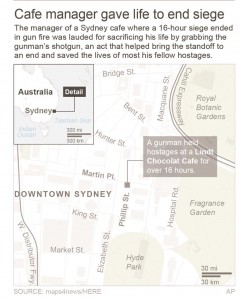 Horror over a deadly siege morphed into anger Tuesday as leaders of a grieving nation demanded to know how a man with a violent criminal history slipped through the cracks and ended up in a downtown Sydney cafe where he took 17 people hostage.

The 16-hour siege ended in a barrage of gunfire and screams early Tuesday morning when police stormed into the Lindt Chocolat Cafe in a desperate bid to free the hostages. Two of the hostages were killed, as was the terrorist, Man Haron Monis, a 50-year-old Iranian-born, self-styled cleric described by Australia’s prime minister as a deeply disturbed person carrying out a “sick fantasy.”

“How can someone who has had such a long and checkered history not be on the appropriate watch list? And how can someone like that be entirely at large in the community?” Prime Minister Tony Abbott asked at a news conference. “These are questions we need to look at carefully and calmly and methodically. That’s what we’ll be doing in the days and weeks ahead.”

Monis was convicted and sentenced last year to 300 hours of community service for sending what a judge called “grossly offensive” letters to families of soldiers killed in Afghanistan between 2007 and 2009. He later was charged with being an accessory to the murder of his ex-wife. He had been out on bail on all the charges.

That history prompted a flurry of questions that remained unanswered more than a day after the siege began Monday morning. Why was Monis out on bail? Why was he not on a terror watch list? How did he get a shotgun in a country with tough gun ownership laws?

“We are all outraged that this guy was on the street,” New South Wales Premier Mike Baird said. “We need to ensure that everything is done to learn from this.”

Alongside the fury and confusion was an outpouring of grief, as crowds of tearful mourners flocked to Martin Place, a plaza in the heart of Sydney’s financial and shopping district where the Lindt cafe is located. The mourners left mountains of flowers in honor of the two hostages who were killed: Katrina Dawson, a 38-year-old lawyer and mother of three, and Tori Johnson, the cafe’s 34-year-old manager. Officials have yet to say whether the two died in crossfire as police stormed in or were shot by their captor.

At an emotional memorial service attended by hundreds, Johnson was lauded for sacrificing his life and helping to bring the siege to an end by grabbing the gunman’s shotgun.

“Apparently seeing an opportunity, Tori grabbed the gun,” Sydney’s Catholic Archbishop Anthony Fisher said at the service. “Tragically, it went off, killing him. But it triggered the response of police and eventual freedom for most of the hostages.”

The siege began when Monis walked into the cafe during Monday morning rush hour, trapping 17 customers and staffers inside. He had some of the hostages record videos of themselves reciting his demands: to be delivered a flag of the Islamic State group and to speak directly with Abbott. He also forced some to hold a flag with an Islamic declaration of faith at the shop window.

Australian Muslim groups condemned the hostage-taking and said in a joint statement that the inscription of the Islamic flag held by the hostages was a “testimony of faith that has been misappropriated by misguided individuals.”

This article appeared in print on page 2 of the December 17th, 2014 edition of Hamodia.