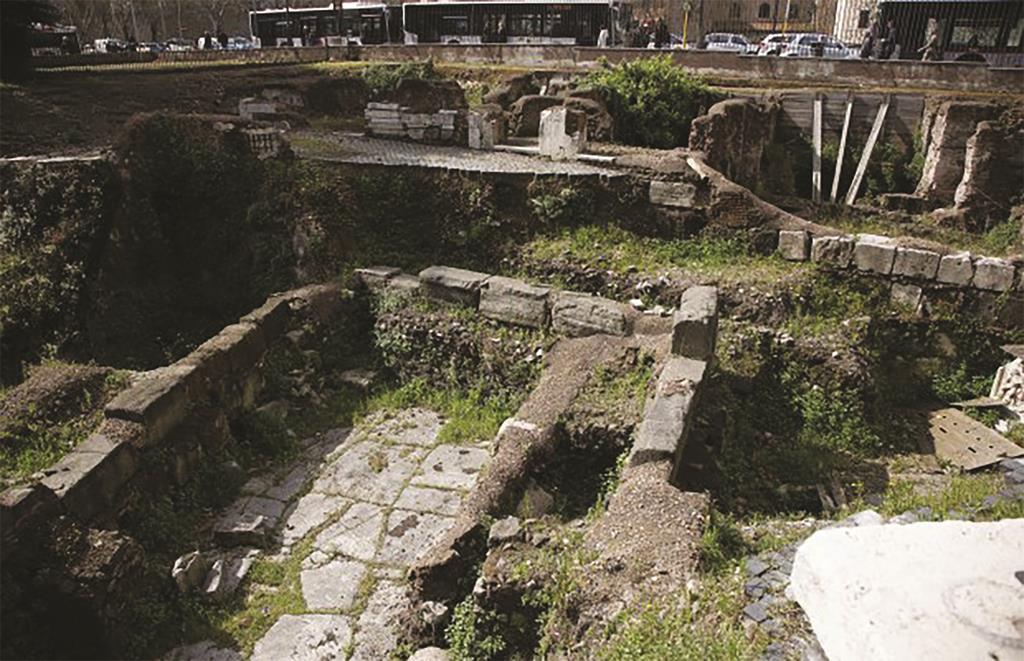 Jews who come to Rome generally want to visit its Great Synagogue and of course the old Jewish ghetto. Tourists are often directed to travel on Line 63 to the final station, right next to the synagogue courtyard, to a place called Monte Savelli, between the Tiber Island and the Capitol.

For many years, as soon as they stepped on the ground, those passing through the doors of the bus encountered the iron fences of an abandoned, thorn-filled lot, that here and there and somewhere in the middle had several abandoned and deserted buildings sticking out of the ground, mostly underground. No one offered an opinion about what they were. “Ancient ruins” like these are all over Rome.

But the secret of the abandoned lot next to the station was recently exposed, and it turns out that the trees within the fenced-in lot mark one of the vanished secrets of Jewish Rome — the “Little Jewish Ghetto,” the Ghettarello, as the place was called 300 years ago, or the nickname which the Jews called it then, “Macelletto.”

But over the years, and in the shadow of the conflicts between the papal court and the Jewish community in the city, the little ghetto was evacuated of its few Jews, and the place turned into a pile of ruins, until it was utterly forgotten by the city residents.

In the memory books of the Jews of Rome, Jewish community leaders had documented the place. They often talk about the great, central Jewish Ghetto located not far from the Great Synagogue, and, next to it, the small ghetto. It turns out that according to the records in the Jewish community books, which are archived in the Great Synagogue, two ghettos were established, more or less in the same year, in 1555, under orders from the Pope at the time. Paul IV wasn’t sympathetic to the Jews, and thought it was better that they live separately from Christians, enclosed in their own compound, with walls and gates that were shut tight at night and opened at dawn. Both men and women alike had to cover their heads with yellow hats to convey the fact that they were Jews.

Everyone knew where the big ghetto was established, but to where exactly had the little ghetto, built next to it, disappeared? No one knew. Had the earth swallowed it up? Apparently so. Literally.

The small ghetto stood unchanged for 150 years, next to its older brother, and throughout this period, approximately 4,000 people lived there, not all of them Jews. Only about half of them were Jews, members of about 180 families. The rest were Christians, and the common denominator among them was the fact that they were the poverty-stricken of Rome. They were different from the Jews from the large Jewish ghetto of the city, many of whom were affluent traders, government officials, doctors and professionals.

Even before World War II and the Holocaust, Rome’s Jews recognized the existence of the small ghetto. Researchers from those days visited the Jewish archives, and mentioned more than once that they found brown files on which appeared the word Ghettarello, “the small ghetto,” but these files were stashed away in the dark years, and no one knew where to look for the remnants of the place.

Only a few years ago, an archivist of Spanish origin, Giancarlo Spizzichino, undertook the task to dig through the archives of the Jews of Rome, go through one file after another in its basements and attics, until he found what he was looking for.

Community leaders encouraged him in his work.

His shock was great. The place he was searching for, which had disappeared from the consciousness of the masses, was situated opposite the windows of the Great Synagogue.

“I found it, I found it!” He ran through the corridors of the Jewish community offices, and all who knew that his life’s mission had been to locate the small, unknown ghetto, shared in his joy.

The city of Rome, the Jewish community and several wealthy Roman Jews and expatriates living throughout the world opened their pockets, and with the money collected, excavations have been conducted there during the last 20 months. The excavations proved that, right at that site, there had been a small Jewish ghetto.

From the beginning of the excavations, archaeologists discovered a few blocks with sampietrini pavement; these stone streets were typical of 16th-century Rome. Further excavations exposed an oven which obviously had been used to bake matzah with a silo next to it where the Jews stored the harvested grain which they saved, and watched over, for baking matzos. There were also the remains of at least two ritual baths. They made out the remnants of rooms and apartments inhabited by local Jews, as long as they were allowed to live there, before they were expelled 150 years ago.

The fact is that, already in the middle of the 16th century, the pope decided to close the small ghetto. “We should not keep the place,” he said. “Those who live there do not pay taxes, are poor, and it is best that they should seek a residence far from the city center.”

The Jewish community leaders, according to the findings of the secret file uncovered in the archives of the Jews of Rome, immediately picked up that the pope wanted the wealthy brothers dwelling in the big ghetto to pay a special tax for their poor brethren living in Ghettarello. They collected one thousand scudi, ($6,000), a huge sum in those days, and handed it over to the Christian leadership, who abandoned their plans to expel the Jews of the small ghetto, but reduced the permit so that only one synagogue was permitted, compared to the six synagogues that had been active in the unknown ghetto until then.

Alas, the funding for the Ghettarello excavations wasn’t sufficient to expose the foundations of the Forte Leone synagogue. Maybe it will be found later, if and when digging resumes. Perhaps they will also discover the other synagogues that were used by the Ghettarello Jews.

The pope boasted that he used the money he received from Rome’s   Jews to maintain the small ghetto to establish a large institution where missionaries worked to try and persuade Jews to give up their religion for Christianity. Their success was minimal, and the place was closed after several years.

Researcher Giancarlo Spizzichino relates that Jews continued living in the small ghetto until 1730. In this year, Pope Clement XII was appointed and upon assuming his seat, he issued a decree ordering the expulsion of Jews from the small ghetto. This time, he wouldn’t take money from the wealthy Jews to cancel the decree. “Only if the Jews agree to convert can they remain in their place,” he said. But the Jews were not willing to convert under any circumstances, which angered the pope even more.

You have to understand the background of Clemens XII, Lorenzo Corsini, the former treasurer of the papal state, who was chosen for the position not because of his greatness in the religious sphere, but because he was an excellent coordinator and financier. Those who voted him in were looking for a man who would save the Vatican, which found itself in a difficult period financially. The man, who had graduated the economics and finance faculty at the University of Pisa, immediately upon taking office began to seek quick and easy sources of income, and immediately came to the Jews. He chose a Shabbos morning to send his emissaries to the Chief Rabbi of Rome to announce his decision to expel the Jews from their small ghetto.

The Jews’ leaders’ conflict with the pope lasted for five years and, in the end, Clemens XII got his way. In 1735, the decree was confirmed and the ghetto Jews were forced to leave and disperse throughout the city and the state.

Their Christian neighbors took over their homes, and continued to live there for another hundred years, and then, for reasons that remain unclear to this day, also left the small ghetto. The houses were destroyed, the neighbors began throwing construction and home debris at the site, and 40 years ago, the City of Rome surrounded the site with high fences after the place had turned into a criminal den.

The compound’s gates are still closed, even after the initial excavations. Additional funds are now being sought to complete the excavation and restore whatever is possible, perhaps to join the ghetto to the Great Synagogue compound, and turn it into another tourist site of Italy’s capital. Until then, it is possible to grasp the fence posts, look inside and see the vanished ghetto, and the cats that have turned the ruins into their homes.

Jews lived here in the distant past. They lived, prayed, and raised their families here, until they couldn’t.