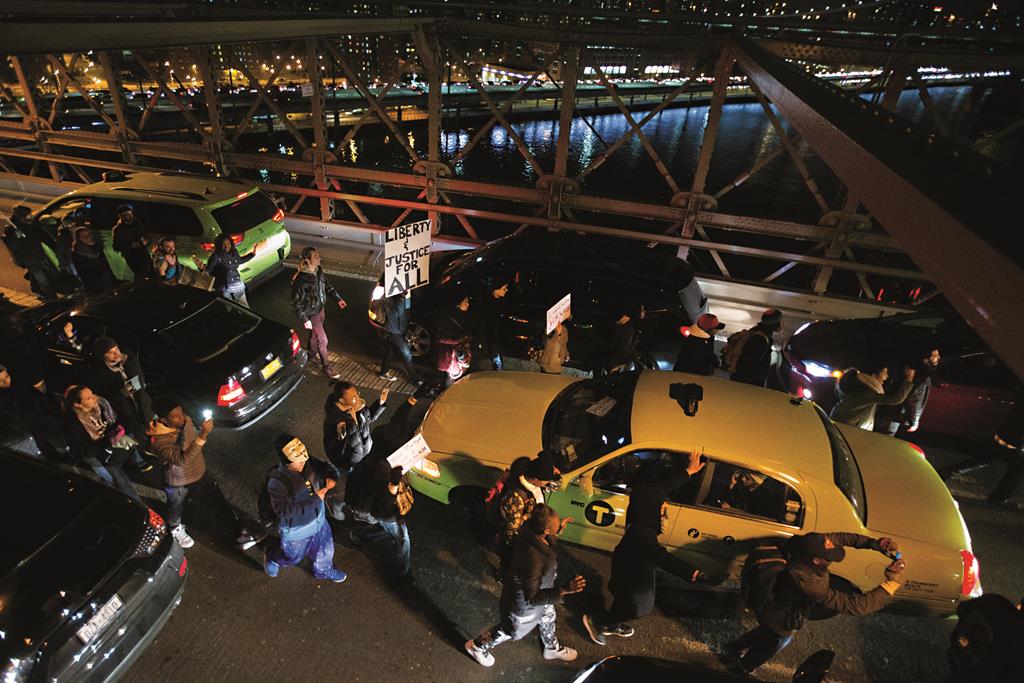 A Brooklyn man protesting recent police-involved deaths of black men assaulted two police officers, leading to his arrest and a statement by the mayor condemning the violence.

Eric Linsker, 29, was arrested shortly before 4:00 a.m. Sunday, hours after he allegedly tried to throw a garbage can at officers below him on the Brooklyn Bridge. He faces charges of assaulting a police officer, reckless endangerment and resisting arrest.

Chanting “I can’t breathe” and carrying signs saying “black lives matter,” they marched up Fifth Avenue and down Broadway before turning violent as they marched across the Brooklyn Bridge.

The NYPD said two lieutenants who were following the crowd as people went from Manhattan to Brooklyn attempted to arrest a man who they say was trying to throw a garbage can. As they attempted to take him into custody, other protesters attacked them.

The two lieutenants were injured, and the man they were initially trying to arrest fled. The officers were treated for bumps and bruises, including a broken nose.

Officers recovered a backpack, which they believe belongs to the man, containing three hammers and a black face mask.

In a separate incident, a person was arrested for disorderly conduct, and earlier Saturday the rear window of an NYPD traffic agent’s car was smashed.

Mayor Bill de Blasio condemned the violence, saying in a statement it “marks an ugly and unacceptable departure from the demonstrations thus far.”

De Blasio’s statement comes during the lowest point in mayor/NYPD relationships in decades over what they feel are de Blasio’s non-support for them during the high profile Eric Garner case. On Friday, the NYPD’s rank-and-file police union urged its members to ban de Blasio and City Council Speaker Melissa Mark-Viverito from their funerals.

The Patrolmen’s Benevolent Association told members not to let the mayor and speaker “insult their sacrifice” should they be killed in the line of duty. The union posted a waiver officers can sign requesting the two politicians not attend their funerals due to their “consistent refusal to show police officers the support and respect they deserve.”