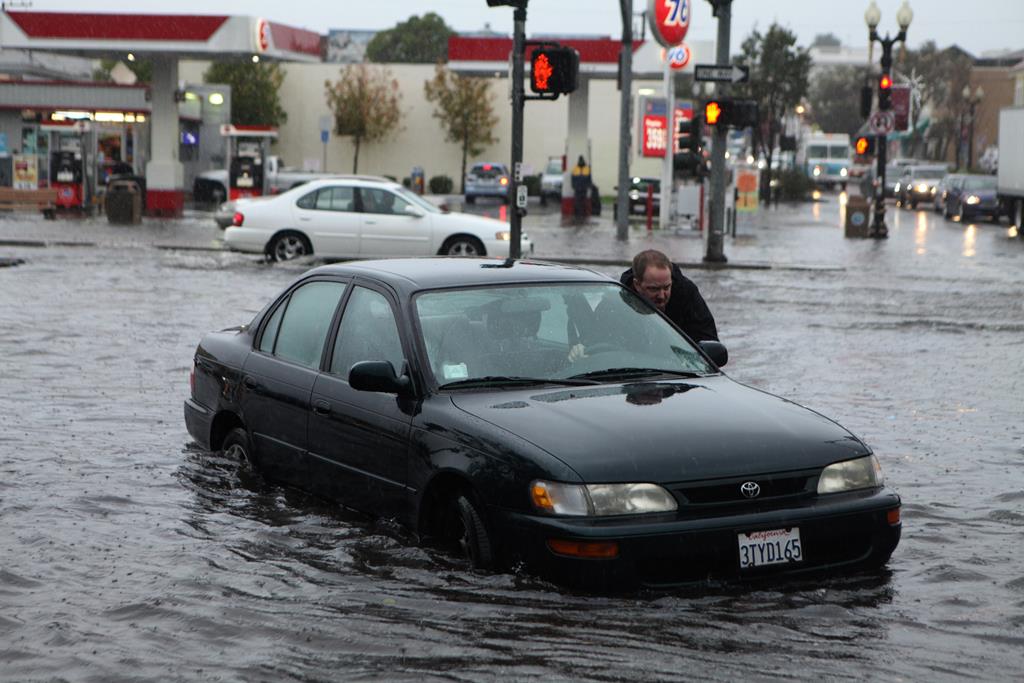 Strong gales and sheets of rain that knocked out electricity, flooded freeways and toppled trees in Northern California churned Thursday to a slide-prone Southern California bracing for its own beating.

“It’s a big storm, as we expected, and it’s headed south with very powerful winds and heavy rainfall,” said National Weather Service meteorologist Will Pi. Its strong winds felled a tree in southern Oregon,killing a homeless man, 40-year-old Phillip Crosby, who was sleeping on a trail.

Los Angeles should expect rain by the end of the day. Already, one apartment complex in a spot prone to mudslides in Riverside was evacuated. The San Bernardino Mountains have been razed by wildfires and were already doused by a storm last week, making them more vulnerable to mud flows.

In the San Francisco Bay Area Thursday, waves slammed onto waterfronts, ferries were bound to their docks, some airplanes were grounded and many schools canceled class.

The iconic suspension bridge is engineered to swing in cross winds, and engineers were standing by, but “the concern we have right now is more about vehicles,” spokeswoman Priya David Clemens said.

Close to a quarter-million customers lost power in Northern California. Pacific Gas & Electric’s online map showed lights out over thousands of square miles, from Humboldt near the Oregon border to Big Sur on the Central Coast.

This has been a particularly wet storm, with rains expected to continue through Friday evening across much of California, and some rivers and creeks were rising fast.

California’s farmers needed the dousing, but would need more storms this size to even begin to recover from a record drought.