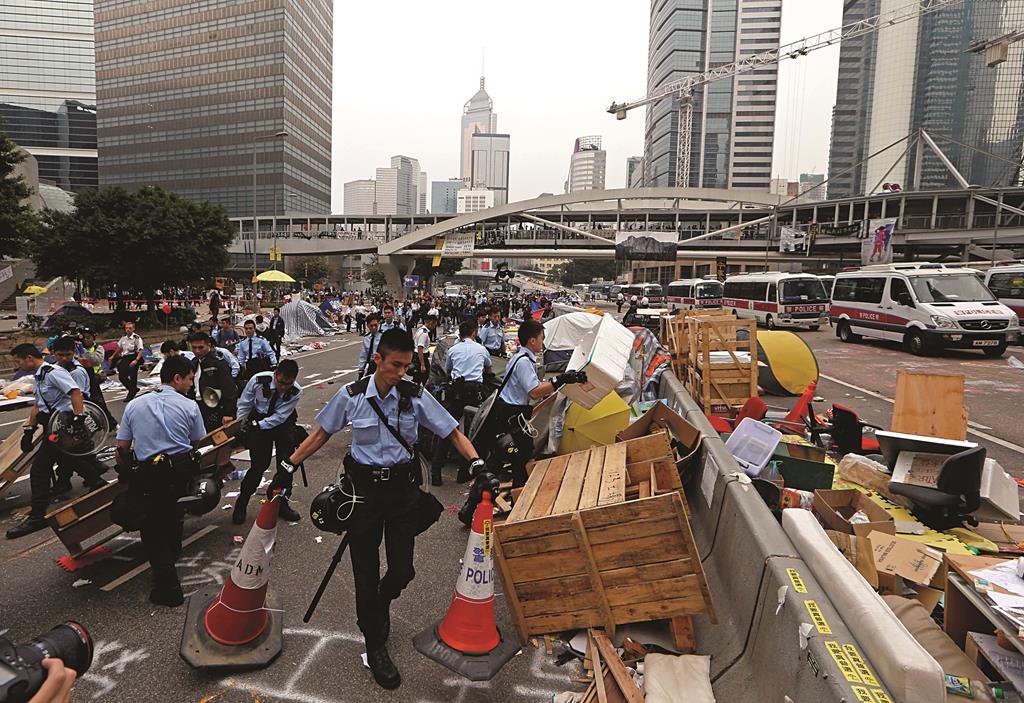 Hong Kong authorities demolished a protest camp Thursday at the heart of the city’s 2 1/2-month pro-democracy movement but scores of activists taken away by police vowed their fight for genuine elections wasn’t over.

Hundreds of police officers armed with chain saws and bolt cutters methodically dismantled barricades, tore down canopies and removed banners in a daylong operation to shut the protest site sprawled across a normally busy highway next to the specially administered Chinese city’s business district.

The operation was peaceful and unmarked by the violent clashes seen in previous confrontations between protesters and police. Traffic started flowing on the road by mid-evening.

The student-led protesters had occupied streets in the Admiralty neighborhood and two other areas since Sept. 28 to protest Beijing’s restrictions on the first election of the city’s top leader.

The unprecedented campaign, which began as a separate protest led by student and activist groups, got a jumpstart when police fired dozens of tear gas rounds on a group of demonstrators flooding into the area. The resulting movement paralyzed traffic, polarized public opinion and, activists said, marked the start of an era of civil disobedience in Hong Kong, an orderly Asian financial hub where residents are increasingly worried about mainland China’s increasing sway.

It also adds to the challenges for Chinese President Xi Jinping, who has taken a tough stance against dissent in other regions at the country’s edges.

Hundreds of demonstrators heeded police warnings to leave the protest zone Thursday to avoid being arrested, but dozens of students, pro-democracy lawmakers and others, including middle-aged and elderly supporters, remained sitting on the street. They chanted “I want true democracy” and “We will be back” but offered no resistance as they were taken away one by one, many lifted off the ground.