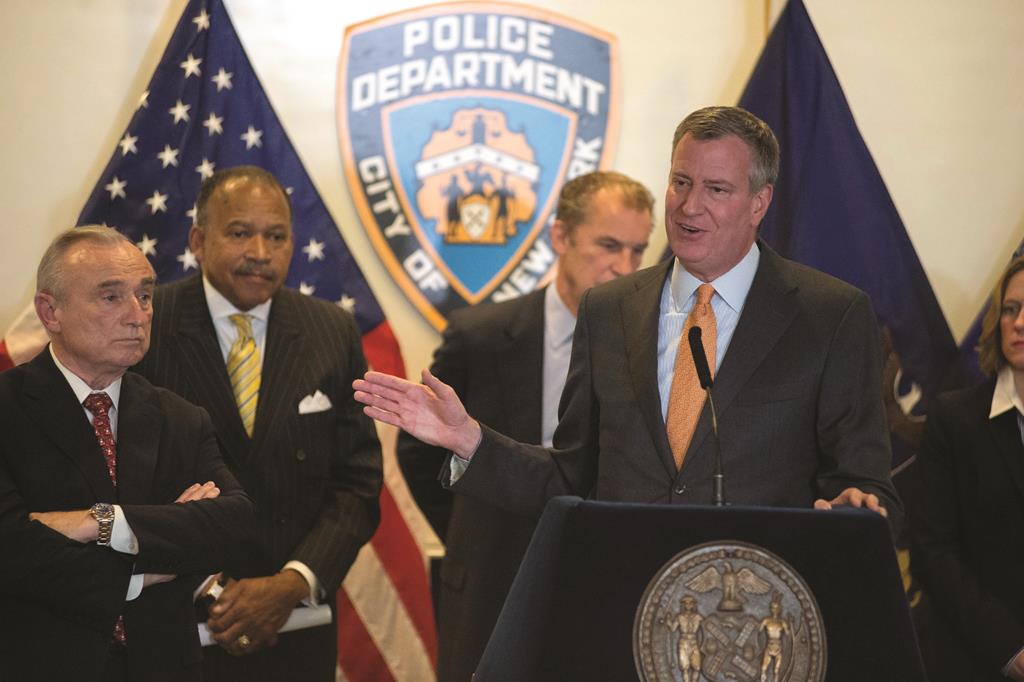 Mayor Bill de Blasio first spoke at a Staten Island church. Next, he gave an interview to a music radio station. That was followed by a blast email to his campaign mailing list and a press conference about a new training program aimed at reforming the New York Police Department.

All of these carefully choreographed events were aimed at those New Yorkers disheartened by the grand jury decision’s not to indict a white police officer in a black man’s death, including members of the communities of color who make up much of de Blasio’s political base.

But those same remarks angered a series of police union leaders who on Thursday accused de Blasio of betraying the cleared policeman and his fellow officers, underscoring the widening divide between City Hall and the rank-and-file police that has in part defined the mayor’s first year in office.

“What police officers felt yesterday after that press conference is that they were thrown under the bus,” said Patrick Lynch, the head of the Patrolmen’s Benevolent Association, which represents rank-and-file officers. “If the mayor wants to change policies, and wants us to stand down against crime, then say that.”

Hours after the grand jury declined to indict Daniel Pantaleo for the July death of Eric Garner, de Blasio gave an emotional speech at the church in which he connected the anger and sadness of the city’s minority communities with his own fears about his son Dante, who is half-black.

“I’ve had to worry over the years, [wife] Chirlane has had to worry: Is Dante safe each night?” said de Blasio, adding that the danger also emanated from “the very people they want to have faith in as their protectors.”

Noting that the NYPD protects Dante and ferries him to school, Lynch said that speech, praised by many for framing a citywide event on a personal level, painted the NYPD as pariahs.

De Blasio, when asked about Lynch’s comments, denied criticizing the NYPD but said it was a “reality” that “a lot of people feel fear” of the police.

The moment was just the latest in a growing series of conflicts between the mayor and the police unions.

Before de Blasio even took office in January, the unions denounced his fiery rhetoric in which he criticized the police tactic known as stop-and-frisk for discriminating against minorities.

They also were skeptical of his close ties to Al Sharpton, especially when the civil rights leader was given a prominent spot at City Hall to rail against Garner’s death and Police Commissioner William Bratton.

The unions — who are working on expired contracts — then pounced when Rachel Noerdlinger, one of Sharpton’s former aides who became de Blasio’s wife’s chief of staff, was found by the Department of Investigation to have omitted on her background check that her fiance had pleaded guilty of manslaughter and insulted police on social media.

Meanwhile, the Sergeant’s Benevolent Association took out a full-page ad in The New York Times opposing Brooklyn’s 2016 Democratic National Convention bid because Mayor de Blasio “has not earned the right to play host” due to his “dangerous” policies.

“The mayor has dropped the ball here by not showing any support for police,” said Ed Mullins, head of the SBA.