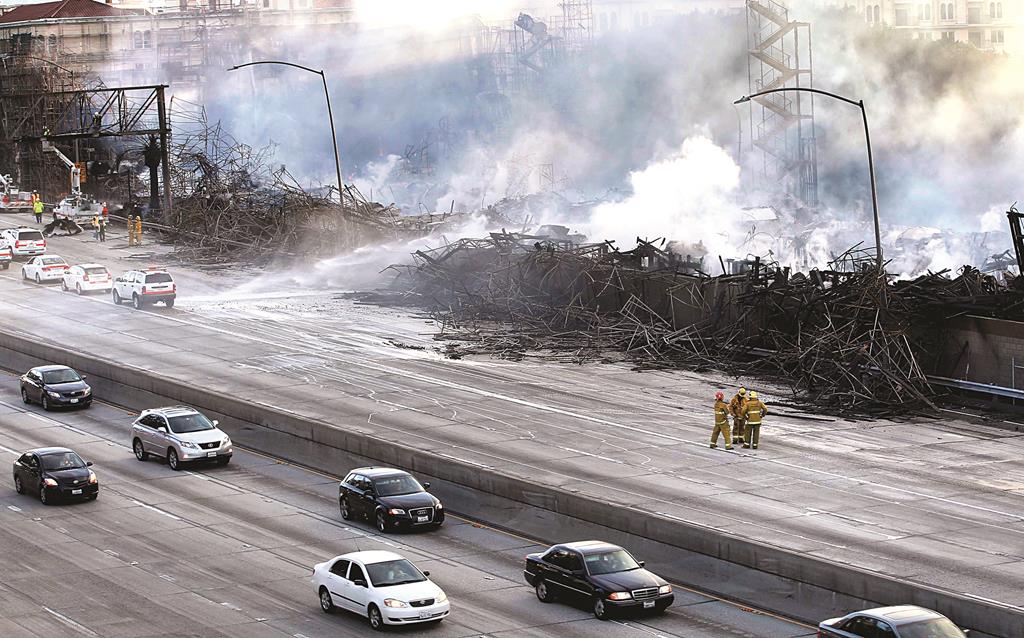 The fire early Monday in downtown Los Angeles engulfed an area the size of a city block, closed freeways and roads, burst windows of nearby buildings and melted freeway signs.

Flames could be seen for miles from the fire that broke out in the DaVinci apartment complex about 1:20 a.m. PST. The blaze closed roads and freeways, officials said. It also damaged nearby buildings, including one that houses city agencies.

“There are windows blown out all the way up the side of our building,” said Building and Safety spokesman Luke Zamperini.

More than 250 firefighters battled the blaze at the apartment tower under construction in the 900 block of Fremont Avenue, Los Angeles Fire Department spokesman David Ortiz said. The building had 1.3 million square feet of floor space, and officials said two-thirds of it was consumed by flames.

The bulk of the fire was put out in 90 minutes, but firefighters were continuing to deal with hot spots well into the morning, according to LAFD Chief Ralph Terrazas.

There were no injuries reported. The cause of the blaze was not yet known, but the Bureau of Alcohol, Tobacco, Firearms and Explosives was on scene, as well as an accelerant-sniffing dog to help arson investigators determine whether it was intentionally set, said Fire Department spokeswoman Katherine Main.