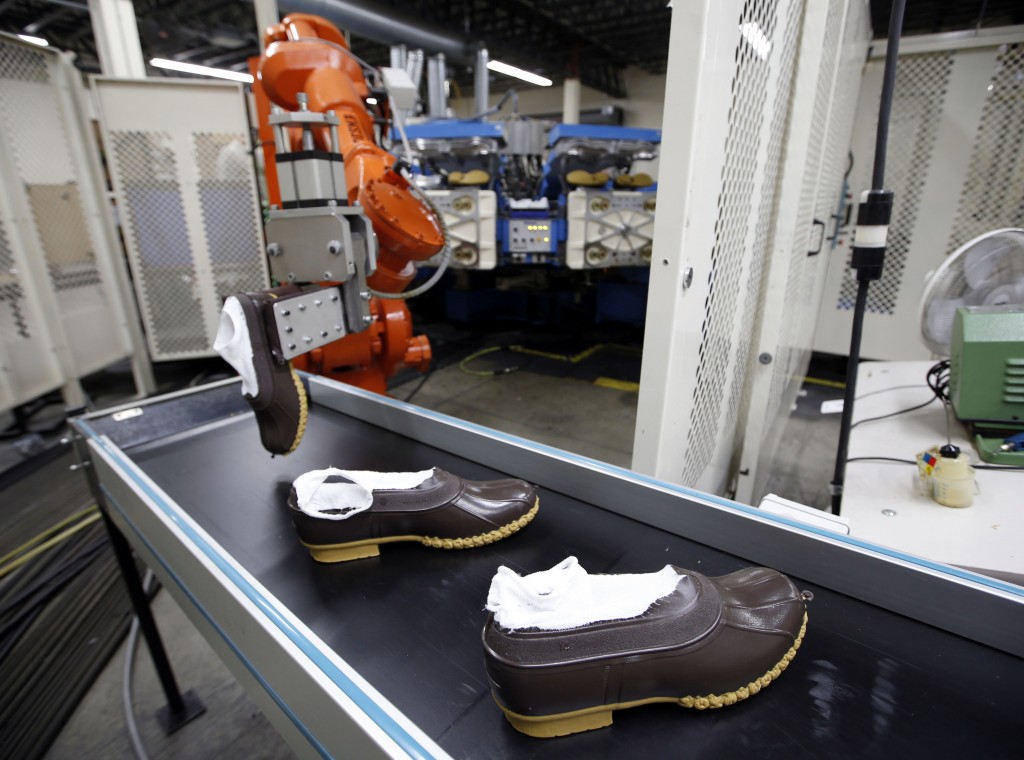 Whether it’s “lumberjack chic” or old-school utility, demand for L.L. Bean boots is surging – so much so that some customers will have to wait until February to receive their orders.

A backlog of 60,000 boot orders could grow to 100,000 by month’s end, and the company is in the process of hiring 100 workers and purchasing additional equipment to catch up with demand.

“Whatever is driving it is making us happy. We’re scurrying to get them produced,” said Royce Haines, L.L. Bean’s operations manager, who oversees Bean’s shoemaking operations.

L.L. Bean added a third shift this weekend at its leather-sewing operation in Brunswick, which joins an operation that makes rubber soles in Lewiston that’s already working around the clock.

In the coming year, the company is also hiring 100 workers, to bring the shoe-making operation to 500 workers, and spending $1 million to purchase a second injection-molding machine like one that’s currently in use in Lewiston. But the production boost won’t happen overnight, because it takes up to six months to get new workers fully trained.

L.L. Bean is in an enviable position with its boots because price-conscious young consumers are willing to pay for the original heritage item as opposed to a knockoff, much like the growing demand for original Sperry Top-Siders, said Marshal Cohen, chief industry analyst at market researcher NPD Group.

“You’ve got the younger consumer jumping all over it like they just discovered it, but the boomer generation has been wearing it for all their lives. So you’re getting growth from the top and the bottom of the age spectrum,” he said.

Bean’s boot is a rare success story for domestic shoe-making.

Other well-known brands like G.H. Bass, Cole Haan, Sebago and Dexter long ago moved their production out of Maine in search of cheaper labor. Nationwide, the number of shoe-manufacturing jobs dropped from more than 200,000 in the 1970s to about 14,000 last year, according to the U.S. Labor Department.

Many of L.L. Bean’s products are now made overseas, as well, but the family-owned company has insisted on keeping production of its iconic boot in Maine.

L.L Bean’s familiar boot started with the original “Maine hunting shoe” first produced by Leon Leonwood Bean in 1912. These days, the company has two giant “L.L. Bean Bootmobiles” that travel the country to promote the brand, and tourists pose for photos next to a giant boot outside the flagship store in Freeport, Maine.

For now, there’s no sign that demand is waning.

A couple of miles from the Lewiston plant, many Bates College students trudging across the snowy campus on a recent day were keeping their feet warm and dry with Bean boots.

“It’s kind of a running joke that your outfit is not complete without a pair of Bean boots and a North Face jacket,” said Caitrin Griffin, a junior from outside Chicago. “As a Bates student, that’s what you wear. You see everyone walking around in them, especially after the first snowfall.”