Jobs and Wages Surge in November, Raising Expectations for 2015 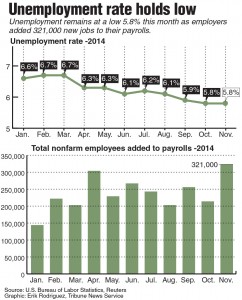 November hiring smashed expectations and raised prospects for stronger-than-expected economic growth in 2015, experts said after a solid jobs report from the government Friday.

Employers added 321,000 jobs in November, hourly earnings surged, and the unemployment rate held steady at 5.8 percent, the Labor Department said. Gains were spread across sectors and came in about 100,000 above most mainstream economic forecasts.

“An outstanding employment report this month that caps the improvement in real … growth we have seen in recent quarters,” said Scott Anderson, the chief economist for Bank of the West in San Francisco. “The report fits in well with our 3.1 percent growth outlook for the U.S. economy next year, but if job gains like these are sustained in the months ahead, our forecasts could prove too conservative.”

That’s the longest streak of private-sector job growth on record. The Labor Department increased the preliminary September and October numbers by a combined 44,000. Over the past three months, hiring has averaged about 278,000 per month.

“Boom. Job reports are rarely ever as strong as today’s numbers,” said Mark Zandi, the chief economist for Moody’s Analytics. “There were big, broad-based job gains, stronger wage growth and more hours worked per week. The job market is in full swing.”

Analysts at Bank of America Merrill Lynch cheered the jobs report with this headline: “Deck the halls with boughs of hiring.” They now anticipate strong growth for next year.

“The labor market continues to show momentum, consistent with our view that the economy will realize above 3 percent growth next year,” said the report penned by Michelle Meyer, a senior economist.

One especially heartening number Friday was the month-over-month gain of 0.4 percentage points in the average hourly earnings of workers. If sustained, it might mean that wages will finally catch up with job growth.

Wage growth plunged in the Great Recession and remains a laggard in an otherwise solidifying recovery.

When viewed over the course of the year, private-sector average hourly earnings “grew 2.1 percent annually in November — similar to what we’ve seen this year so far — which shows that the labor market is still far from healthy,” said Elise Gould, an economist with the liberal Economic Policy Institute.

Republicans homed in on that glass-half-empty aspect of Friday’s report.

“While it’s welcome news that more people found work last month … middle-class families across the country, including my home state of Ohio, are struggling to get by on wages that haven’t kept pace with rising costs,” House Speaker John Boehner said in a statement.

Taking the half-full view, Jason Furman, the chief of the White House Council of Economic Advisers, said the average workweek in the private sector rose to 34.6 hours in November, “the highest since 2008.”

Hiring was solid across sectors. The professional and business services sector, which encompasses better-paying jobs, added 86,000 positions in November. The hard-hit construction sector added 20,000 in a month in which weather begins to weigh against hiring.

Retailers added a strong 50,200 jobs in November as they readied for the year-end shopping season.

“Solid seasonal demand, reduced prices at the pump and the high — though erratic — levels of business and consumer confidence, all are supportive of job gains,” said Jack Kleinhenz, the chief economist for the National Retail Federation. “We remain optimistic that we are gaining traction to a more normal labor market in the near future, which should contribute to wage and salary growth.”

Manufacturers added 28,000 jobs in the month, and a range of other economic indicators suggest that trend will continue next year.

“These data show that the more robust growth in new orders and output seen in other indicators are beginning to translate into healthier hiring figures,” Chad Moutray, the chief economist for the National Association of Manufacturers, said in his blog Shopfloor.org. “Indeed, manufacturing leaders remain mostly upbeat in their outlook, which should bode well for hiring in the sector as we move into 2015.”

NOVEMBER BY THE NUMBERS

This article appeared in print in the December 8th, 2014 edition of Hamodia.