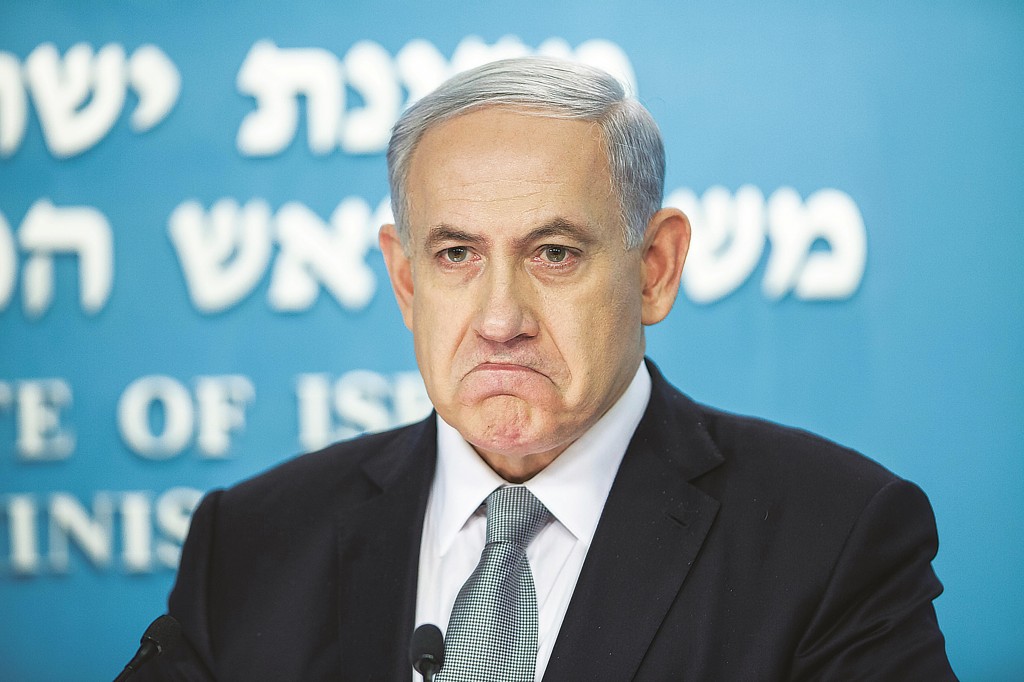 The prime minister said he will formally call for the dissolution of the Knesset as soon as possible in order to go to elections and “receive a clear mandate from the people to lead Israel.”

“In the last couple of weeks and over the last day, Lapid and Livni have forcefully attacked the government,” he said earlier. “I will not tolerate this opposition from within.

Earlier on Tuesday, Livni fired yet another fusillade at Netanyahu, accusing his government of “extremism, provocativeness and paranoia,” without knowing how to fight terror while also “upholding freedom.”

It was not long after that that Netanyahu answered her with a directive to Cabinet Secretary Avichai Mandelblit to remove the two senior ministers.

MK Ze’ev Elkin of Likud said the party would likely back an opposition motion to dissolve the Knesset, expected on Wednesday. That would throw MKs into several days of discussions on an election date, probably in March. The Knesset would then dissolve itself next week, with the government staying on until a new one is sworn in.

An unmistakable sign of impending elections appeared on Tuesday morning as the Israeli media rediscovered the chareidi parties, carrying allegations from Yair Lapid that Netanyahu had made a secret deal to get their backing.

“Instead of improving middle-class salaries and helping the disadvantaged, the prime minister would rather raise taxes and pay the chareidi parties out of the pocket of the Israeli middle class. This is the bad, old-fashioned deal with the chareidim.”

After almost two years of being deliberately excluded from the coalition — largely at Lapid’s insistence — the Yesh Yatid leader found a use for the chareidim, namely to bash Netanyahu. Making it even more egregious was the fact that last week Lapid had made overtures to chareidi MK’s, notably Rabbi Yaakov Litzman, to join a government with him.

UTJ MK Rabbi Moshe Gafni rejected the allegations, telling reporters that “there are no guarantees and no promises,” reiterating the position taken by UTJ and Shas in recent days, ever since the rumors surfaced.

Rabbi Gafni questioned why the chareidi parties would enter any such agreement with Netanyahu, considering the anti-chareidi policies of his government.

“Why should the prime minister be able to rely on us, when he has not supported us this past year and a half?” asked Gafni.

Similarly, Shas chairman Aryeh Deri dismissed the reports. “There is no deal before the election, we have no agreement,” Deri said at a press conference in Ashdod. “There were two deals, from the left and from the right. Yesterday, they tried to convince me not to hold elections and to form a government without Netanyahu. As we have consistently said, ‘Alternative government? Only after the elections.’”

Justice Minister Tzipi Livni was the only Movement minister left in the government, after Environmental Protection Minister Amir Peretz resigned on November 9 in protest against Lapid’s 2015 state budget.

Following Netanyahu’s press conference, Meretz Zehava Gal-On got in an early shot in the election campaign, deriding his message to the people as: “I failed; elect me again.”

“It is a shame that Livni [Justice Minister Tzipi Livni] and Lapid [Finance Minister Yair Lapid] waited for Netanyahu to fire them. They should have quit a long time ago so as not to be collaborators with this government,” Gal-on said.

The long-simmering coalition crisis erupted in acrimony Monday night when Lapid walked out on a “reconciliation” meeting with Netanyahu.

“The government must work in harmony,” Netanyahu told a Likud faction earlier Monday. “For this reason I supported bills that I wasn’t completely at ease with, such as the [Lapid-sponsored] 0% VAT bill.

“Unfortunately, I did not get the support, nor did I even receive the most basic commitment — the loyalty and responsibility of ministers sitting in the government.”

Lapid rejected Netanyahu’s demands that he stop attacking the coalition, including criticizing Israel’s construction in Yerushalayim and its relationship with the United States; transfer NIS 6 billion to the IDF for training; support the Nationality Law; and, hardest of all for Lapid, freeze the 0% VAT bill.

On Tuesday morning, Lapid lashed out at the prime minister, berating him as irresponsible for taking the country to “unnecessary elections.”

“There was a good alternative instead of wasting billions of shekels on unnecessary elections and paralyzing the economy,” he told an energy conference in Haifa, which he turned into a political convention. “We could have passed a social budget, added billions to education, health, welfare and internal security, a national housing program that would dramatically increase supply and give young couples a VAT reduction.”

Whether there was a good alternative to elections or not, the adverse impact of coalition failure on the economy was already evident on Tuesday as the shekel’s downward slide accelerated. The exchange rate was a rapidly moving target, at NIS 3.976/$ Tuesday afternoon, zooming toward the threshold rate of 4.0.

Epsilon Investment House Managing Director Idan Azoulay said, “What we are seeing with the shekel-dollar exchange rate is a reaction, perhaps strong, to bringing elections forward. Foreign investors are not such a significant factor in the market at the moment, so it’s not coming from there — it’s a response to the rise in the economy’s risk premium.

The cost of holding elections alone will be a staggering NIS 1.5-2 billion, the Ministry of Finance estimates.

This estimate includes NIS 450 million in direct costs (money for political parties and salary and related expenses of the central election committee and the election day mechanism). The Ministry of Finance estimates the loss of revenues to the economy of the day off work on election day at NIS1-1.5 billion.