Somali al Shabaab Islamist terrorists killed 36 non-Muslim workers at a quarry in northeast Kenya on Tuesday, prompting the president to sweep out his top security officials in order to tackle a relentless wave of violence.

Kenyans have grown increasingly critical of President Uhuru Kenyatta for failing to do more to defend the east African nation from the incessant terror attacks, which have killed well over 200 people since 2013.

Al Shabaab has claimed responsibility for much of the bloodshed and says it will keep it up to persuade Kenya to pull its troops out of neighboring Somalia, where its forces have joined other African Union troops battling the terrorists.

In Tuesday’s attack, gunmen crept up on dozens of workers sleeping in tents, a resident said, in the same area near the Somali border where a bus was hijacked just over a week ago and 28 passengers killed.

“The militia separated the Muslims, then ordered the non-Muslims to lie down,” and killed them, said Hassan Duba, an elder at a nearby village.

He called on opponents, who have criticized his handling of security policy, to unite in fighting terror. “Our bickering only emboldens the enemy,” the president said. 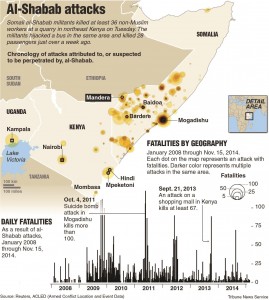 As with past attacks, al Shabaab said it was punishing Kenya for sending troops to join African peacekeepers battling the Islamists in Somalia. In a statement, it put the death toll at 40 and called the victims “Kenyan crusaders”.

Kenya’s government and a witness said 36 people were killed. The government cited survivors saying about 20 fighters assaulted the quarry, about 10 miles from the town of Mandera. One person died in another attack on the northern town of Wajir late on Monday.

Western diplomats say that Kenya’s security services, which receive support from Britain, the United States and others, are hobbled by poor coordination.

Government opponents say the troops in Somalia have not protected Kenya and should be withdrawn. The government has repeatedly said it will not pull the troops out.

Al Shabaab has been driven out of several strongholds in Somalia by an offensive by African Union and Somali troops this year, but analysts said it would not prevent the group from carrying out guerrilla-style attacks or striking abroad.

“This [latest attack] seems very much in line with al Shabaab strategy,” said Cedric Barnes of the Crisis Group in Nairobi of the latest attack. “It’s partly a result of al Shabaab being squeezed in Somalia.”

This article appeared in print on page 6 of the December 3rd, 2014 edition of Hamodia.