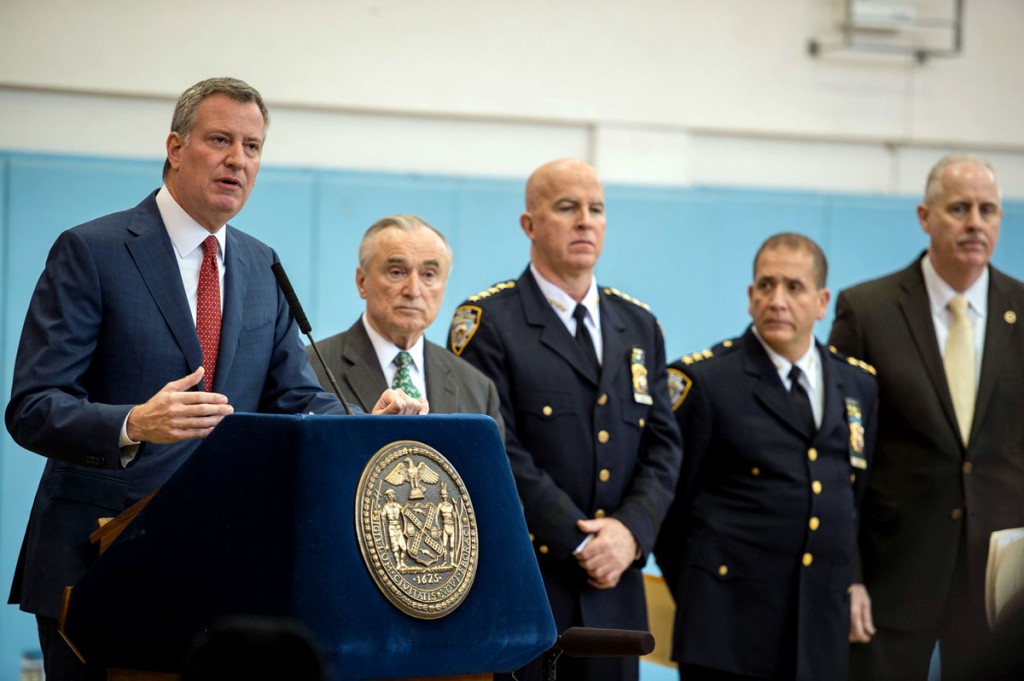 Mayor Bill de Blasio and Police Commissioner William Bratton on Tuesday touted the continued reduction of crime in New York City and their reforms to its police department as the city braces for a grand jury’s decision on whether to indict an officer in a chokehold death.

Overall crime has fallen 4.4 percent from this time a year ago, and homicides are down 6.8 percent from the end of November 2013, according to police statistics. And de Blasio said the city experienced its safest August-to-November period since 1993, when the Compstat system was introduced to track crimes.

Drops in crime from a year ago were seen in nearly all major categories, though shootings were up slightly. A surge of police officers into public housing buildings after a spike in crime there earlier this year had largely worked, though a few developments remain prone to violence. And Bratton took pride in noting that the city’s transit system, which serves between 5.5 and 6 million people daily, averages a mere five crimes a day.

The news conference announcing the public safety successes — held at a Brooklyn housing project where crime has fallen — resembled a victory lap for de Blasio, who took office in January amid charges from political rivals that crime would rise under the watch of the city’s first Democratic mayor in a generation.

But it also gave the mayor a chance to remind New Yorkers of the changes he’s implemented to the NYPD at a time when the relationship between police and communities of color has fallen under an intense spotlight nationwide in the wake of the Michael Brown shooting in Ferguson, Missouri, and Eric Garner’s chokehold death on Staten Island.

The NYPD’s use of stop-question-and-frisk has fallen 79 percent in the first three-quarters of 2014. The administration’s new policy to stop making arrests for possession of small amounts of marijuana has resulted in a 61.2 percent decrease in busts since it went into effect two weeks ago.

Garner’s case was sent to a Staten Island grand jury, which Bratton said was expected to deliver its decision this week. He said the NYPD was prepared to accommodate demonstrators who may be upset with whatever the grand jury decides but vowed that there would not be violence akin to what occurred in Missouri.

“We have the ability to have a level of tolerance — breathing room, if you will,” Bratton said. “People have a right to demonstrate, to protest. But if they engage in criminal activity like vandalism or actual crime, they’ll get arrested, it’s quite simple.”