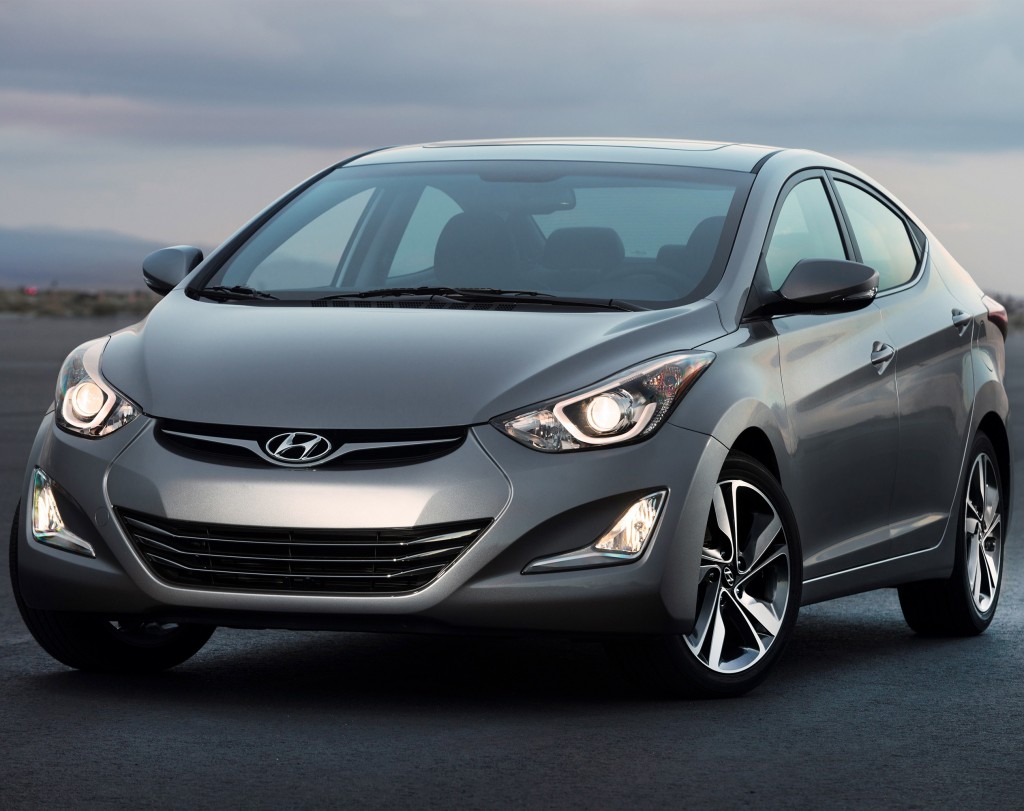 Elantra comes in three models — SE, Limited and Sport — with seven exterior colors and three interior colors offered, priced from $17,200-$22,700. A six-speed manual transmission is offered on the SE and the Sport for $1,000 less than the six-speed automatic with Shiftronic.

Exterior upgrades and additions include the new front and rear fascia with a new black two-tone rear diffuser for all models; projector headlights with LED accents and LED taillights on the Sport and Limited; chrome beltline molding on Sport and Limited; exposed single exhaust tip on Sport; new, more technical fog light styling for all; redesigned 17-inch sculpted five-spoke two-tone alloy wheels on Sport; and a rear spoiler on Sport.

The new open-mouth lower bumper and grille are more dynamic, and the L-shaped foglights draw the eye to the corners of the bumper, emphasizing the width of the vehicle. Elantra gets a touch of attitude from the more-technical-looking headlight and taillight LED accents.

Elantra Sport carries the Fluidic Sculpture design language for which Hyundai is noted, with sharp sculpting around the wheel wells, down the hood from cowl to grille, along the bottom of the bumpers and around the headlights and taillights. The more-prominent design reinforces the power and speed of the Sport model.

The standard audio system in the Elantra SE and Sport models has AM/FM/Sirius XM/CD/MP3, six speakers and iPod/USB/auxiliary inputs. The system shares a 4.3-inch color touchscreen with a standard rearview camera.

The 173 horsepower is 25 more than the 2013 1.8-liter engine, an increase of 17 percent, with little difference in fuel economy. My Elantra Sport was EPA-rated at 24 mpg in the city and 35 on the highway, with a ULEV emissions rating. Driving mostly on the highway for this review, I averaged 30.8 mpg.

Leather, bolstered sport front seats in black were heated with lumbar support for the driver. Front passengers had 40 inches of headroom and 43.6 inches of legroom; rear outboard passengers had 37 inches and 33.1 inches. The leather-wrapped steering wheel, trimmed in pewter-color metallic, had controls for cruise, audio and phone.

Pewter-color metallic curved across the door panels and down to the armrests, around the control panel on the center stack and on the sides of the center console. The doors had small cubbies on the armrests, and door pockets with bottle holders.

The center console had two large cupholders behind the leather-wrapped shifter knob, an enclosed cubby in front of the shifter with a power outlet and the audio input jacks, and a medium cubby under the armrest.

Rear passengers had one seatback pocket on the front passenger seat, a pull-down center armrest with two cupholders, two sets of lower anchors and three upper tethers for child seats, small cubbies on the door armrests, and door pockets with bottle holders.

Entering and exiting the rear seat was easy, and the outboard sport-style seats were comfortable for a small-to-medium-sized adult or children in car seats.

The rear seatback folded 60/40 using levers on the upper interior lip of the trunk, increasing the cargo space as needed for larger objects such as bikes, snowboards or DIY supplies. With the seatbacks in place, the trunk could handle 14.8 cubic feet of groceries, golf bags, small strollers, luggage or weekend sports equipment.

My Elantra had a tilt-and-slide sunroof, an emergency tire-repair kit in lieu of a spare, and optional carpeted floor mats ($125).