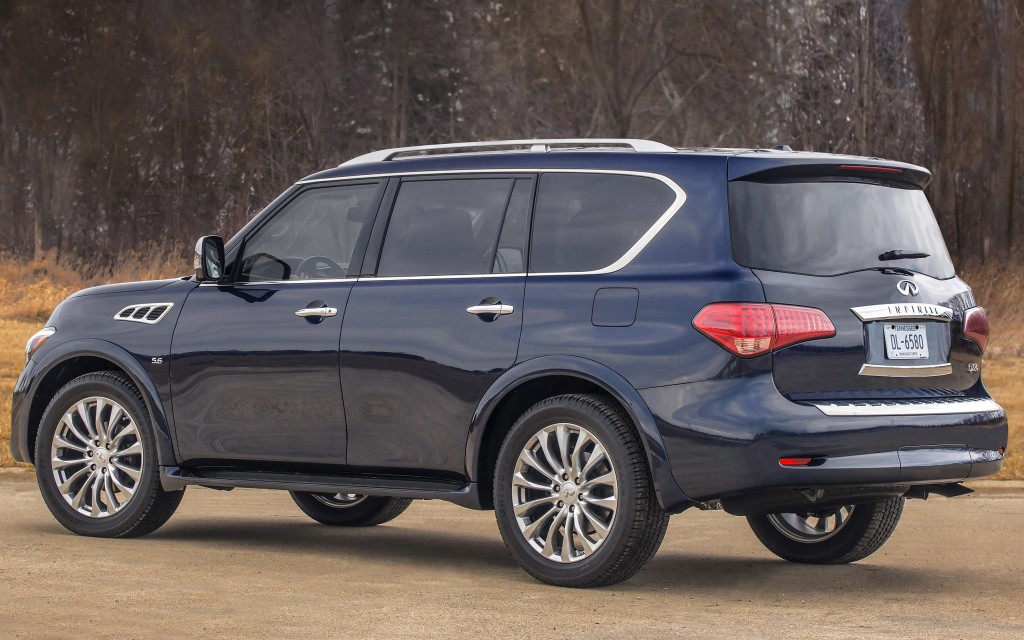 There are also some upgrades to the QX80’s luxurious interior. Mocha Burl (formerly available only in the Deluxe Touring Package) has replaced Tuscan Burl as the standard interior trim. A Mocha Burl and leather-wrapped steering wheel are included. A new Strafford Burl trim is offered in the Deluxe Technology Package.

Our tester included the Limited and Theater packages, which raised the total price to $79,745 (including freight).

If an SUV with such a high price is in your range, the QX80 would be a great choice. It’s a true body-on-frame, truck-style sport utility — one of the few remaining traditional SUVs still on the market.

All QX80 models are powered by a 5.6-liter V-8 engine with 400 horsepower and 413 pound-feet of torque, connected to a seven-speed automatic transmission. That’s plenty of power, even when the vehicle is fully loaded with people and gear. We gave it a good workout, even driving on some steep mountain roads.

This is a heavy vehicle — 5,595 pounds for the two-wheel-drive, and 5,855 pounds for the four-wheel drive — but the ride is smooth and quiet, and the engine never seemed to strain, even in the mountains.

It handles easily, too, considering its size. And while its four-wheel drive certainly is capable, I don’t recommend the QX80 for serious trail-driving because it’s too big for tight spots, and too expensive to get banged up.

Last year, Infiniti added its advanced Moving Object Detection system as a standard feature on the QX80. It works in conjunction with the vehicle’s Around View Monitor, one of the coolest features available on Infiniti vehicles.

The object-detection system uses front and rear sonar to provide audible and visual warnings to the driver if, when starting to go forward or backward, there is a moving object in front or behind the vehicle.

Moving objects are visible on the dash screen through the Around View Monitor, which combines the views from four super-wide-angle cameras – front, rear and both sides – to project a 360-degree view of the area around the vehicle, seemingly from overhead.

Eight people can ride in a QX, unless it’s configured like the one we tested, which came with the optional seven-passenger seating arrangement (available with no extra charge). There were two comfortable captain’s chairs in the middle row rather than a three-person bench, which is a no-cost option.

Kids onboard can be kept entertained by the Theater Package, which adds a rear DVD player with two seven-inch screens in the backs of the front headrests, two pairs of wireless headphones, a remote control, a 120-volt power outlet, auxiliary audio/visual input jacks, second-row heated seats and remote tip-up second seats.

With its first complete redesign three years ago, the QX80 no longer shares its chassis with the Nissan Armada, and it’s now made in Japan, rather than in Canton, Miss., where the original model was assembled. But there still are a lot of similarities between the two vehicles, although the QX is fancier.

There is comfortable seating for everyone on board, even in the third row. During our test, teenagers rode in the middle-row captain’s chairs, which can be quickly folded forward to allow access to the third row. The third row was convenient when we had more than four people going out to dine or explore.

Not using the third row for seating frees up cargo space. There’s 16.5 cubic feet of space behind the third seat, which isn’t really enough for the necessities for a long family trip. With the third seat folded (60/40 split, power fold), the cargo area opens up to cavernous size.

EPA ratings are typical for this vehicle class — 14 mpg city/20 highway (with either rear- or four-wheel drive). On our trip, which was mostly highway driving, we averaged about 15.8 mpg.

For those with RVs, boats or horses, the QX is capable of pulling trailers weighing up to 8,500 pounds.

You can bring your own music with an iPod or iPhone and connect it to the outstanding Bose audio system, which includes 15 speakers strategically placed throughout the vehicle. The iPod music functions of the iPhone can be controlled through the audio system, with playlists showing on the in-dash color monitor.

To help reduce drag, the QX has a front chin spoiler, rear liftgate spoiler and streamlined outside mirrors. It has a 0.37 coefficient of drag, and there is “zero lift” from air passing underneath, Infiniti says.

Available adaptive self-leveling headlights are designed to move slightly in the same direction as the vehicle to provide illumination of the area into which the car is turning. The standard Infiniti Hard Drive Navigation System includes a backup-camera along with the Around View Monitor system.

The off-road-capable four-wheel-drive system has low-range gearing for hills, sand and mud on the trail. In automatic mode (high range only), the system can send up to half of the power to the front wheels; in normal mode, the rear wheels get the power. Both models come with Hill Start Assist, which prevents rollback when the vehicle is stopped on a hill and the driver releases the foot brake.

Highlights: The QX80 (formerly the QX56) is a premium family hauler with lots of power, a smooth ride, and a long list of available high-tech features.

Negatives: Can get quite pricey with all the extras.