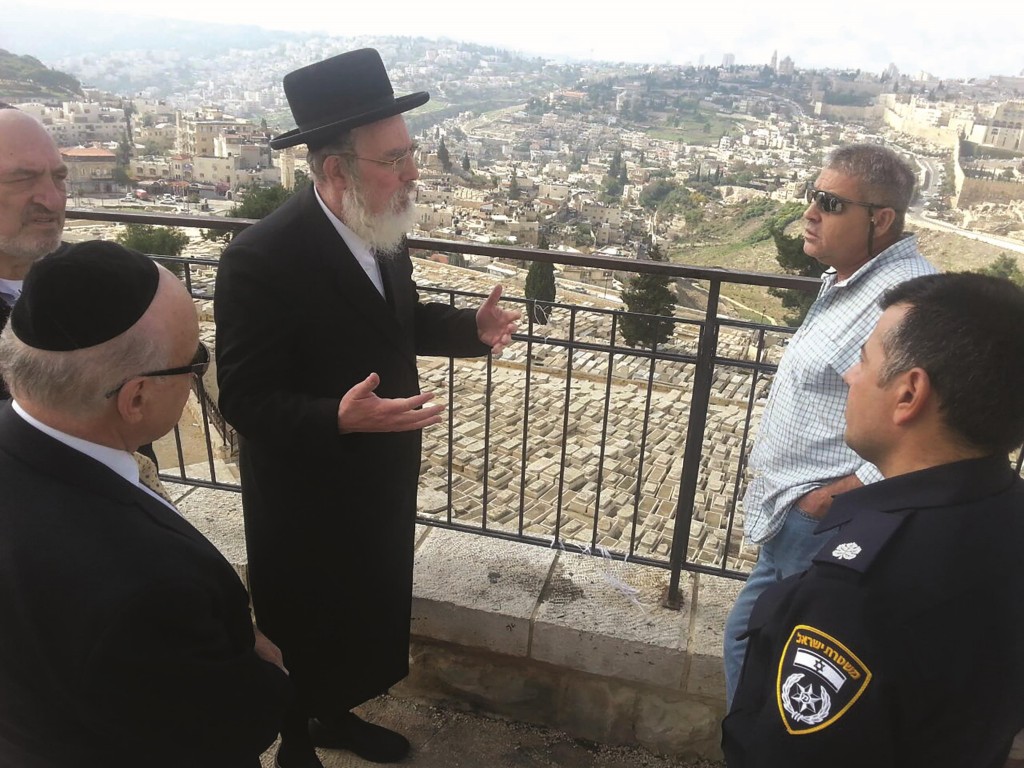 Following a week of intense negotiations with leading government officials on the security of Har Hazeisim, there was optimism that progress was being made. Menachem Lubinsky, co-chairman of the International Committee for the Preservation of Har Hazeisim, met with members of Knesset, officials in the Prime Minister’s Office and the Jerusalem Development Authority during his urgent visit this week. The issue of Har Hazeisim was also raised in a meeting with Prime Minister Benjamin Netanyahu a week earlier by Malcolm Hoenlein, Vice Chairman of the Conference of Presidents of Major American Jewish Organizations, and a leading  executive committee member of the ICPHH.

In his meetings, Mr. Lubinsky urged the government to build a high-tech fence or wall around the entire 3,000-year-old Jewish cemetery of Har Hazeisim, which includes more than 150,000 graves, to prevent  vandalism in the cemetery. In a visit to Har Hazeisim with MK Yisrael Eichler (UTJ) on Tuesday, November 25, Mr. Lubinsky met Captain Avraham Saar, who is responsible for the police station on Har Hazeisim, and Micha Marsh of the Ministry of Housing and Construction, who heads the private security detail on Har Hazeisim. Rabbi Eichler had earlier written a letter to the prime pinister urging the immediate construction of a gate around the site. The security officials noted that despite the ongoing unrest in many parts of eastern Yerushalayim, the cemetery itself was largely free of vandalism — with the noted exceptions of the two horrific events on the chelkah of Ger, where nearly 50 graves were damaged or destroyed, as well as many as 10 of the 137 surveillance cameras. Most of the cameras were already repaired.

The officials believe that the  chelkah of Ger was specifically targeted because it is one of the most visited sites on Har Hazeisim and considered by the Arabs to be a religious site of significance in their new “religious war” against what they perceive to be a change in the status quo on the Har HaBayis. The security analysts say that most of the terror acts in Yerushalayim of late are part of this “religious war.”

In addition to the gate or wall, leaders of the ICPHH are continuing to press for additional police at the huge cemetery. It is believed that no more than a dozen officers (over three shifts) are assigned to the police substation. “The station must revert to a full station with at least 50 officers, detectives and the capacity to file complaints,” said Mr. Lubinsky. Rabbi Eichler also stressed the point that police and private security officials currently escorting people on Har Hazeisim should team up. “Every jeep of the private security should include a police officer who has the power of arrest,” said Rabbi Eichler.

Officials also hope that a new law expected to pass the Knesset any day, imposing heavy penalties on rock-throwers, should also help reduce incidents of violence on Har Hazeisim. The law, introduced at the behest of the ICPHH, will impose sentences of up to 20 years for a rock thrown at a moving vehicle. It also mandates a sentence of as much as 10 years if thrown at a person.

One of the key activists for security on Har Hazeisim who had helped pass the law is Miri Regev (Likud), who chairs the Knesset Interior Committee. Ms. Regev has already held a number of hearings on the subject of Har Hazeisim. She told Mr. Lubinsky that she plans to play a major role in the construction of the gate on Har Hazeisim, and that she will continue to hold hearings to monitor the security situation there. In addition to MKs Eichler and Regev, Mr. Lubinsky also met with MKs Dovid Azulai (Shas) and Yaakov Litzman (UTJ).

In other developments, the government is preparing to sign an agreement with a local Arab contractor to do daily sanitation and cleaning on Har Hazeisim. The work will be supervised by officials of the Yerushalayim Municipality. Negotiations also continue on the construction of a Visitors Center as well as a new transportation hub, which will include a cable car.